Taking Catan to the Next Level with Expansions - Nerdist

Taking Catan to the Next Level with Expansions

Catan is rightly credited with being instrumental in ushering in the eurogame to American audiences. The rules are simple to explain – removing or reducing one of the biggest barriers to entry into board gaming.  The theme isn’t war or fantasy (or fantasy war), but instead about settling a remote island.

Catan will last you dozens of plays – especially if it was one of your first introductions to hobby gaming. But when you’re ready to grow out from Catan, there is no shortage of extensions. You can add 5 and 6 players. There are numerous scenarios and you can find a ton of standalone games using the Catan system. But it has also spawned four major expansions that you can add to the game you already know and love. 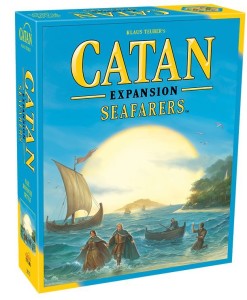 Seafarers takes the roads of the base game onto the ocean. The board is no longer all one big island but instead multiple lands. You can have several smaller islands or perhaps one big one with some satellite offshoots. To get from one island to the other, you build ships along ocean hexes that are treated much the same way as roads. Building the first settlement on a new island gives you a bonus victory point.

Seafarers takes everything you love about Catan and simply enlarges it. You have a bigger board and more ways to travel. Even so, you can get in each others’ way just the same. Like roads, the shipping lanes can block other players out and you can get some cutthroat maneuvers.

This is the simplest addition to Catan as it merely increases the playing space without significantly enlarging the ruleset. 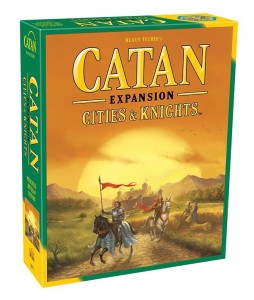 But if you do want to enlarge the ruleset, this is it. Cities & Knights adds a ton of new stuff. Instead of double producing, Cities can now make refined goods of Coin, Cloth, and Paper. Those refined goods can then be turned in to increase your progress which gives you better access to cards. Meanwhile, barbarians are invading slowly but surely. You have to secure the aid of knights to fight them off. If you don’t, they could sack one of your cities turning it into a settlement.

This is, without a doubt, the best expansion created for Catan. Without deviating too terribly from the base game’s core system, it creates new strategic layers and original competition. The largest army bonus is replaced by victory points for knights that fight off barbarians. The progress cards are replaced by a new set that are acquired automatically – if you have invested in refined goods.

Cities & Knights takes overlooked or banal facets of the base game and makes them exciting and intriguing. It can also make the game a little meaner. You might want to start crafting some thick skin. 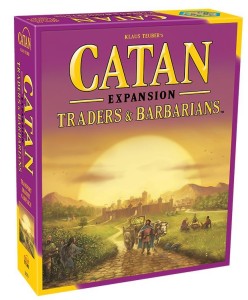 Rather than expand the entire game as the previous two titles did, Traders & Barbarians introduces the use of five new modules – some of which can be combined together. They run the gamut from relatively easy things – like adding a fishing resource – to highly complex endeavors – like creating trade routes for glass and other new goods.

Traders is mostly for players who have played a lot of Catan. The best scenarios are also the most complex ones and aren’t really suitable for players new to the system. Plus, the scenarios are a little uneven. While all are interesting and worth playing, a few truly stand out.

My personal favorite is the Barbarian scenario where they come to invade Catan. But unlike in Cities & Knights, they aren’t merely repelled and sent home. Instead, they come to colonize the island. So you have to deal with barbarians taking over your land and stealing the crops surrounding your city.

If even Cities and Knights is starting to feel played out, then you definitely should take a gander at this one. 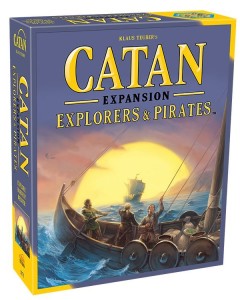 The most recent expansion has followed largely in the footsteps of its predecessor. Rather than take a stab at addressing every aspect of the game, Explorers & Pirates implements five new scenarios that you can layer on top of the base game. And in combination with some of the other expansions.

Like Seafarers, there are multiple islands. But now, some are face down and you must explore them. Explorers and Pirates also replaces cities with ports which provide similar bonuses. And, depending on the scenario, you might have to fight pirates, travel to the spice islands, or try your hand at the fishery. And, within the scenarios, there are even new missions that can be completed by the players.

Explorers & Pirates feels like the halfway point between Seafarers and Cities & Knights. It does more than Seafarers so you feel like you’re getting a grander experience. But it doesn’t ramp things all the way to Cities & Knights level. Or, at least, it does it through scenarios that allow you to compartmentalize the additions.

What is your favorite way to play Catan? Tell us about it in the comments.