Take Command of Magic On The Tabletop In ARCHMAGE - Nerdist

Take Command of Magic On The Tabletop In ARCHMAGE

People love wizards. Classic wizards, space wizards, dog wizards, it doesn’t matter. The power and majesty of magic is one of the big reasons why fantasy books and fantasy gaming reign supreme. People also love wizard schools, and they would hop at the chance to go to one if they had the opportunity.

Game designer Tim Heerema takes this idea one step further with his game  Archmage (published by Starling Games), pitting players against each other to build a new school of magic after the old one is destroyed. The game is a mixture of worker placement and area control that’s dripping with theme. We got a chance to play Archmage during Gen Con week and have returned with this scroll of information. 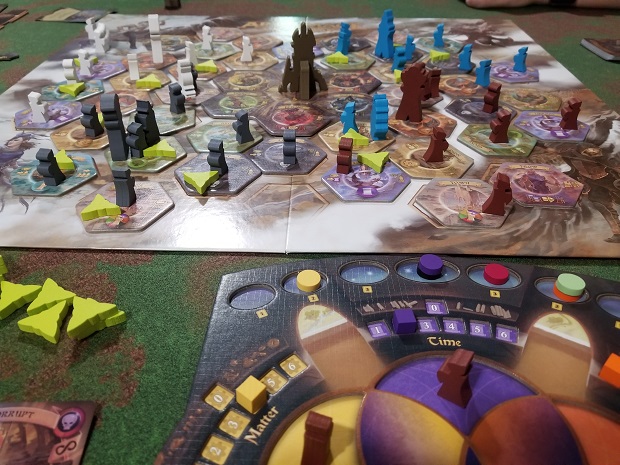 Players start by building the world of Archmage by shuffling random hexes and laying them out based on the number of players. The center of the board is where the ruins of the old Archmage’s tower are, still polluted with the poisonous magics that ended their reign. The tower is surrounded by the enclaves of the other fantasy folks that know the secrets of magic like Elves, Dwarves, Dryads and so on.

The players are all human because, in this world, humans have the unique ability to blend the specific magics of the others into something more powerful. Players explore the board to collect relics prized by the enclaves, because those relics are exchanged for the player’s apprentices to be taught the magic that each enclave knows. Unfortunately, one enclave, the Demons, practice blood magic, and the only way to gain blood relics are to consecrate them with the blood of wizards. That means killing the acolytes of the other players on the board. 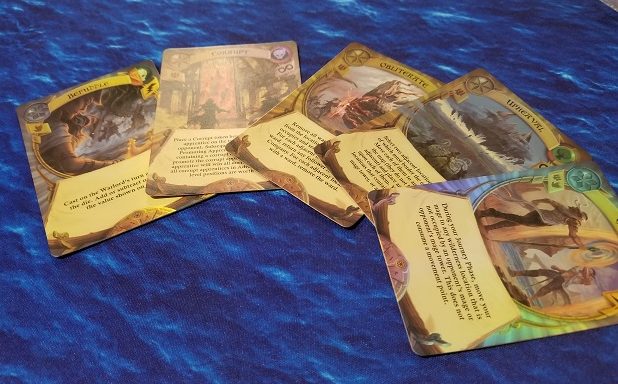 The other half of the game focuses on the player building their mage tower and style of magic. A gorgeous color wheel represents the six schools of magic and how they interact with each other. When an apprentice learns a school of magic, the player gains access to its basic spell from a common pool. Spells are an important element of the game because they let players break the rules and they also are the main source of victory points at the end of the game.

To access more powerful magic with bigger effects and more victory points, players must pit their apprentices against each other in duels. Two apprentices enter the duel with each one representing a different basic school of magic. One becomes more powerful, unlocking a more powerful spell that blends the two schools. The other returns to the player’s pool of general workers stripped of their power. Players run the risk of losing access to weaker spells if no apprentices remain that practice the basic school of magic, so it’s important to balance putting apprentices on the board to hold areas vital to getting the resources to build a school and having them throw down with each other at the wizard’s tower to get the school more power. 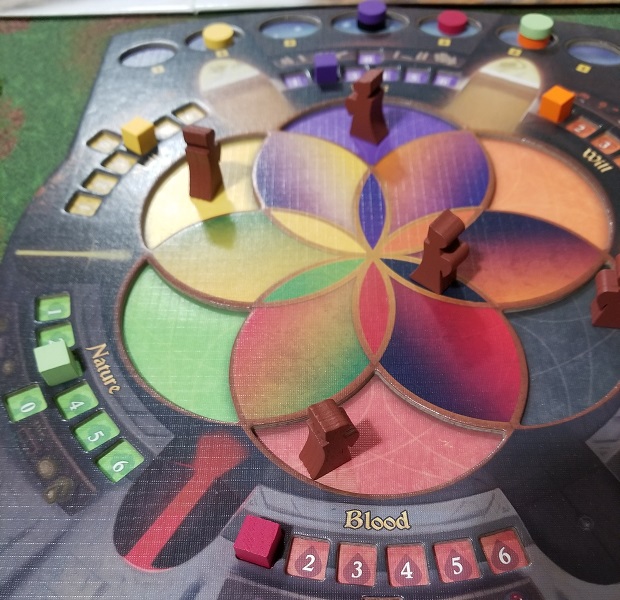 The game’s timing mechanic is also very clever and thematic. Each player has an observatory at the top of their mage tower represented by colored spheres. The player chooses which sphere to move when, which grants them a relic of the corresponding color. The player chooses how to set these planet pieces up initially, which sets the starting resources for the player and offers a suggestion of the strategy they might lead with. The endgame begins once all the planets align on the central space. Everyone takes a final turn and the time to choose the new archmage has come because the stars are right.

Archmage’s gameplay nails the feeling of being a powerful wizard who wants to become THE powerful wizard. The master level spells that combine three schools of magic can really wreck a rival’s day. The components enhance this feeling by adhering to a 70s album cover aesthetic in the art.

Thanks to the successful Kickstarter, each mage has a unique meeple to represent it on the board along with their mage power. The spell cards have a foil effect that make them look like pages ripped from a spell book. Starling Games offers both a regular and deluxe version of the game which comes with a gameboard that helps with tile setup and provides a bit more of the blasted lands that the mages must explore.

Fans of fantasy settings and thematic games should put on their best pointy hat and check out Archmage. It’s easy to be spellbound by the experience.

What kind of wizard is your favorite? Tell us in the comments!