T.I.M.E STORIES Heads to the Caribbean in Brotherhood of the Coast

Let’s play catch-up: If you haven’t heard of T.I.M.E Stories then lend me your ears and focus. This 2015 release from Space Cowboys was at the forefront of the tabletop narrative puzzle/escape room movement. This isn’t exactly like Unlock! or Exit, rather it’s a full-blown system of visual choose-your-own-adventure with a dose of puzzles.

It’s about exploring panoramas and working your way through a story. Those riddles and cognitive challenges play second fiddle to the unfolding narrative. In many ways, it’s the inverse of Unlock!

Brotherhood of the Coast is the 7th expansion which makes it the 8th scenario including the base game’s Asylum. You can’t replay these adventures as they’re one shot affairs. Swallowing up the clues and discovering the secrets is the main pull of the design. The system and base box then function as a sort of console with each new expansion plugging in like a cartridge. 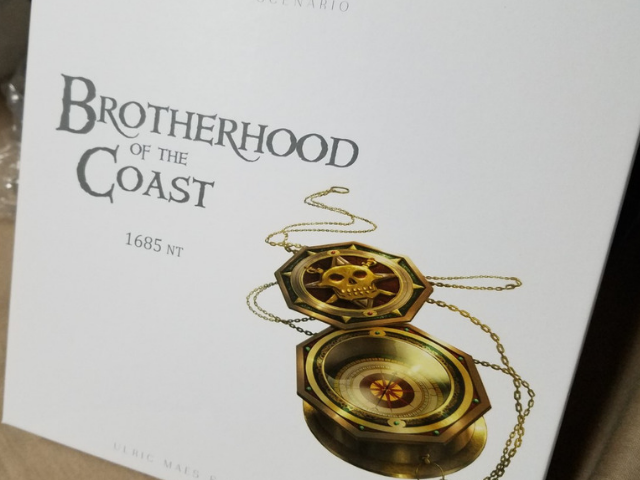 These diverse experiences have taken us across time and space. The game has this bonkers time travel setting where you perform missions for the agency. It’s difficult to talk about without spoiling the overarching meta-story, but the basic concept is that your group heads to different locales to fix or prevent anomalies in the timeline. The science is grey and the true setting residing in the background only comes through in bits and pieces. These morsels are tantalizing, however, and keep us returning for the next scenario release every three months or so.

To break this down in typical tabletop gaming parlance, this is a cooperative design. You splay a set of large cards across the board in a horizontal line. They form a panoramic view of a room or vista. The group discusses who should visit each nook and then splits apart by placing their pawns above the card they wish to explore. You then flip the card, read some text, and possibly roll some dice to make a test. Sometimes you’ll be accosted by villains wanting to gut you. Other times you’ll run into a merchant selling items. Maybe you come across a futuristic artifact buried in ancient Africa. You never quite know – that’s the magic.

As you perform actions you will eat up time. This track dwindles and eventually you reach the terminus. No worries, in a plot reminiscent of the great film Groundhog Day, everything resets and we can do it all over again. The idea is that this time you can avoid the hazards and red herrings and drive straight towards your goals. While sometimes tedious, the system does work the time track provides a necessary element of tension.

Now we must get back to this newest trip. Brotherhood of the Coast has us visiting the Caribbean in the age of sail. You’ll cross the high seas, run into merchant vessels, and attempt to track down a group of four renegade brothers. Swashbuckling and intrigue are on the day’s menu. 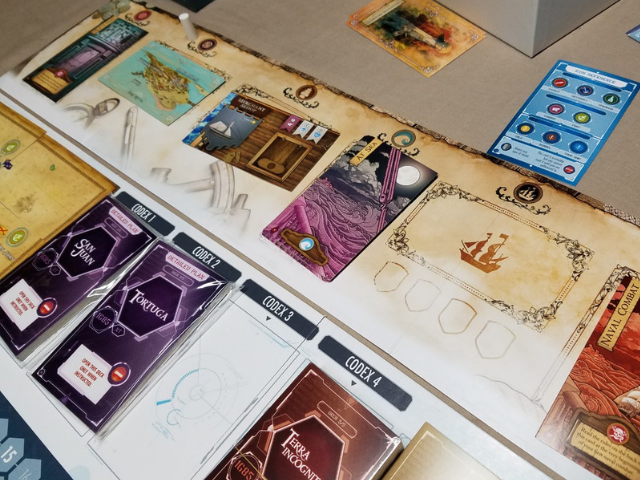 Each T.I.M.E Stories module has its own flair. They bring in new mechanisms and use the generic tokens and resolution rules for various creative endeavors. Here we have ship combat. It’s pretty basic stuff with repeated rounds of rolling fistfuls of dice and trying to damage your foe.

The interesting element is in managing your ship. As you gain gold from raiding merchants or digging up treasure you will find opportunities to spend it. You can purchase entirely new ships with varied stats and special abilities. While the game will often have you reset characters and return items to the deck in between runs – that is, when your time runs out – this scenario allows you to keep your ship. So it’s not only a money sink and a badass piece of piratical hardware, it’s also a safety net.

Supplementing your vessel are a multitude of crew. Each offers a special ability to assist in combat or navigation. You will travel between islands and brave the dangers of a wild sea. Buffing up your capabilities and filling out your ship with a skilled group will make a substantial difference.

As is often the case with this design, there is a bit of looseness in the rules surrounding this. Many of the sailor abilities will combo in extremely effective ways, however, there is a lack of clarification on whether you can modify die results twice and timing of such. With this game you’ll simply need to remain nimble with the challenges and make a judgment call. This is the downside to releasing expansions without their own personal rules booklets and instead relying on reference cards and a minimalist approach.

The story is of course the main reason we play this game. Brotherhood of the Coast offers a very solid narrative full of difficult decisions. It contains only a single puzzle, whose quality is solid, and instead focuses on action and exploration. There is a great deal of power afforded to the group as you face a split path in your journey. I’m twisting in my seat trying not to spoil this delicate situation, but the end result is effective and unique.

The meta-story is also progressed a few yards. This is one of the most significant factors in the game’s promise – referencing an ongoing narrative linking the series of adventures. Frankly, it’s often struggled to really come through and fulfill its potential. While it’s still not firing on all cylinders, there are some interesting developments and the finale leads to a significant occurrence on the horizon.

I’ve stuck with T.I.M.E Stories since day one and bear no regrets. It’s certainly not a perfect system and still struggles to bloom within its unique format. Yet it also continually presents a compelling narrative and a gripping experience that’s unlike its peers. Brotherhood of the Coast comes through in this regard and places itself as one of the stronger scenarios in the line.

Have you played T.I.M.E Stories? Let us know in the comments!  And be sure to join host Becca Scott on  Game the Game every Thursday here on Geek & Sundry to watch the best boardgames played with fantastic guests!