Alright, who’s in the mood for sushi? If it’s you, make sure to have samples of your urine, saliva, and feces ready because they’ll be needed to 3D print the ideal fish n’ rice cubes to meet your nutritional needs. Or at least that’ll be the case if you go to the “Sushi Singularity” restaurant when it opens in 2020 in Tokyo.

While regular sushi is one of the most delicious melt-in-your-mouth fresh food options out there, it’s never made specifically for you. Well, sometimes it is, but never as specifically as Sushi Singularity will make it. That’s because the futuristic restaurant, briefly imagined in the clip above (which comes via Futurism), wants its customers to send in samples of their bodily fluids two weeks prior to their actual reservation date so their meal can be tailored to their dietary needs.

The restaurant is the brainchild of Open Meals, a Japanese food tech company that’s looking to revolutionize the culinary world with the “digitization of food.” According to the company’s site, this digitization of food is the natural next step in food production’s evolution, which started with fire, shifted to agriculture, and then moved to preserved foods that were ultimately mass produced. From fire to robots that 3D print custom-tailored sushi in just 1.5 million years — way to go Homo sapiens! 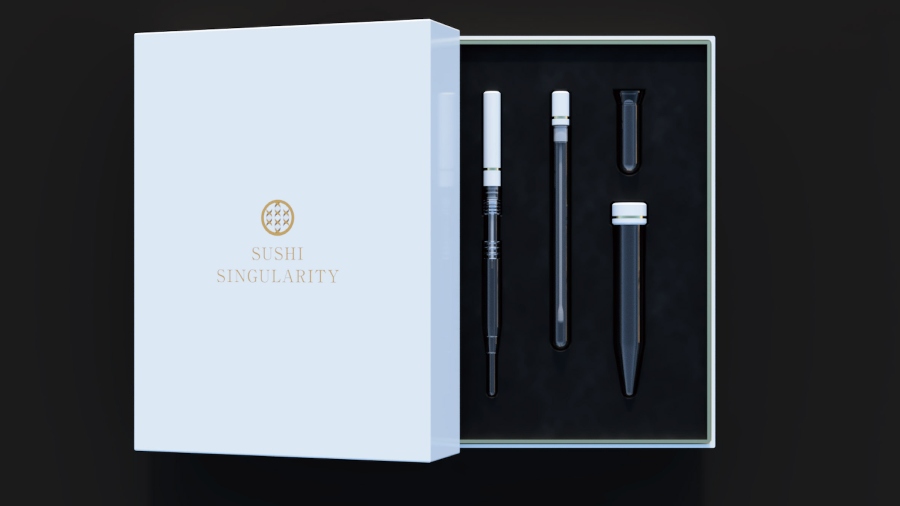 If the idea of 3D printing sushi at all sounds like a pipe dream, stuff the video below of Open Meals’ robot arm 3D printing sushi in your dream pipe and smoke it! Just kidding. But really, Open Meals can already 3D print edible sushi, and if it can do that, it seems plausible that it could tailor said sushi with specific nutrients based on what your body needs.

Speaking of which, Open Meals plans on figuring out what your body needs by sending you a “health-test kit” (pictured above) that’ll be returned to the restaurant with your bodily fluids for analysis. No details have been given yet as to how exactly you’ll be expected to get your feces, urine, and saliva into the kit’s vials — no gloves are pictured! — but hopefully nobody ever mixes up which fluid goes in which tube. That could really ruin your appetite!

What do you think about the Sushi Singularity? How many hundreds or even thousands of dollars do you think it’ll cost to dine at a joint like this? Let us know in the comments!