Stunning Views of Himalayas Thanks to Dip in Pollution - Nerdist

Stunning Views of Himalayas Thanks to Dip in Pollution

Although the silver linings of the COVID-19 pandemic have been few and far between, one positive side effect of the international crisis has been a letting-up in the amount of air pollution around the world. And while we’ve seen this phenomenon vividly evidenced in satellite data, taking in real, vibrant landscapes freshly emerged from a haze of smog is still a sight to behold. Recent pictures of the Himalayas, taken post countrywide lockdown in India, stand as one particularly stellar example of that fact.

So my cousin sent me this.... You can now see the foothills of the himalayas in Himachal from Punjab, thanks to the lockdown and low pollution. This is #Jalandhar. 💫⭐🥰 #IndiaLockdown #IndiaCorona pic.twitter.com/bjNsyWsdUJ

Bored Panda recently put together a hefty compilation of some incredible pictures of the mountain range, which were posted to Twitter by people in northern India after the country’s lockdown went into effect. Like most other major countries around the world, India has instituted a national lockdown in the hopes of combatting the spread of COVID-19. And, as has been the case in most—if not all—of the other countries that have instituted lockdowns, there has been a subsequent drop in pollution. This is in thanks to a massive decrease in the amount of pollutants being emitted by cars, planes, and anything else that burns fossil fuels.

Never seen Dhauladar range from my home rooftop in Jalandhar..never could imagine that’s possible..clear indication of the impact the pollution has done by us to Mother Earth 🌍.. this is the view pic.twitter.com/laRzP8QsZ9

“It’s unbelievable to see the mountains from my home town,” Harbhajan Singh, a cricket player living in the Jalandhar district in Punjab, told Bored Panda. Singh, and others living in the Jalandhar district, are only about 125 miles from the Himalayas which, according to the Encyclopedia Britannica, have an average elevation of more than 20,000 feet. For reference, One World Trade Center is 1,792 feet tall. 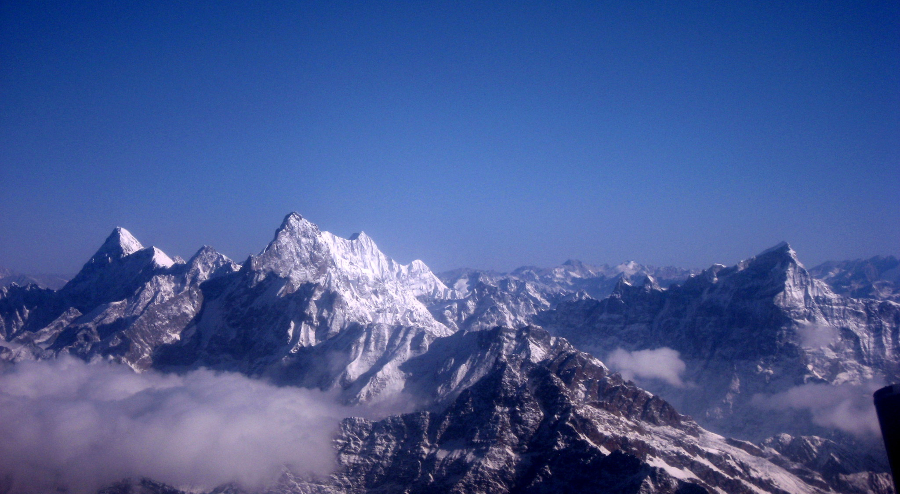 A glimpse of the Himalayas from a plane window. wonker

Singh’s sentiment is echoed by many of the people posting similar pictures of the post-lock down Himalayas. Manjit K Kang, a banker who calls Punjab home, writes that, “For the first time in almost 30 years [people] could clearly see the Himalayas due to India’s lockdown….” ‘

Himalaya mountains can be seen from Jalandhar since pollution has reduced in Punjab. Beautiful sight 😍#punjab #COVID19 #pollution pic.twitter.com/iZy7hwxX9R

India’s Prime Minister, Narendra Modi, ordered the lockdown on March 24, and it will likely be extended beyond its initial timeframe of 21 days. That will undoubtedly mean more clear views of the Himalayas for people in Punjab, and hopefully, a good distraction for anyone worrying about how long these worldwide quarantines will last.

This was the view from our rooftop at home in Punjab India. For the first time in almost 30 years could clearly see the Himalayas due to India’s lockdown clearing air pollution. Just amazing! 🙏🏽 pic.twitter.com/WmWZYQ68lC

What do you think about these images of the Himalayas taken during the midst of India’s nationwide lockdown? Clarify your thoughts in the comments!