Stealth is Your Weapon in V-Commandos - Nerdist

Stealth is Your Weapon in V-Commandos

When you think of small unit World War II action, it’s usually romanticized explosions and hard-nosed grit. Stuff like The Dirty Dozen and Kelly’s Heroes paint a bright picture of Hollywood violence. V-Commandos shakes its helmeted noggin at the idea of Bay-esque explosion, opting for an approach of stealth and espionage. The most Hollywood it gets is perhaps a nod towards the Richard Burton/Clint Eastwood classic Where Eagles Dare, although you won’t be gunning down dozens of Nazis when the alarms start ringing.

The closest parallel to this shiny new board game is unsurprisingly the PC classic Commandos. You have a small team of Allied soldiers with mixed nationalities and different specialized skills. The group is cooperating to take on a unique map, attempting to accomplish a stealthy objective without raising too much attention. Alarms can get triggered, troops can swarm, and all hell can break loose. 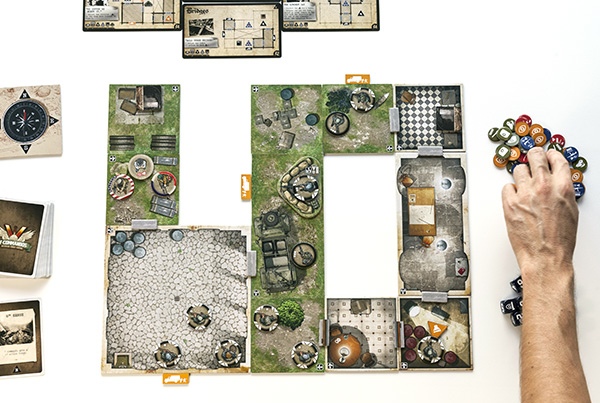 Upon first glance you’ll note the visual similarities to a typical dungeon crawl table-top game. You have modular tiles of rooms and outdoor spaces that are connected in various ways, enemies clogging up approach vectors, and gear to be acquired and fawned over. Enemy troops are controlled by a simple AI and will work hard to put a boot to your throat.

And if V-Commandos was simply a WWII dungeon crawler that would probably be enough. But the fact that it changes up the structure to focus on stealth pushes the game far into the realm of excellence. This really is a different animal altogether and is unlike any board game you’ve ever played.

Missions are typically small encounters that last around 30 minutes or so. You can link several different clusters of terrain together to form extended operations and mini campaigns. Objectives are varied and each setup forms a tactical puzzle where you need to assemble the proper team and hit the right technique to thwart the Nazi machine. 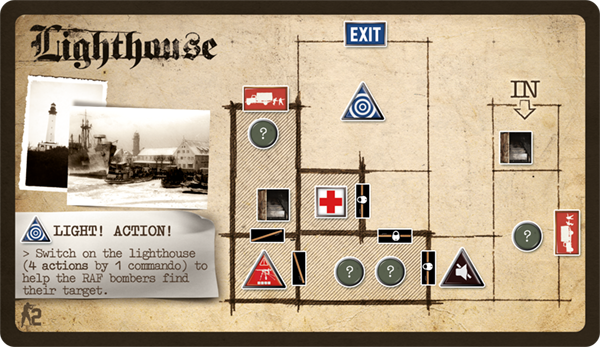 The variety here is outstanding. There are dozens of scenarios and you’ll blow up Panzer depots, secure vital documents, and escort prisoners. Thematically it’s all very appropriate and fuses with thrilling tactical gameplay. Tension naturally rises as the situation devolves and more Wehrmacht patrols arrive. If you’re not careful to maintain stealth the alarm will ring, and fresh troops will arrive en masse. That natural curve of pressure keeps your focus and constrains your acuity as the atmosphere is smothered.

There are a solid number of toys you can acquire from dead guards to spice things up. You can nab sub-machine guns, hand grenades, and even don German uniforms that abet concealment. Most of the fiercer hardware you will want to avoid using at all costs. This isn’t a Tarantino flick, once the alarm hits and elite troops pay a visit you won’t want to get caught in an extended firefight. Still, occasionally calling in an airstrike or detonating charges on a tile and blowing the hell out of Hitler’s finest is extremely satisfying.

While V-Commandos has more going for it than Lee Marvin–short playtime, unique mechanisms, supports 1-4 players–there also are a few caveats. The balance here is pretty solid and this game has seen a great deal of play-testing, however, you will occasionally hit situations where it’s simply too easy. There are scenarios that due to random setup and scoring some lucky die results will be accomplished without incident and in very short order. It feels a bit like your MP40 just jammed and that’s more “nein!” than “ja!” Fortunately, more often than not the game will deliver those tense climactic finales. 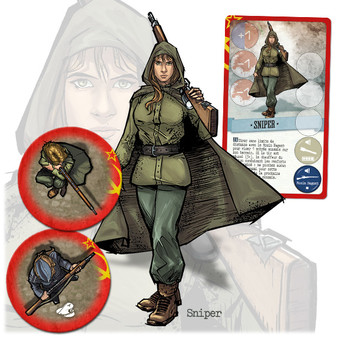 gamers have grown accustomed to massive lots of Kickstarter miniatures. It’s certainly subjective and a minimal issue as the artwork on the entire game is absolutely gorgeous and top-notch. I’m a miniatures guy through and through (my in-laws think this hobby includes sitting in the basement playing with action figures), but V-Commandos is a game that absolutely works without them. I wouldn’t change a thing about this game when it comes to visual presentation or form factor.

Finally, the rulebook reads well and conveys the information it wants succinctly and with clarity, but you’ll find edge-cases crop up that aren’t covered. Since this is a cooperative game it’s simple enough to just decide what to do as a group and move on. However, if your elite group of trained warriors includes a high ranking rules lawyer you may want to pre-emptively abort the mission. Just shove that potato masher out the plane before you hit Normandy.

Despite its uniform’s wrinkles, V-Commandos is extraordinarily solid. The stealth mechanics are thoughtful and tease out exceptional moments. Narrative pours out of this game as the situation unfolds and the unpredictable happens. You’ll reminisce on that time those Stukas bombed their own compound, or you blew that charge and wiped out an MG42 team that was tearing up your sniper.

What’s more surprising than those narrative twists is that this is an independent release from Quebec publisher Triton Noir. This is the type of game that due to unavoidable circumstances will fly under the radar. For those who take the chance, you’ll be rewarded with a remarkably professional design that wears its heart on its sleeve. Grip your K-Bar tightly and fade into the shadows for the fate of the free world is in your hands.

Do you have a soft spot for WWII board games? Does V-Commandos look right up your alley? Let us know in the comments!

All images courtesy of Triton Noir