A Shot-by-Shot Breakdown of the RISE OF SKYWALKER Teaser

The final episode in the most epic family saga in the galaxy far, far away didn’t just get a title at this year’s Star Wars Celebration—it got a surprise teaser! Now we can begin the countdown to The Rise of Skywalker. What can we expect from the final installment in the trilogy? We’re breaking down everything from our first look at the film to see what ancient secrets we can find.

The teaser opens with Rey, sweaty and breathing heavily, on a desert planet. We then hear Luke Skywalker’s voice saying, “We’ve passed on all we know. A thousand generations live in you now. But this is your fight.”

As Rey stares across the otherwise empty planet, she reaches for a lightsaber. We see it is Luke’s old lightsaber, the one that belonged to his father Anakin. The screen then reads, “Every generation has a legend.”

We then see a ship coming, as Rey readies herself to turn and run.

Who is flying the ship? The only clue we have is a shot of its driver’s ( or maybe Driver’s?) leather gloves gripping the wheel.

Rey doesn’t look scared as she starts to run, because it turns out she isn’t running away from it at all. She’s getting in position to leap over it as it flies by her at full speed.

Is this an attack by the First Order—possibly even Kylo Ren? Maybe, but this could very well be a training exercise that shows how Rey has harnessed her powers since The Last Jedi ended. (There will be a time jump of at least a couple of years between the two films.) We wouldn’t even rule out that she’s training with Kylo Ren to take on an even greater evil we’ll learn about later.

From there, we see a ship heading to a city on a cloudy, dark planet. This might be an entirely new planet in the franchise, but it does remind us of Eadu, where Galen Erso died in Rogue One.

Next, we get a shot of a helmet-less Kylo Ren slicing through enemies as he fights through a forest that looks to have seen better days.

This is a larger attack, as Kylo is supported by stormtroopers.

Any chance this is the forest moon of Endor? We can’t rule it out, especially after the way this teaser ends.

But before we get to that, we have somebody who doesn’t seem to like Ben Solo’s face. The very next shot shows some very hairy hands fixing the old helmet he destroyed in The Last Jedi. Who is fixing it and why? 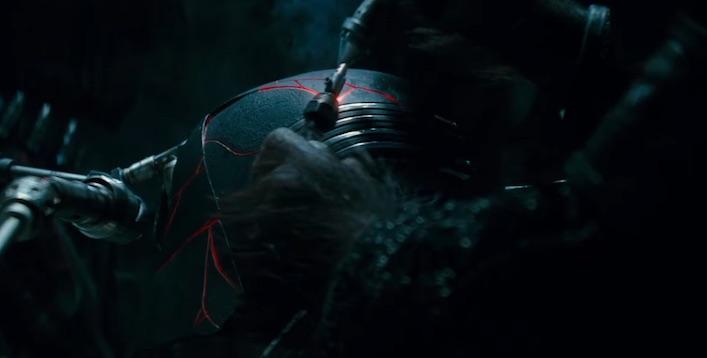 Next, we see three pairs of good guys. The first pair is Finn and Poe on what looks to be the “adventure” J.J. Abrams alluded to at the Star Wars Celebration panel during which the teaser was released.

The second pair is BB-8 and the series’ newest droid, the little single-wheeled Dio.

The third pair, a reunion over 35 years in the making, is even better. We see a smiling Billy Dee Williams as Lando Calrissian (looking as suave as ever) driving the Millennium Falcon with Chewie in the co-pilot’s chair.

The next shot shows a speeder being fired at by what looks like a stormtrooper. Is this the same desert planet we saw Rey on at the beginning of the trailer? Also, is that a racetrack of some kind the speeder is driving on? Is there a chance this is Tatooine and that’s an old pod racing course? J.J. Abrams has said this film will tie all three trilogies together…

And who are these jet-pack stormtroopers chasing?

Finn, Poe, and C-3PO. These are the same clothes we saw them wearing from the earlier shot, so whatever reason they have for being on that desert planet is enough to have the First Order trying to kill them.

After a quick shot of a burning ship about to crash, we see one of the most famous medals in the galaxy far, far away: the one Leia gave Luke and Han at the end of A New Hope.

We’re not joking. This is a powerful token dating back to the original film, and it carries a tremendous amount of importance to the characters and fans.

And as if that weren’t enough, we then see the General Leia hugging Rey.

We can’t find the right words to capture how this makes us feel. Fortunately Daisy Ridley does that for us.

During this shot, we hear Luke say, “We’ll always be with you. No one’s ever really gone,” in case you weren’t an emotional mess. But it’s not just about saying goodbye to the late Carrie Fisher, because we then end on a truly shocking note.

Rey, Finn, Poe, Chewie, C-3PO, BB-8, and Dio come to the edge of a cliff in a rainstorm, and among the crashing waves is a piece of the Death Star.

That’s ominous enough, but just as Luke finishes saying, “No one’s ever really gone,” we hear the iconic laugh of Emperor Palpatine. And as though we wouldn’t recognize that cackle anywhere, Ian McDiarmid appeared on stage at Star Wars Celebration after the teaser ended to confirm a shocking return.

Will Palpatine be resurrected? Has he been alive this whole time—in some form—after having learned how to save himself from death from his master Darth Plagueis? Or will we find out he’s a Sith Force Ghost? They exist in canon; Mark Hamill himself voiced the Sith Ghost Darth Bane on The Clone Wars. 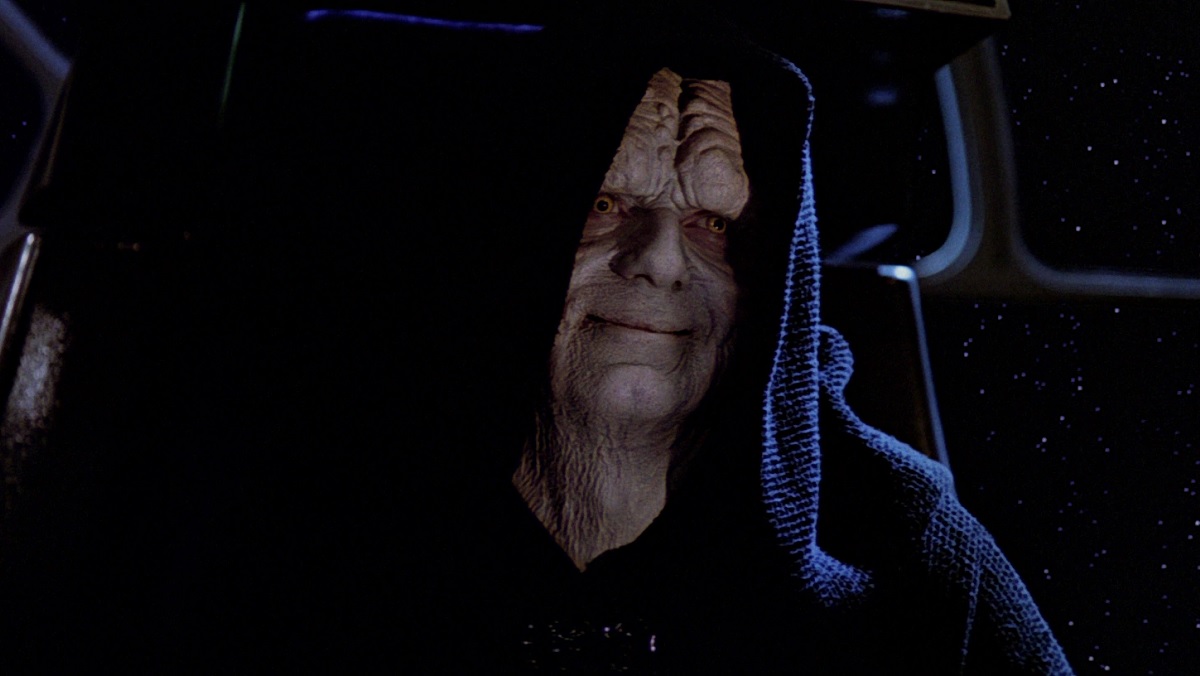 Be he alive, cloned, resurrected, or living on the back of Professor Quirrel’s head, has Palpatine been manipulating Kylo Ren this entire time? Was he controlling Snoke? Did he turn Ben Solo to the Dark Side as the ultimate revenge on Luke Skywalker? We have roughly a million questions (and soon enough will have just as many theories), but first we also got the official title, which might also reveal something about the movie.

The title card is in purple, a first for the franchise.

Know what you get when you add the red of the Sith and the blue of the Jedi? The Rise of Skywalker, which might finally bring a true balance to the Force.

What we don’t know yet is which Skywalker will be rising to bring it to the galaxy far, far away.