If you’re feeling excited about the upcoming Star Wars: Squadrons game, pay attention. I have some Star Wars pilot action to share. Alexander Freed’s Shadow Fall continues the story from Star Wars: Alphabet Squadron. The titular group of New Republic pilots is an absolute mess. Their leader is Yrica Quell, an Imperial defector. Every member of the squadron carries heavy baggage. Plus the Alphabet Squadron came together in a weird time of transition after the end of the Galactic Civil War. The New Republic is rising, but the Empire’s remnants stubbornly cling to the galaxy. In this second book in Freed’s trilogy, Yrica Quell’s Alphabet Squadron continues to hunt the deadliest TIE fighters in the galaxy: Shadow Wing. 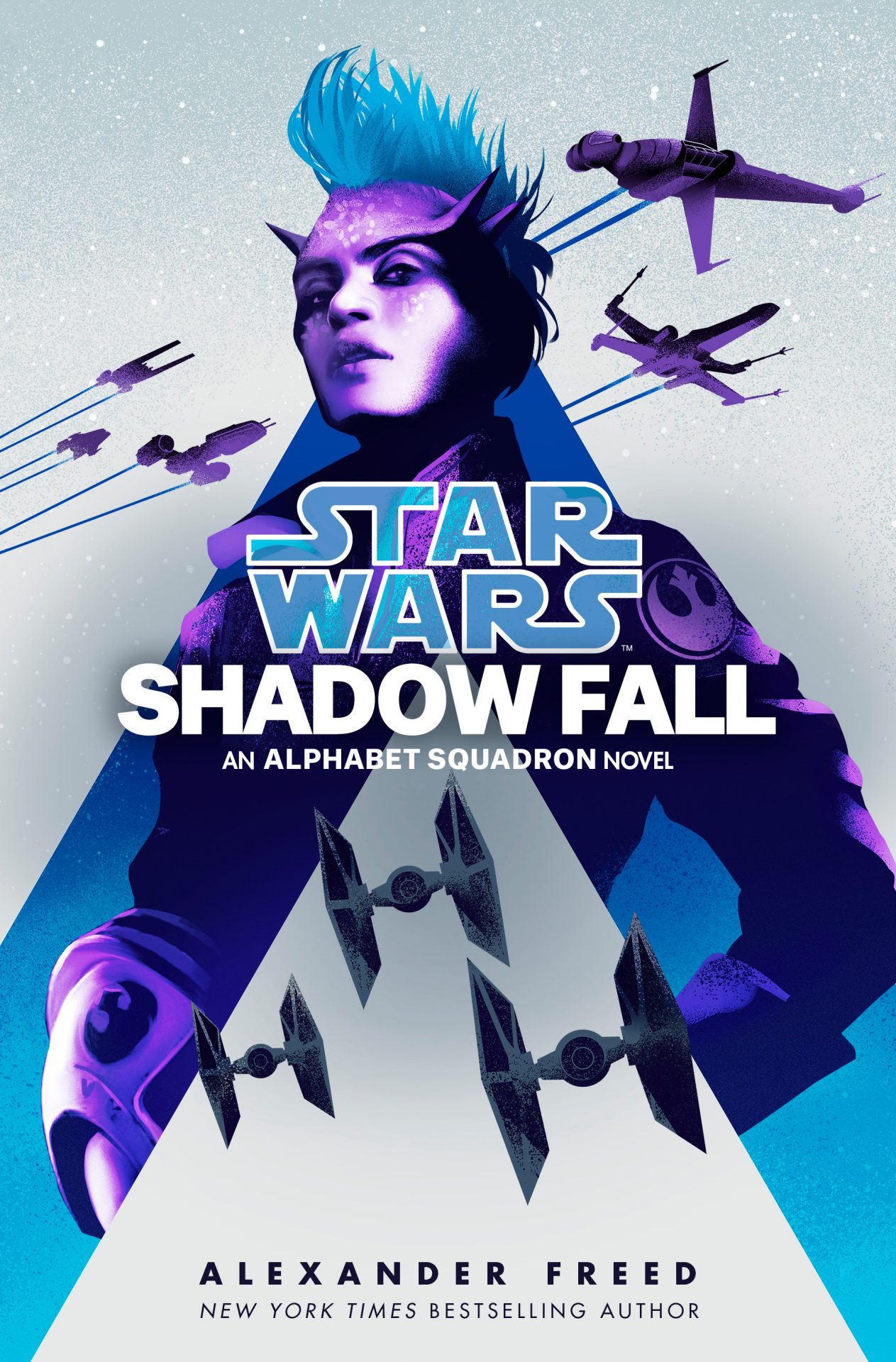 The first book was packed with starfighter action, complex relationships, and pilots doing their darn best despite the traumas they carry. I expect no less from Shadow Fall. Especially since they’ll be dealing with a new enemy: Soran Keize, last of the Imperial Aces. Oh and did I mention Shadow Wing is the elite Imperial Navy Squadron Quell once flew with? Yeah.

Nerdist is excited to share an exclusive excerpt from the upcoming novel that speaks to the intensity of the book. Kairos, a U-wing pilot in Alphabet Squadron, finds herself in a dangerous situation. I am worried on her behalf. Listen to the excerpt from the Shadow Falls audiobook (performed by Carol Monda) or read it below.

There were words Kairos did not understand.  Even after years of exposure, she struggled to comprehend the intricacies of the language so demeaningly called Galactic Basic. But words were not always a barrier to understanding, and she knew what was occurring on the battlefield.

She knew why the ships and soldiers pulled back.  She would not join them.

A single broad boulevard led to the Tri-Center complex, joined by narrower tributaries.  A horde of white-clad troopers pushed toward the front entrance—toward the once-transparent metal façade towering like a cliff wall, pockmarked and ash-smeared into opacity where particle bolts had left their mark.  Where the eternal gloom of Cerberon enveloped the streets, the interior atrium blazed with light, illuminating the trapped rebel soldiers who attempted to repel the invasion.

Perhaps they had a means to escape.  A way out of the complex.

She swept in low above the boulevard, flickering particle lances from the horde shattering against her shields.  Her vessel trembled as the electromagnetic field churned and coruscated.  She fired her cannons into the crowd, sending burning bodies flying into packs of survivors.  They were too many for her to miss, even as they scattered.

Perhaps her allies did not need Kairos to save them.  Perhaps she acted for her own sake.

She fumbled with her vessel’s controls through ungainly gloves, smelling the rotting odor of her twisted body trapped inside her mask.  She could not scent the smoke or charred corpses, though she could imagine both with perfect clarity.  She angled her ship ten degrees upward, exposing aft and underside to the continuing fire of the enemy and making for the complex.  She diverted all power from her forward deflectors and into her killing cannons–an act of technical wizardry that possessed no deeper meaning, no resonance in the true world, yet proved effective for her needs.

Cannons flashed.  The howl of torn metal resonated through her organs (somehow she could taste the tang of iron) and she entered the atrium through the newly created gap in the wall, shifting from thrusters to repulsors, turning ninety degrees, and floating ten meters above the startled New Republic soldiers.

Kairos had been at war with herself, her spirit sundered.  She’d often thought of leaving her people–leaving the defector, leaving Adan.  But she would not leave Adan.

Half-sheltered by the fragmented wall of the atrium, Kairos accepted the blow of an incoming rocket against her flank.  The vessel heaved and listed to one side; she saw on her console the damage to thrusters and repulsors, but she was still aloft.  She gently adjusted a lever and climbed out of her seat, retreating to the main cabin.  With the touch of a button, she opened the loading door and–stepping behind the turret gun–fired into the horde once again.

She understood that Adan and the defector sought to ensnare their foe in a trap–she’d comprehended those words well, after Adan had taken her aside and explained each step.  The butchers of Nacronis and Pandem Nai and so many other worlds did not deserve to escape justice.  Nor did the beast of Troithe who called himself governor–who unleashed monsters against his enemies–deserve to escape punishment.  So she had accepted the strategy of a man wiser than she, and agreed to the price in blood.

She raked the stream of the turret through the gap in the wall and across the boulevard, tearing apart stormtroopers and black-clad troops, their faces sweaty and screaming.  She could hear the battle clearly now, the shouts and the sizzle of bolts and the crackle of flames.  As her foes returned fire and the deck began to shake, she thought that the horde seemed smaller.

Since their time on Troithe had begun, she had slaughtered and allowed noble warriors to be slaughtered.  In her commitment to vengeance, to the scouring of her foes, she had accepted the sacrifice of the soldiers she was expected to preserve.  She had agreed to the price.  She would not, could not turn away now.

The deck jumped once to warn her that the ship was failing.  She leapt from the turret to seize the crew seats as repulsors died and the U-wing dropped to the atrium floor.  She heard only a cacophonous roar and saw nothing–her vision was obliterated by the stresses of gravity and bulkheads–and when sight returned her body was suffused with pain.  Motion was rewarded with surges of agony.  But she had suffered worse, and she scaled the wreckage of the askew cabin to retrieve her weapon.

She didn’t know what had become of the New Republic soldiers.  She lodged her bowcaster against her shoulder and gurgled instead of screamed as it kicked back against her with every shot fired.  The crash of the U-wing had left the atrium thick with smoke and flame, and the clouds glowed like the clouds of Pandem Nai, exquisitely scarlet, as they soaked the colors of particle bolts streaming toward her.

She felt air against her skin.  Her forearm wrappings were scorched.  She had broken her last vow.

She fired into the smoke.  She fired at the stormtroopers who hurled themselves toward her, piled body upon body–few in the grand tale of it all, few compared to those she’d killed in the past and those soldiers she’d failed to save–and kept on firing until she could no longer feel, could no longer stand.  She heard cannon fire outside the complex but she could not raise her head to see.

She heard the calls of rebel soldiers still alive.

The last thing Kairos saw was the beautiful face of Yrica Quell–the defector, the traitor–looking down at her.