What You Can Buy in STAR WARS: Galaxy's Edge - Nerdist

What You Can Buy in STAR WARS: Galaxy’s Edge

Star Wars: Galaxy’s Edge is designed to make you feel like you’re on Batuu. You’ve wandered into daily life in Black Spire Outpost, a location within the Star Wars universe. That means consideration on every level of storytelling from attractions, to food, to merchandise—it all has to be in-universe. It means you’re not going to see a product with a giant Star Wars logo emblazoned on the front or exit an attraction into a gift shop. Instead, you can buy “handmade” items from a Toydarian toymaker, purchase Jedi and Sith artifacts from an Ithorian collector, build your own droid or lightsaber, or maybe even adopt a creature from merchant stalls along the winding village streets. Nerdist was part of a small group of media that previewed what Galaxy’s Edge has to offer, including all the merchandise you’re going to want to start saving credits for now—no pulling a Jedi mind trick on any of the shopkeepers. Here are all the details (note: no prices yet) we have on the shops and their proprietors so far:

Dok-Ondar, referenced by Qi’ra in Solo: A Star Wars Story, has quite the place for his vast collection on Batuu. He’s a key figure in the galaxy’s black market and runs Dok-Ondar’s Den of Antiquities; it’s filled with items the Ithorian has acquired over the years—items such as a 12 foot tall taxidermied wampa. His collection is changing regularly. An animatronic Dok-Ondar, who, by the way, is 245-years-old, presides over the shop, going about his day and never repeating the same actions thanks to carefully programmed animations pegged to two moods: happy or frustrated. He can interact with cast members in his native Ithorian tongue. 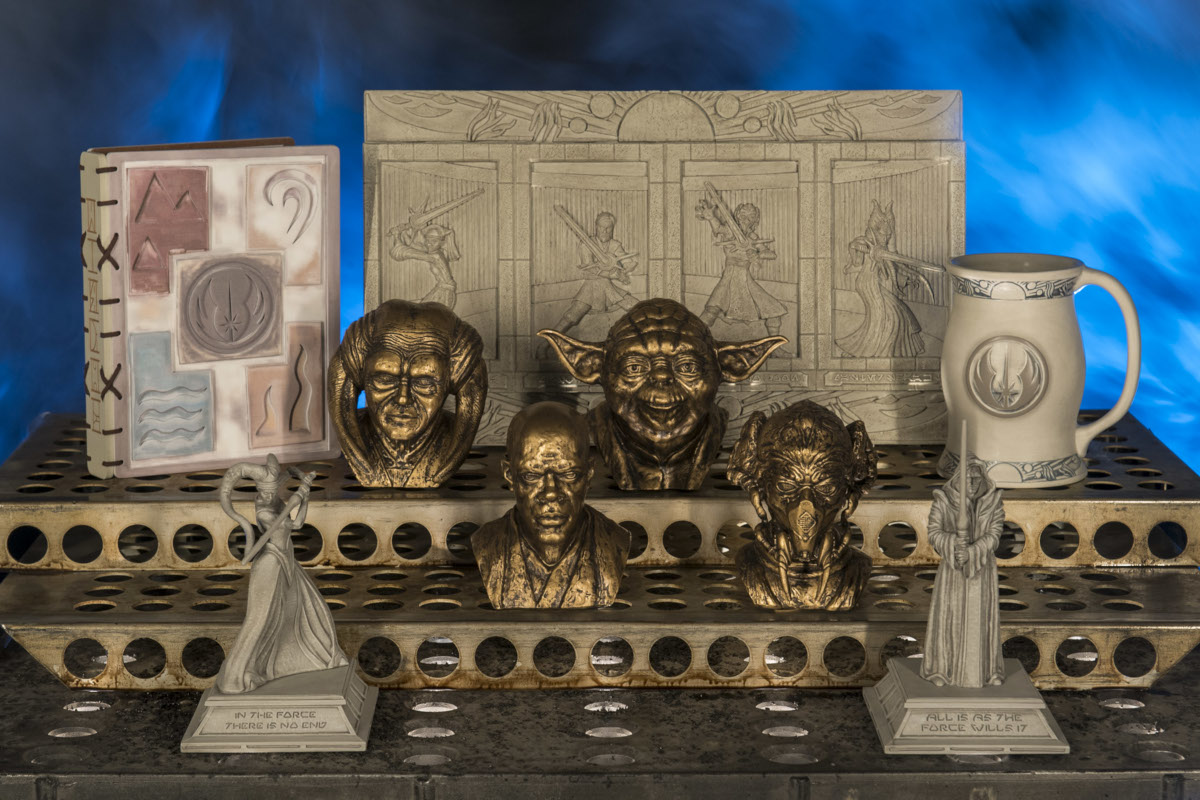 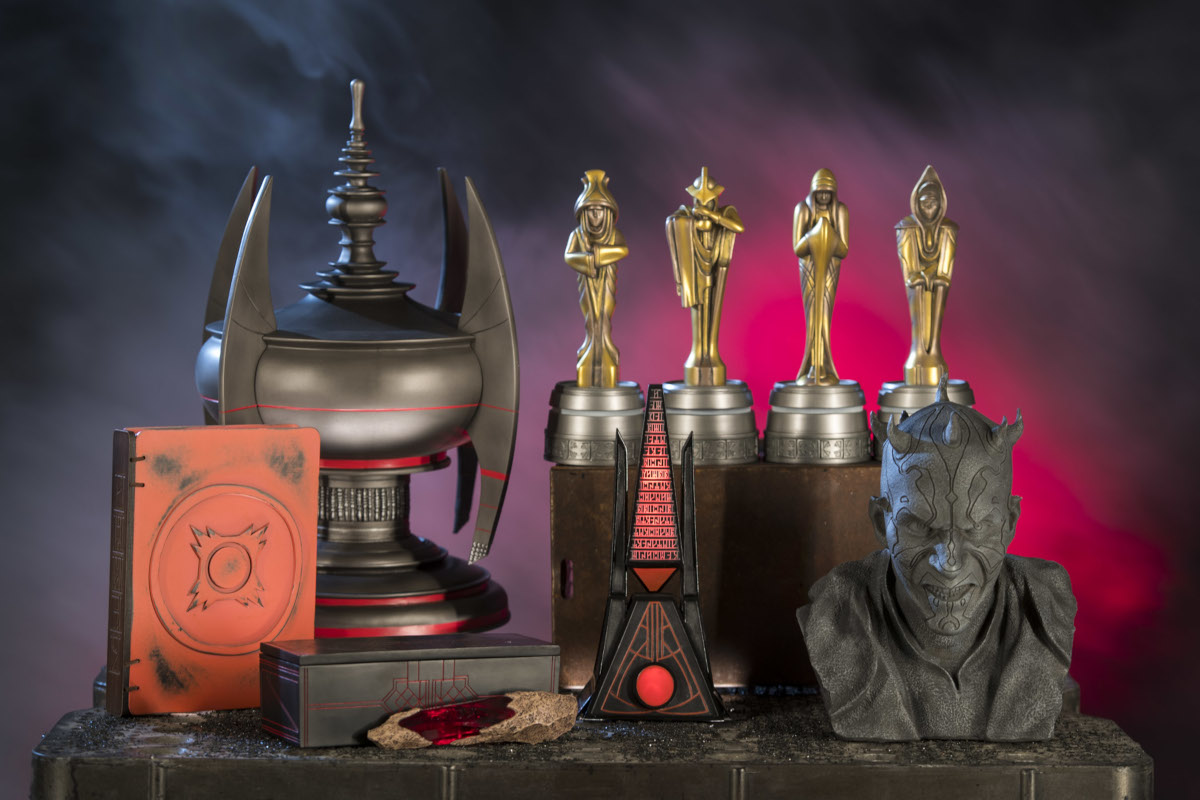 Besides being a prime place to look for easter eggs from across Star Wars films, animated series, and published materials, the Den of Antiquities is the place to shop for Jedi and Sith artifacts. Maybe you want replicas of the statues in Palpatine’s office, a bust of Mace Windu, or even a fancy boxed legacy lightsaber that Dok-Ondar has found somewhere in the galaxy. You can buy the hilt alone or buy a separate blade; the blade will know what color it should be based on which hilt you pair it with. Dok-Ondar even sells display stands for your lightsaber and belt hooks for the hilts. 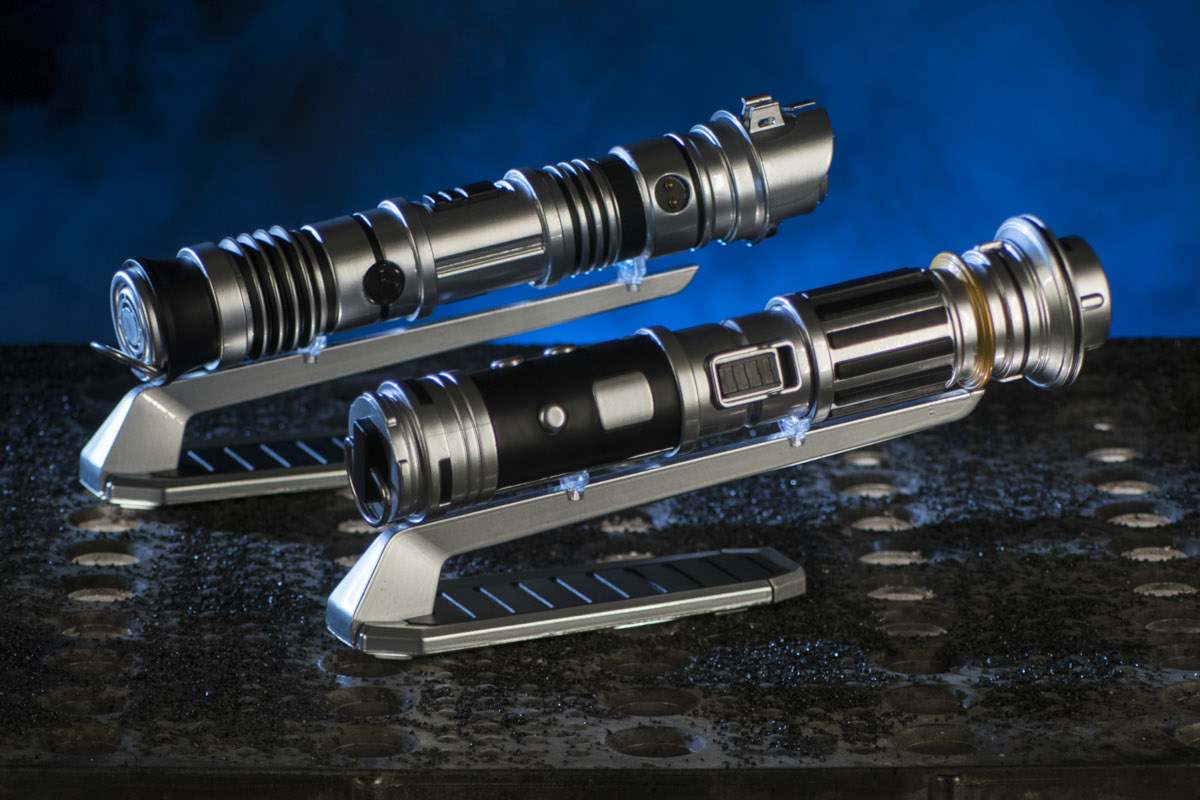 Finally, you can discover Jedi and Sith Holocrons in the shop. The Holocrons communicate quotes and information from the galaxy, and if you pop in a kyber crystal (which you can also purchase), you can unlock additional content from the devices. 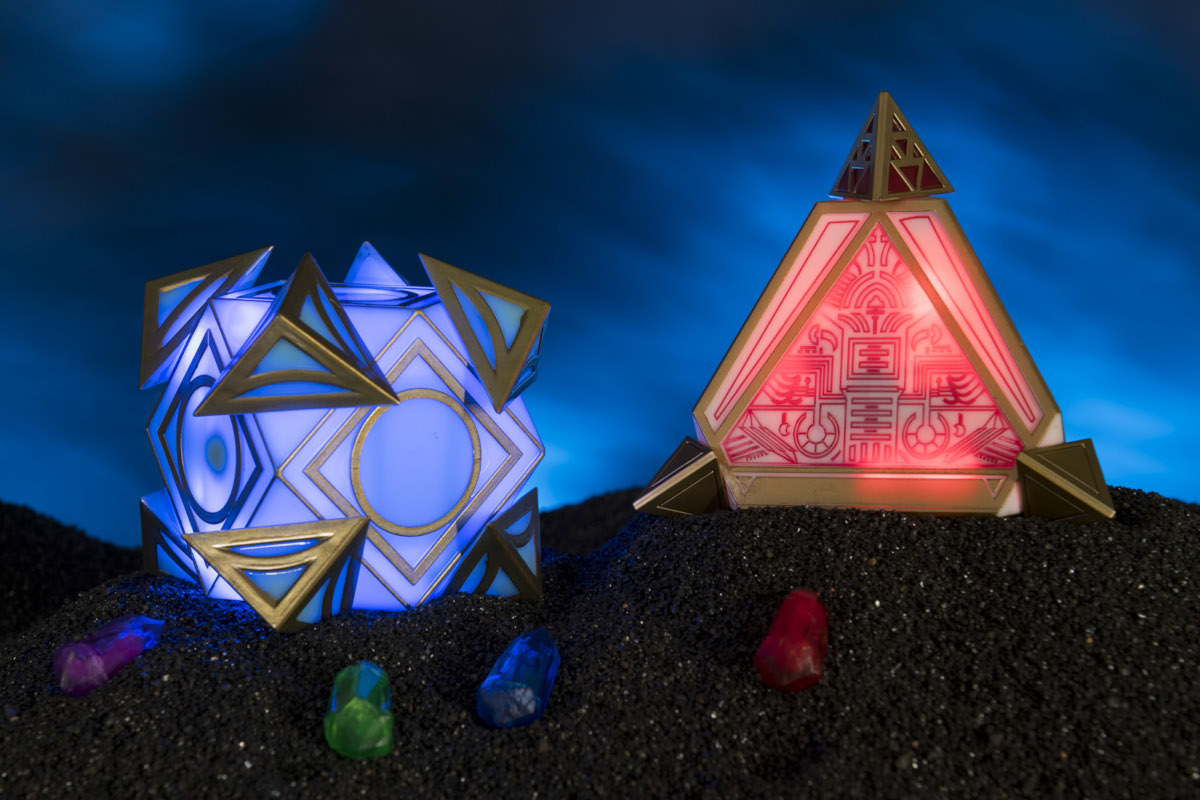 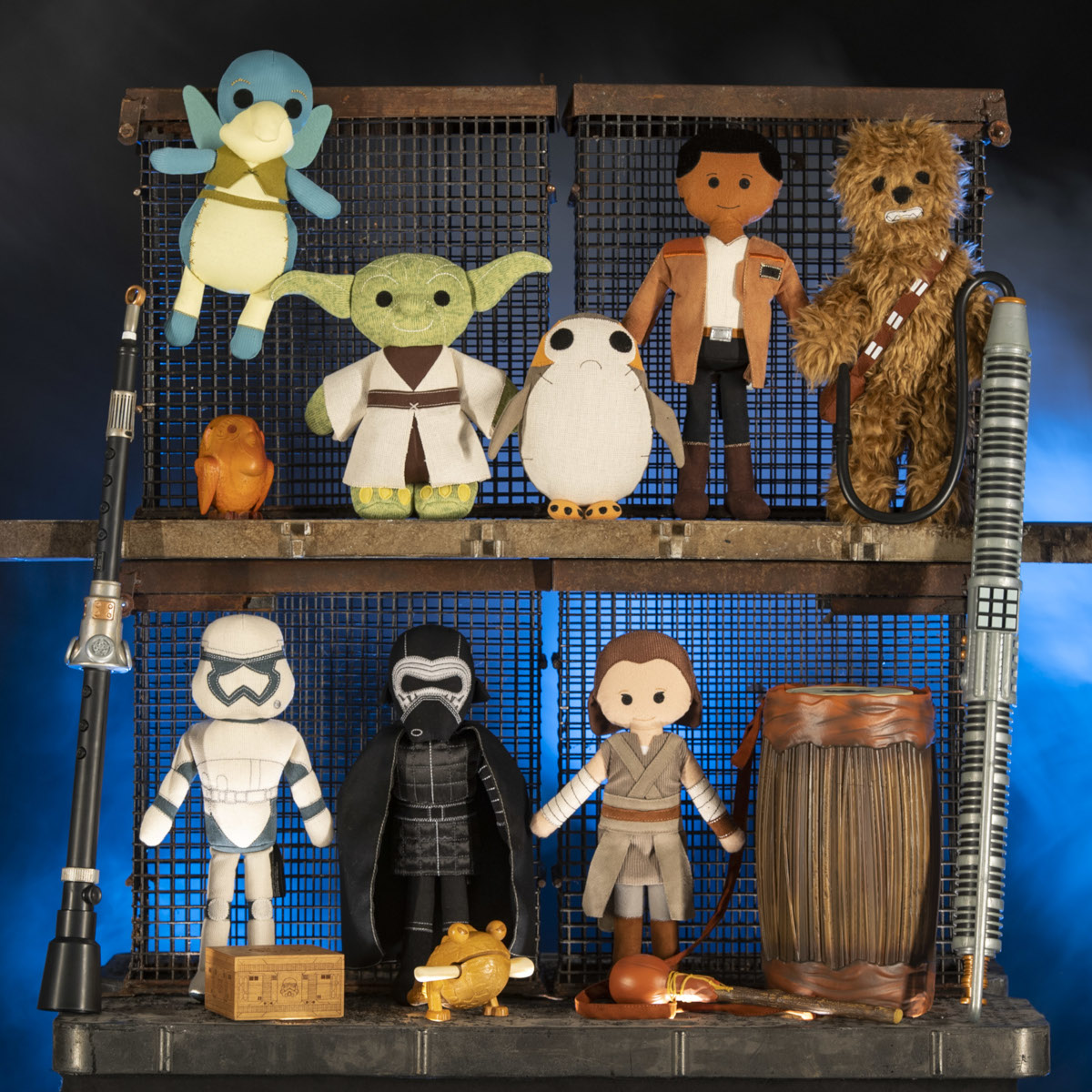 Nestled within the marketplace, you’ll find the Toydarian Toymaker. The owner of the stall, Zabaka, has heard stories about heroes and characters from around the galaxy and has made plush toys like the ones you see in the above image. And yes, that is Watto from The Phantom Menace. In addition to plush toys and carvings (please note the convor in the photo), Zabaka sells musical instruments such as an Ewok drum and kloo horn, the latter being an instrument used by Figrin D’an and the Modal Nodes in the Mos Eisley Cantina. You can play the instrument yourself or press a button to play pre-programmed music. You can play “Cantina Band” and annoy or delight everyone around you! It’s not pictured, but the Toymaker will sell portable fans that look like moisture vaporators. 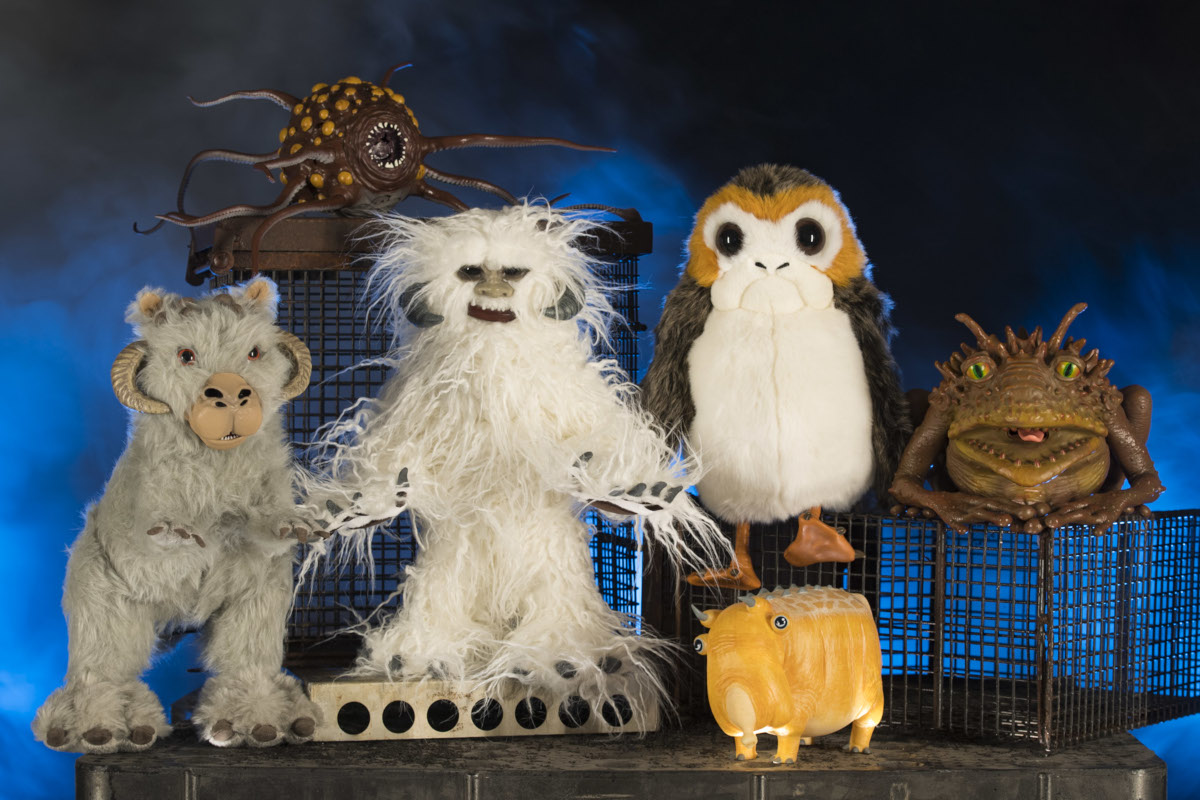 Anyone who wants to take home a creature from the Star Wars universe can do so at the Creature Stall. Owned by an Amani named Bina, this marketplace stall seems practically alive with animatronic critters (she won’t be present as she’s out collecting exotic creatures for her shop). One cage has a moving worrt, another cage holds something softer and more cuddly. You can purchase small versions puffer pigs (!), rathtars, tauntauns, porgs, and more. All of the creatures we saw (everything in the above photo) has a special movement/and or sound feature. 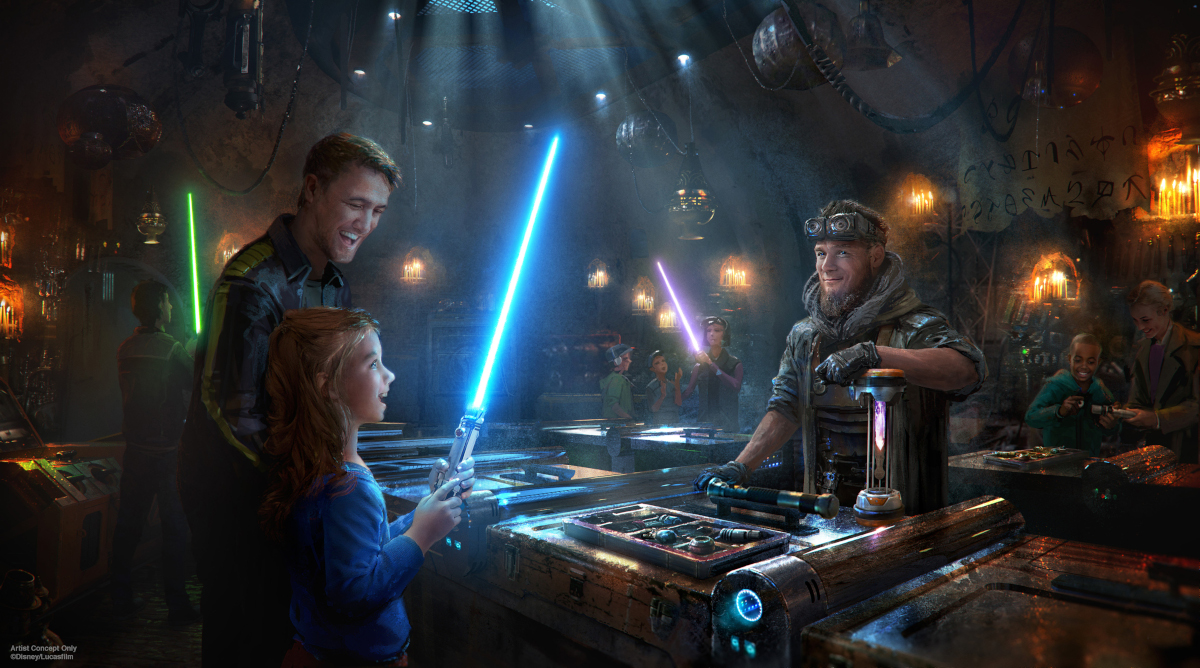 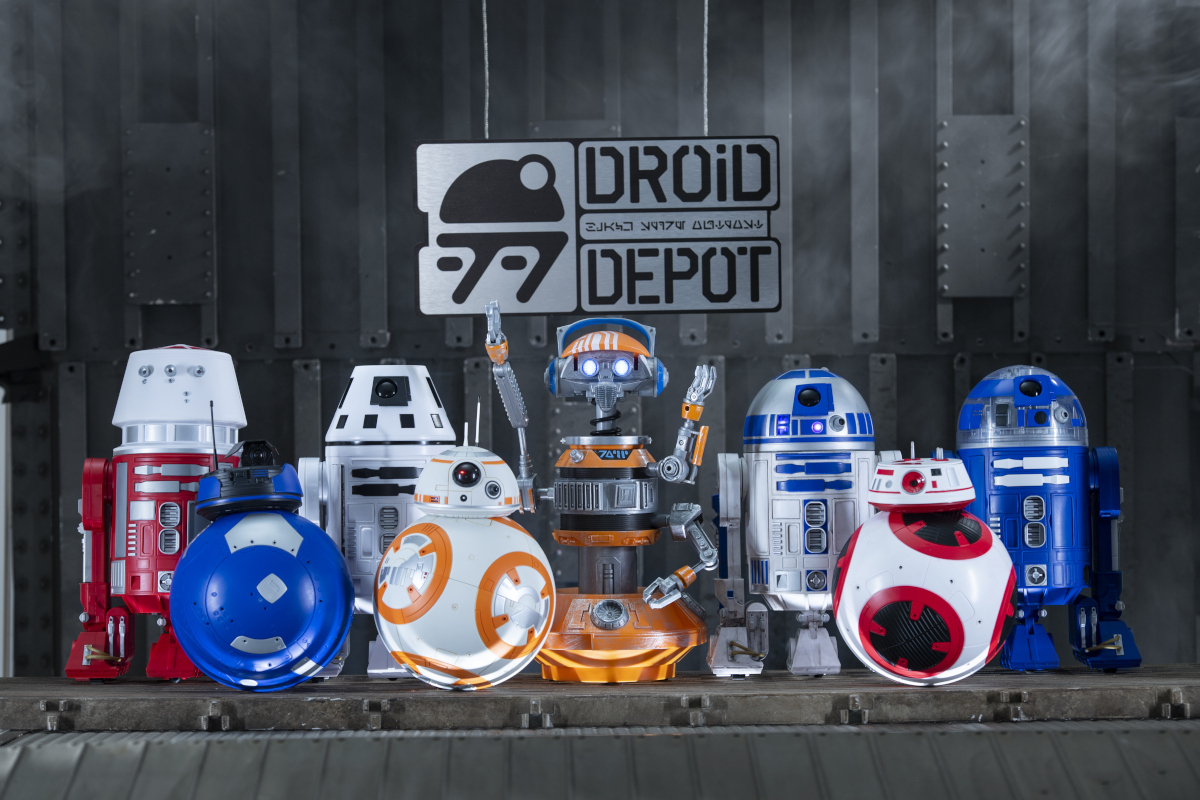 Lightsabers aren’t the only thing you can build in Galaxy’s Edge. You can build your very own droid! Mubo, an Utai, owns the Droid Depot; he’s very tech-savvy and likes to build and share his knowledge. He won’t be present in the shop, but he has left you in the capable hands of his team. You’ll choose brand new droid parts from a conveyor belt, take them to a build station, follow instructions to assemble your highly customized R-series or BB-series droid (they’re approximately 12 inches tall), and then place it in the activation station. Once your droid is activated, it will light up and make sounds. You can operate it via a remote control around Black Spire Outpost. Your droid can interact with other droids and all around the village. Droid Depot has ready to buy options, too. They have a C-3PO toy that interacts with your actions (if you take his head off, Threepio will have something to say about it) and BB-8 and R2-D2 at the same scale as the customizable astromechs. You can pick up droid keychains. And maybe coolest of all, a RX-24 is available. Now known as DJ R-3X, he operates with a remote, he plays some Star Tours audio, and he connects to your smart device to play classics like “Jedi Rocks.” Oh, and he has DJ sound effects like the classic airhorn. 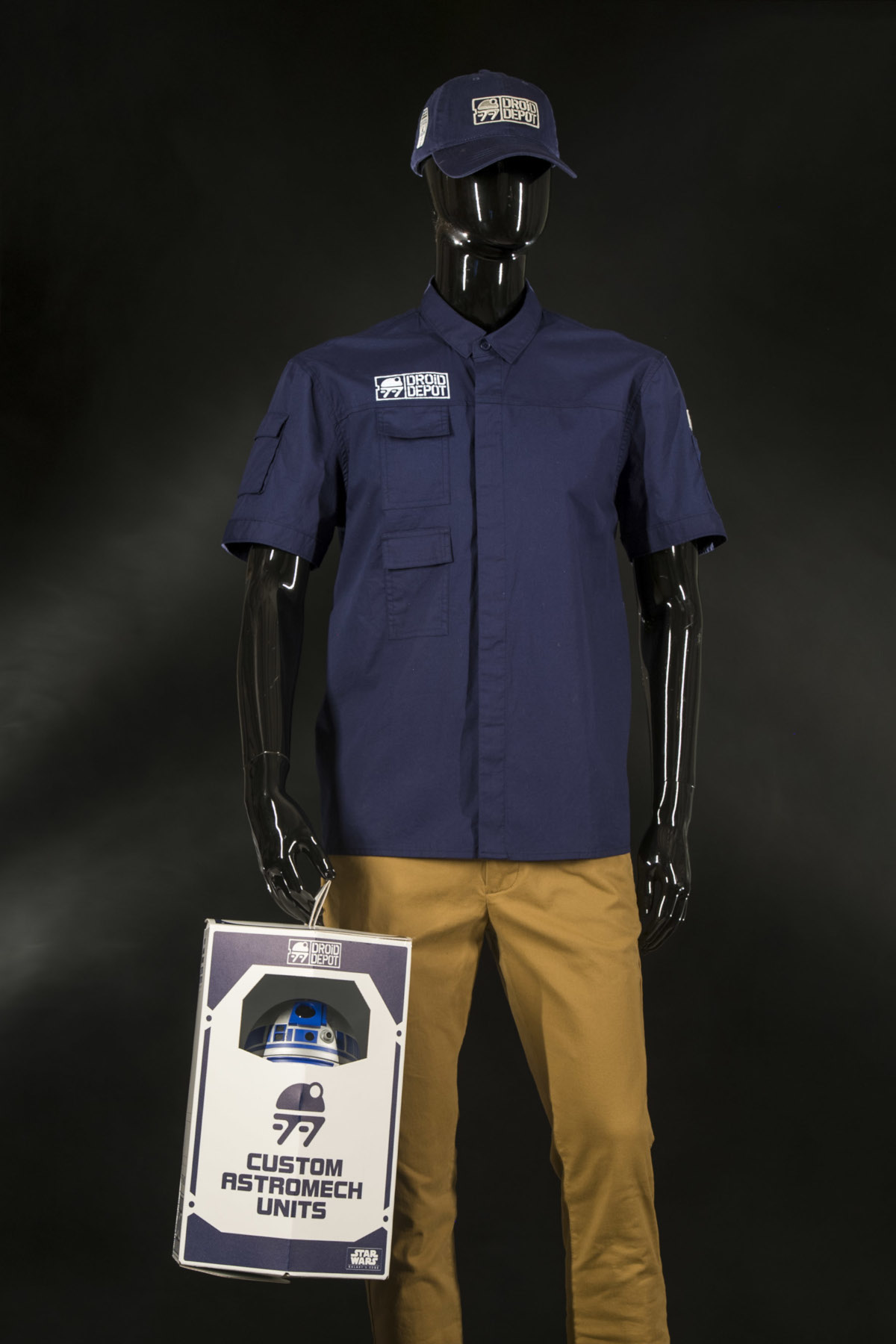 Please take note of the packaging for your custom astromech units in the above image. Galaxy’s Edge products will have in-universe packaging as much as possible with limited point of sale footprints. The First Order will have nicer, more structured packaging, while the rest of Black Spire has more resourceful, there out of necessity packaging. They’ll be offering reusable bags for sale and will minimize using the usual Disneyland plastic bags. How will these droids operate in a busy theme park? Disney has play-tested various scenarios with crowds. Guests likely won’t want to wreck something they’ve put time and money into creating. We’ll see. 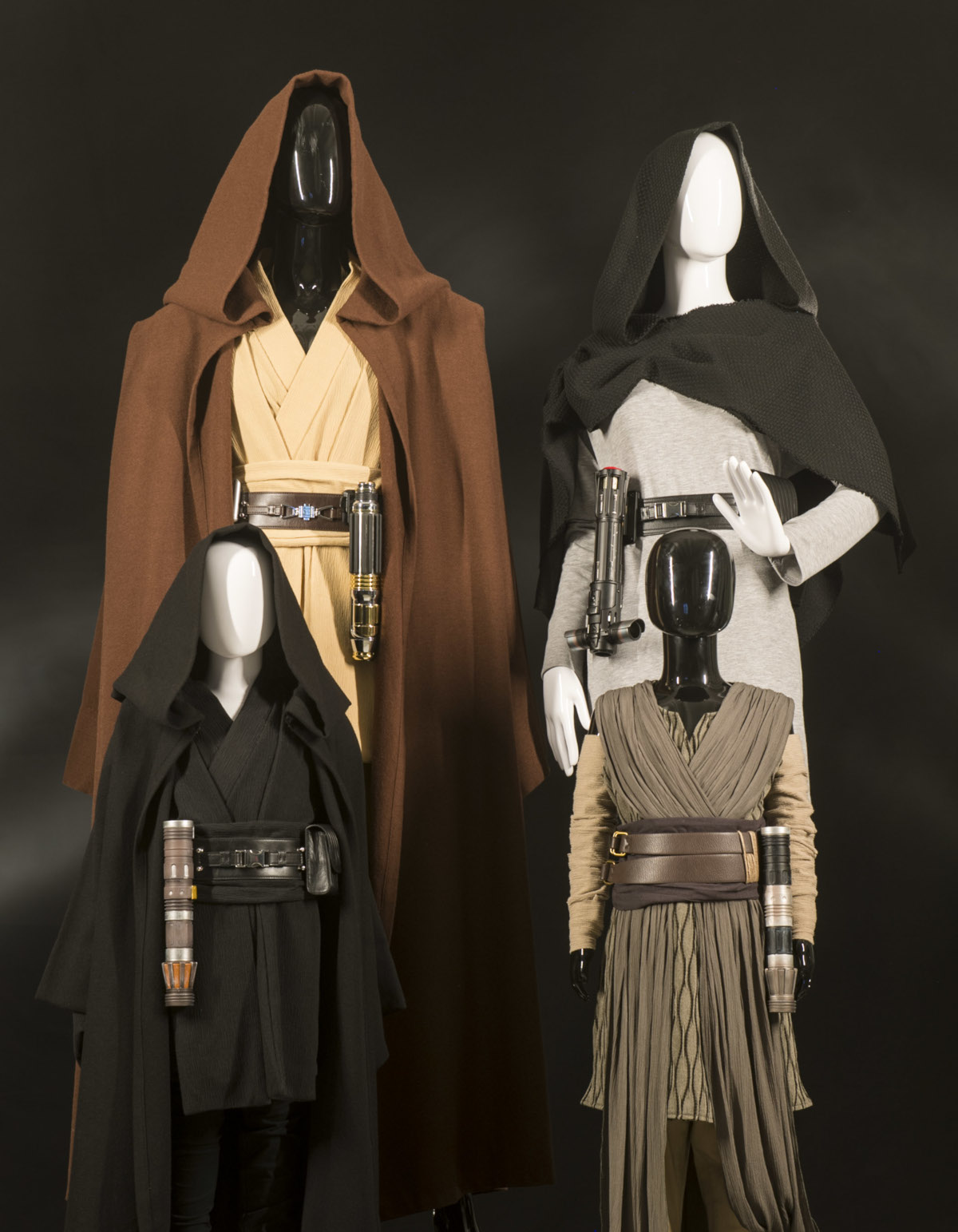 Black Spire Outfitters is the place to shop for galactic styling for the entire family. This photo boasts Jedi ensembles and separates so visitors can mix and match. Disney displayed a replica of Princess Leia’s white dress from A New Hope at the media preview. 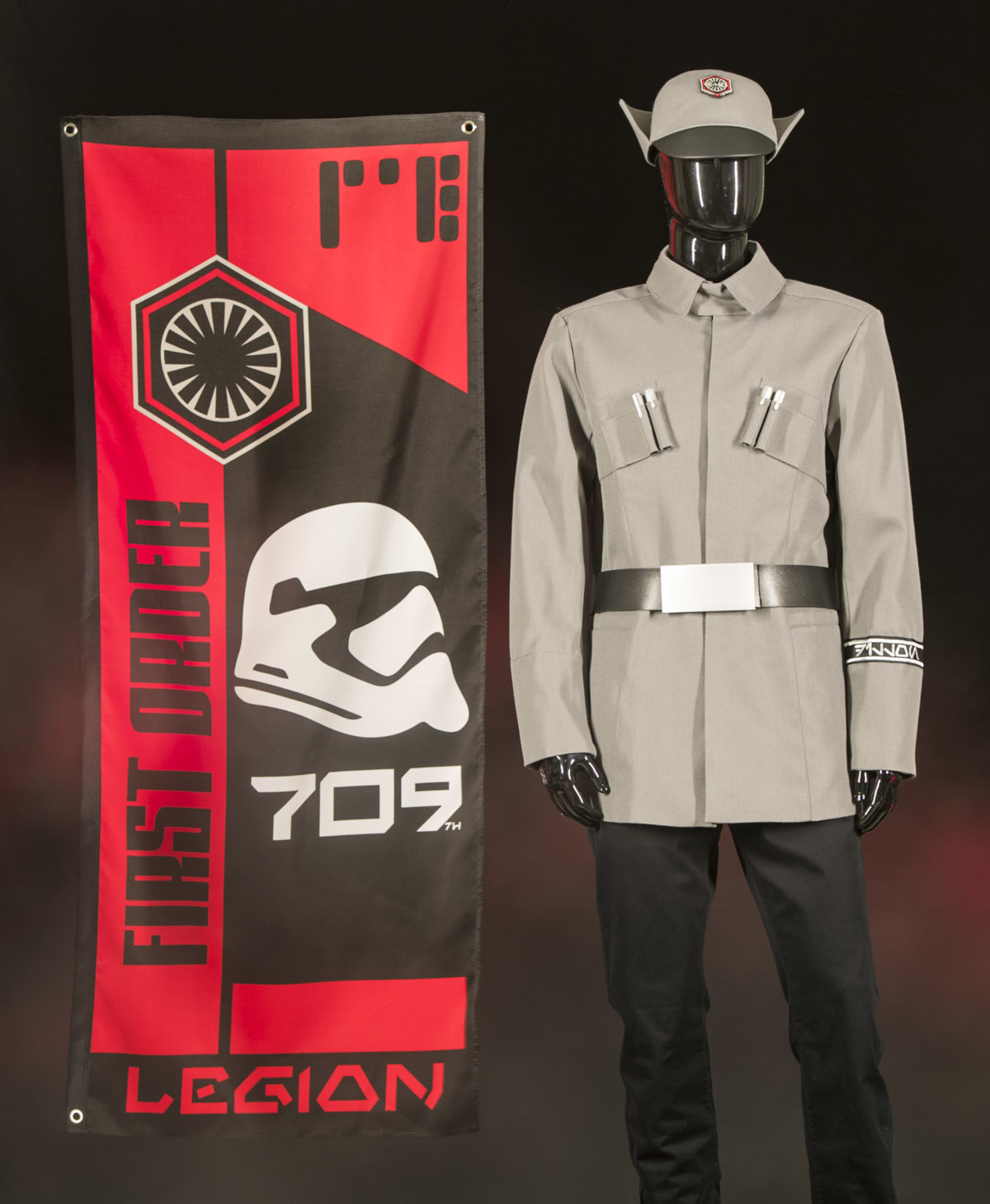 The First Order has recently arrived on Batuu, specifically the 709th Legion, a.k.a. Red Fury, and some people are happy about it. Those who support the First Order can shop at First Order Cargo, near the TIE echelon (a brand new ship!), for badges, flags, and wearables aligned with that faction. 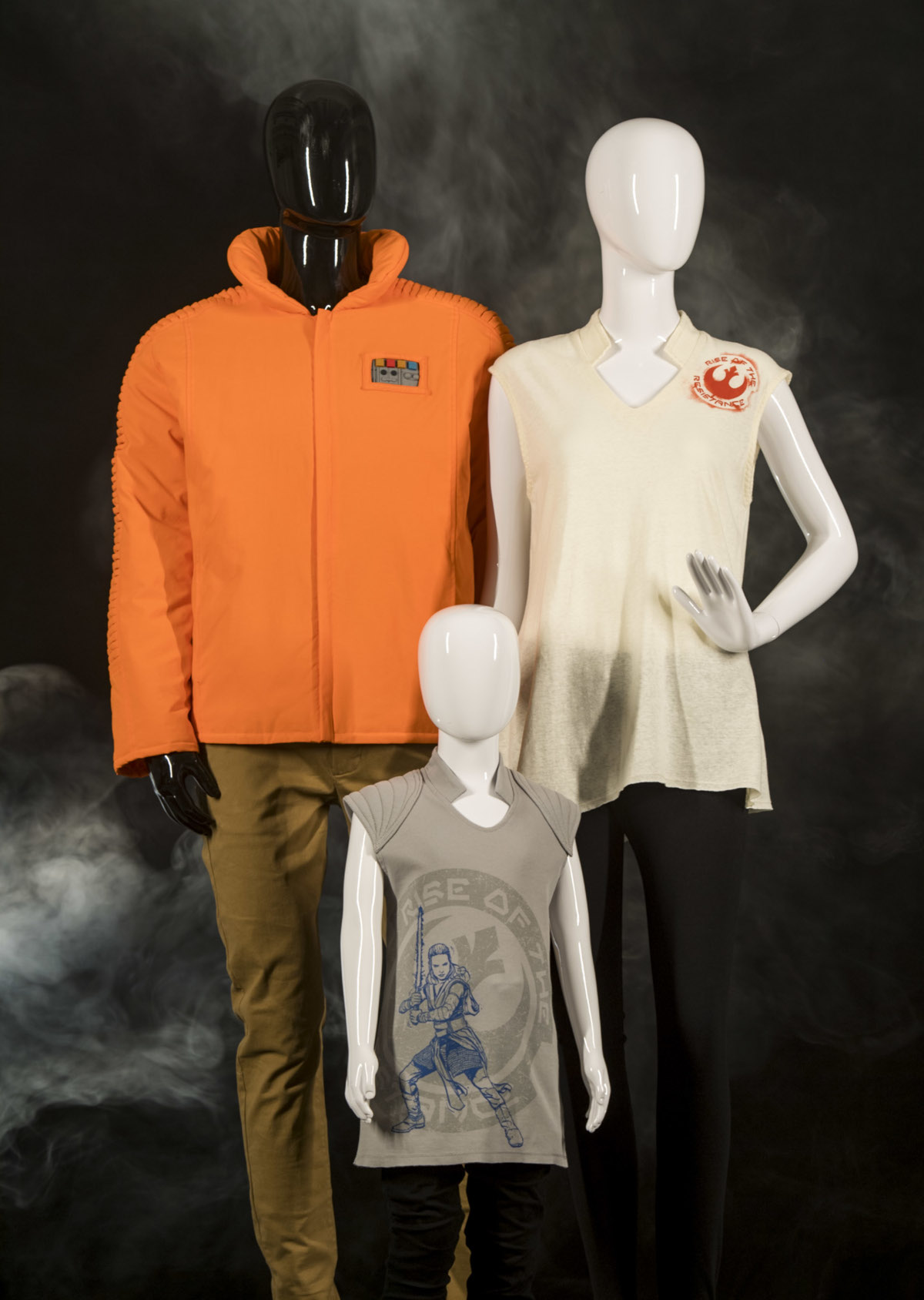 Guests sympathetic to the Resistance can go to Resistance Supply, a makeshift shop near Resistance command, to find merchandise emblazoned with the organization’s iconic starbird symbol. You’ll also find apparel such as an orange jacket made from a design right out of the Lucasfilm archives. You’ll notice that a few of these offerings look like costume pieces. Disney Parks currently have regulations about costumes for adults; they are still finalizing how that will be handled for Galaxy’s Edge.