Things to Know Before You Visit STAR WARS: Galactic Starcruiser

Star Wars: Galactic Starcruiser is not a chill vacation. If you want to relax, I recommend spending your money on another experience. To get the most bang for your buck, do as much as you can starting as early as you can. And I know people always say to pack comfortable shoes, but it applies here. Even the shoes you plan on wearing for dinner. You’ll stand a lot for various experiences and for viewing activities in the atrium, and you never know when you might need to execute a mission in the engineering room. Save your feet.

Talk to Everyone, Especially the First Afternoon

After you stop by your cabin, get out to the atrium and talk to characters and crew members. You can snag a beverage from the adjacent Sublight Lounge if you want, but I wouldn’t settle in at a table just yet. You can start a lot of storylines by talking to characters and crew members on the first afternoon and evening. I didn’t take advantage of this as much as I should have, and I feel like I missed out.

Definitely feel free to join any groups of people already talking to characters. And characters run in a million different directions, so I recommend being persistent if you’re trying to chat with someone in particular.

Ship tours depart from the atrium frequently on the first afternoon. The tour doesn’t take long and crew members will show you around the public spaces. Additionally, your guide will share the history of the Halcyon. One notable bit of history on the tour comes into play in one of the storylines. If you love fun facts, the tour is for you.

Touch All the Buttons

If, like me, you like to follow rules, shake some of that off while aboard. Push buttons, try doors. See what you can access on the console panels throughout the ship. Know that you don’t have to wait for a character to guide you to do something.

The ship’s muster happens late afternoon on the first day, just like on a cruise ship. Here, though, you assign yourself to a station: A, B, C, or D. These stations do come back into play at a later point, but it in no way matters which one you choose. The muster stations closest to the bridge (C and D) have the best viewing area for that later activity. But just know you don’t have to return to the muster station you chose at the beginning. No one’s doing a roll call. Return to where you have the best place to see all the action.

On cruise ships, I always pick the second dinner seating. I did for Star Wars: Galactic Starcruiser too. I prefer eating later. But here, I’d say pick the early dinner seating (it’s at 5:30 p.m. as opposed to 8:00 p.m.). The final celebration on the ship starts at 9:20 p.m., when many guests in the second dinner seating were just wrapping up paying bills for drinks or in my case, picking at their desserts. The cue to head to the atrium sounded and while we tried to get upstairs quickly, the atrium felt pretty full already and it’s not easy to move around that space when it’s crowded. As a result, I had a lousy view of the celebration and big events.

If you have the early dinner seating, your story may put you in the perfect spot when the time comes. But if not, at the very least you have time to arrive a little early and snag a spot.

Keep Using Your Datapad on Batuu

The datapad plays a key role for your entire time on the ship. Seriously, bring battery packs for your phones. But aside from the missions you’ll do for various characters while on Batuu (a.k.a. Star Wars: Galaxy’s Edge), keep doing your usual activities. Scan crates, hack panels… you don’t know what will connect to the Halcyon. One person I know scanned a crate near Savi’s and it had some pretty interesting results.

Remember when I talked about this experience being go, go, go? Planning breaks feels challenging because of it. Even when I took 30-45 minutes to step away to change for dinner, I felt like I missed cool moments and activities. I know I for sure missed a very cool thing on night two while I slowly got ready for dinner. It’s important to take breaks if you need them, but be aware things will continue happening and you may miss out. The schedule just overflows, and that doesn’t account for the spontaneous activities around the ship.

The most chill time might be the morning or early afternoon of the Batuu excursion.

Interact with D3-O9 in Your Cabin 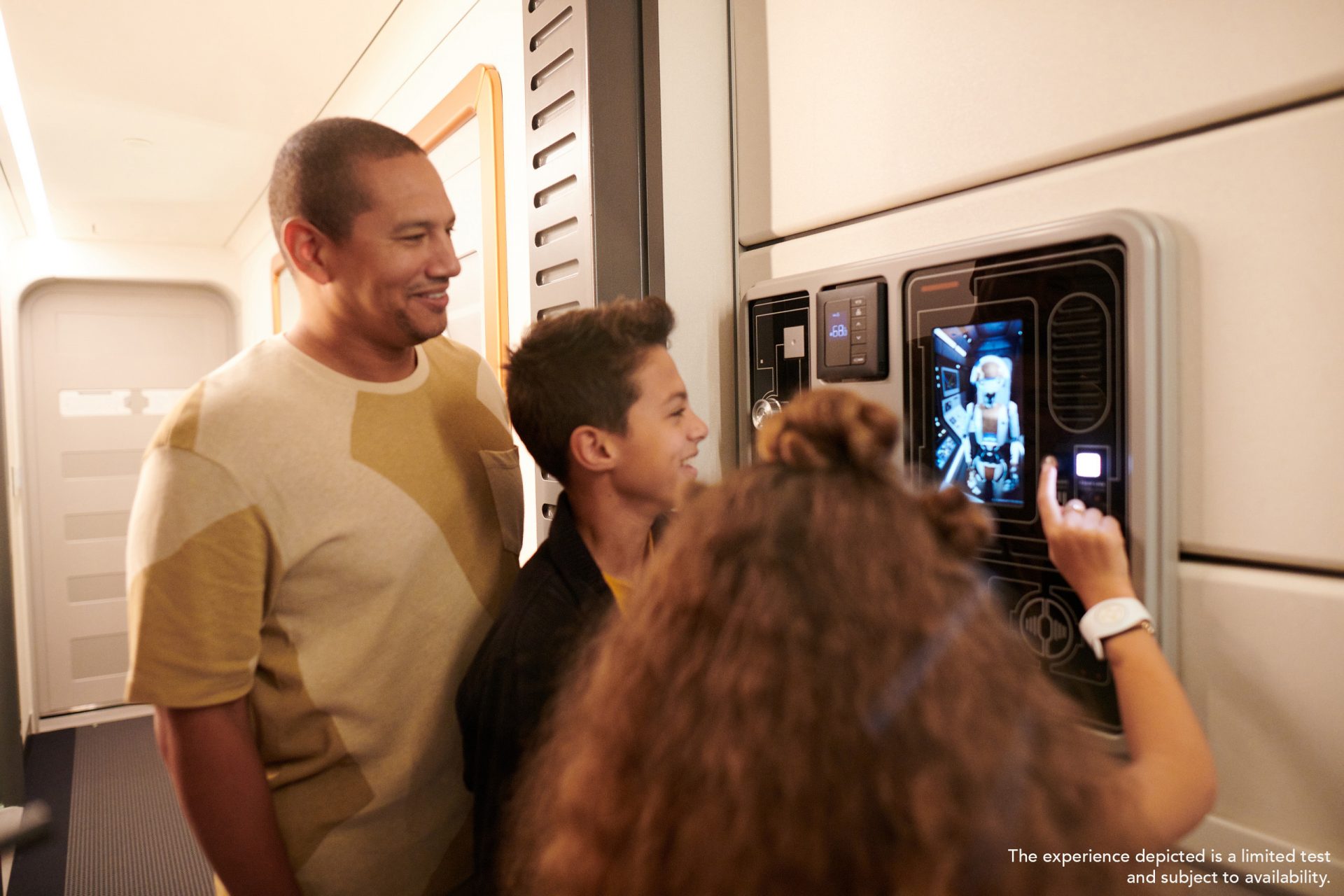 Your cabin has a link to D3-O9, the ship’s logistics droid. If you see the light on the panel blinking, make sure everyone in your cabin who wants to hear what D3-O9 has to say is present, and press it. She’ll have information for you or maybe a bedtime story. Your interactions with D3-O9 don’t directly impact any storylines going on as far as I can tell, but talking to her is fun.

Also, make sure you have luggage space and material to wrap those glass items and keep them safe. Glassware sold in the gift shop gets wrapped only with tissue paper, so it’s a consideration for those too. They will ship items to your home, but it’s pricey.

If you want to take photos of your outfits, your crew, or just the spaces aboard the ship without people in the background, it’s easy to do. Hallways between the cabins provide an excellent backdrop. But if you want a photo in one of the ship’s grander public spaces, stop by for snaps on the morning of the Batuu excursion. We found the atrium and lounge almost empty except for crew members at that time. Same if you’re up late.

Got a birthday or anniversary? Definitely let crew members in the Sublight Lounge know. Or, conversely, if you’d rather not have all eyes on you, make sure someone in your party doesn’t give you away.

When you take the transport back to Earth and leave the Halcyon, you’ll have one more chance to shop. A small gift shop pops up by the terminal where you checked in. This shop offers merchandise branded with Star Wars: Galactic Starcruiser. So don’t stuff your luggage with Tetris-like precision before you leave in case you want to make a few more purchases.