This Old Minivan is Transformed Into a STAR TREK Shuttlecraft - Nerdist

This Old Minivan is Transformed Into a STAR TREK Shuttlecraft

The Enterprise shuttlecraft has been an important part of Star Trek iconography since the original series aired way back in 1966. But it was Star Trek: The Next Generation which introduced a wider variety of shuttle pod types, and really made them feel like an essential part of any Federation starship in every iteration of the franchise going forward.  And now, thanks to the folks over at Geeks Are Sexy, we’ve learned about one hardcore Trekker who took his love of Starfleet shuttlecrafts to a whole new level.

Cory Mervis-Bocskor is a Star Trek fan and a Burning Man enthusiast. He wanted to hit the annual festival in proper Federation fashion a few years back. It was his hope to represent Star Trek fandom in true style. So he took an old Ford Aerostar minivan and transformed it into the Federation Type 6 shuttlecraft the Goddard. The Goddard appeared in a handful of episodes of Star Trek: The Next Generation during the show’s fifth and sixth seasons.

Sadly, this incredible recreation of the Enterprise shuttle was not actually street legal, despite all of the best efforts of her maker. So to take it to Burning Man, they had to use a trailer to bring it there. A few attached lights later however, and the shuttlecraft Goddard was ready for warp speed, as you can see in the video above. A Redditor by the name of Kalvious spotted it randomly in his home town recently and posted the images. Seems it’s still in flying shape, despite its place at a junkyard.

The Goddard has quite a but if history on TNG. It was the Enterprise D’s  shuttle number 15, replacing the shuttlecraft Magellan lost in the episode “The Outcast”. The Goddard first popped up in the fifth season episode “The Next Phase”. In that episode, Worf and Data flew the Goddard to a damaged Romulan ship. In that incident, Geordi  and Ensign Ro were accidentally phased out of reality and believed to be dead. 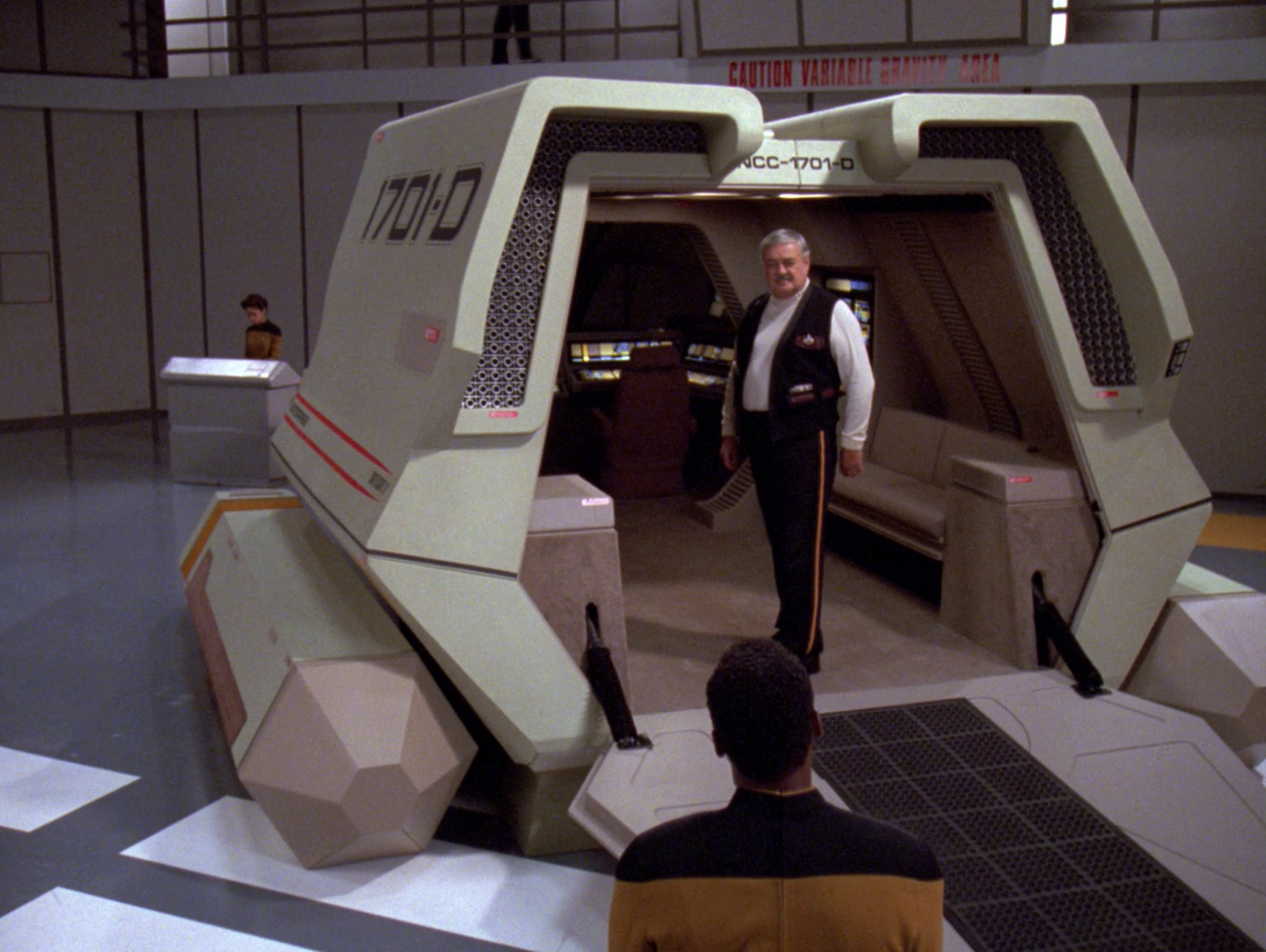 The next time we saw the Goddard was in season six’s “Relics”. In that episode, the Enterprise crew discovers the original series’ Chief Engineer Montgomery Scott (James Doohan) trapped in a transporter loop for 75 years. At the end of the episode, Captain Picard gifts Scotty with the Goddard so he can roam the quadrant and enjoy his retirement at last. Which is kind of weird when you think about it. The shuttle is Starfleet property and not Picard’s own personal ship. But we but all those Starfleet Admirals looked the other way on this one. It was for THE  Scotty after all.

Originally, Gene Roddenberry created the transporters so the budget conscious series could avoid building expensive new sets like shuttles. Not to mention saving on crucial storytelling time; no need for manning a ship flying it to every planet’s surface. Nevertheless, a shuttlecraft was eventually introduced halfway through the first season of the original series. It first appeared in the episode “The Galileo Seven” and it’s been a Star Trek staple ever since.