Who STAR TREK's Data Was, and Where He Is Now - Nerdist

Who STAR TREK’s Data Was, and Where He Is Now

One of the huge surprises in the recent trailer for Star Trek: Picard was the revelation that actor Brent Spiner would be back as Lt. Commander Data. It’s a big reveal for two reasons. For starters, Data was actually killed off at the end of the last Next Generation feature film, Star Trek: Nemesis. Second, actor Brent Spiner is now 70 years old, a far cry from the eternally youthful android. But thanks to digital de-aging and makeup effects, Data will be gracing the small screen once more. Here we’ll explore not only Data’s past and significance in the Trek-verse, but just how he will find his way back into the story. 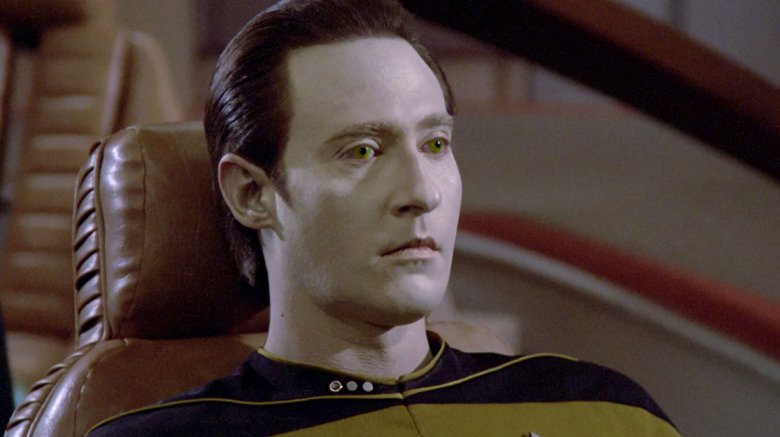 When we first meet Data in the TNG pilot “Encounter at Farpoint,” he is a completely emotionless and a very calm, measured being. We learn quickly in the first season that he is the only known sentient android in existence, and that he was built some 28 years prior on the colony world of Omicron Theta. His creator was Dr. Noonian Soong, a brilliant cyberneticist who was looking to construct a positronic brain. When he failed utterly, he went to the distant colony world to start again in secret. Data was the ultimate result. Later, Data would describe himself as “the culmination of one man’s dream.” 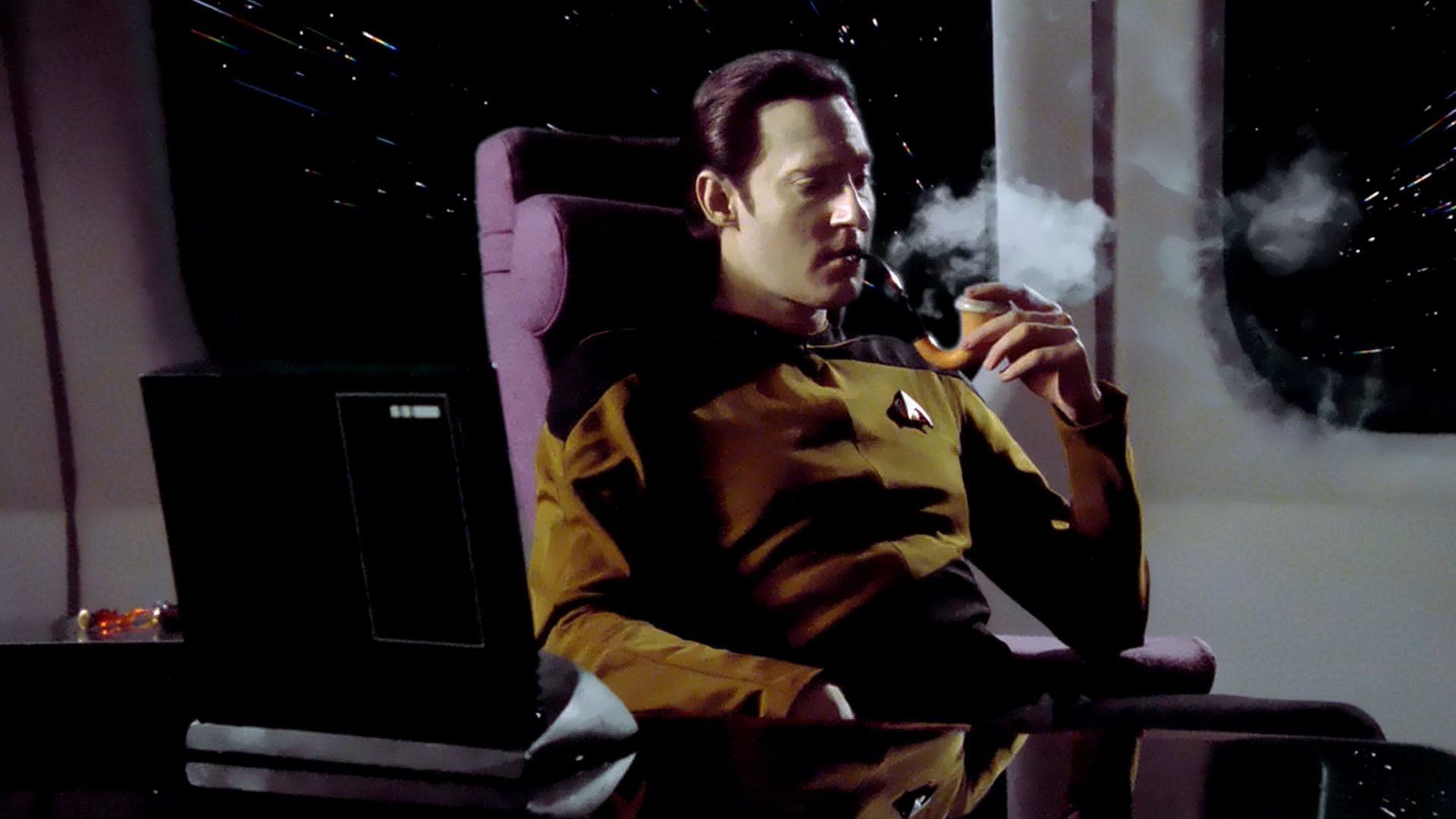 In his isolation, Soong constructed several early prototypes of Data. The first was B-4, who lacked critical cognizance skills and was quickly disassembled. The next attempt was Lore, who was far more successful. But Lore lacked empathy, and harbored a sadistic malevolence. He lured a spacefaring crystalline entity to the colony, where it eventually consumed almost all biological life there. For this, Lore was disassembled and placed in storage. Dr. Soong finally created Data, this time making sure to remove all emotional considerations from his programming. This would ensure that another android like Lore would never happen again. After the colony was destroyed, Data was deactivated. When Starfleet officers discovered him and reactivated him, he considered that his true “birth.” 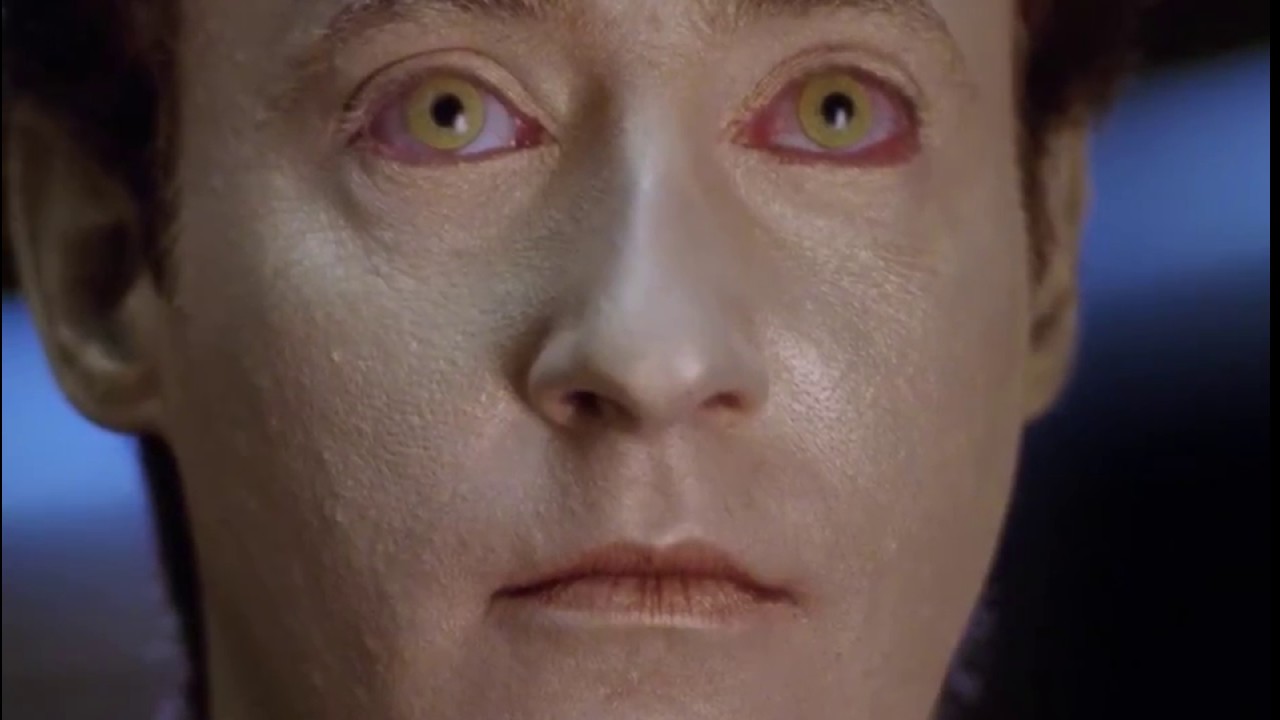 Data’s positronic brain made him more intelligent than any other known living creature. He spoke of being constructed with an ultimate storage capacity of approximately 100,000 terabytes, along with a total linear computational speed rated at 60 trillion operations per second. But despite this, his lack of emotions made adjusting to life extremely awkward for him, and he made very few friends. His intellect made him an ideal candidate for Starfleet Academy, but Dr. Bruce Maddox opposed his entry into the Academy on the grounds that he was not a sentient being. His opposition was overruled, and Data became on one of Starfleet’s finest officers. 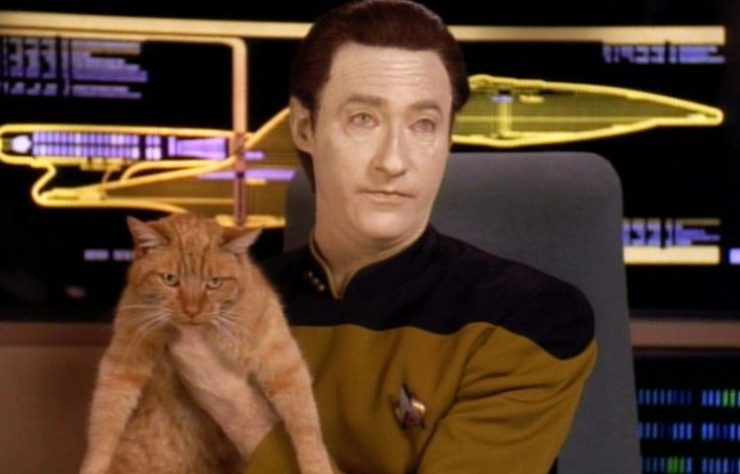 After nearly two decades in Starfleet, Data rose to the rank of Lt. Commander, and became the second officer on board the Enterprise-D. Captain Jean-Luc Picard became more than just a commanding officer to Data, and evolved into a sort of father figure. During their time serving together, Captain Picard taught as much to Data as he could about what it meant to be human. When Data’s rights as a sentient being were called into question, he even defended him in court and won. And when Data created his own android daughter Lal (who tragically later perished), Picard made sure she would not become the property of the state.

During his time on the Enterprise, Data also became close friends with Chief Engineer Geordi La Forge, who would also serve as a sort of guide into humanity for him. He experimented with a romantic relationship with a fellow crew member, and became a pet owner when he adopted the cat Spot. He even briefly became the Captain of the USS Sutherland during the Klingon Civil War. 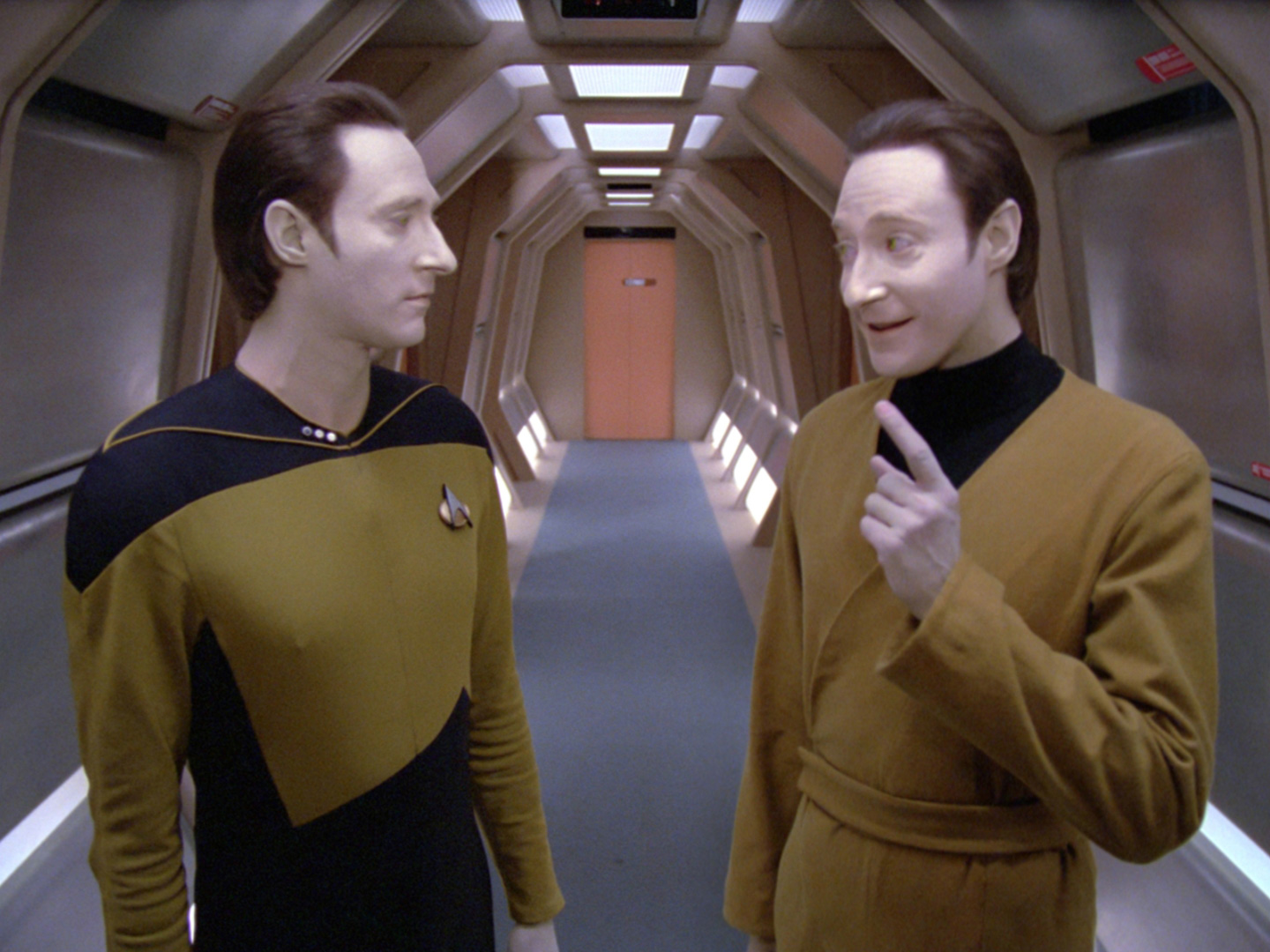 Most importantly, during his time on the Enterprise-D, he discovered that his brother Lore was alive, as well as his creator Dr. Soong. When he met his long lost father, Soong imparted one last gift to Data before he died: an emotion chip. Soong was then killed at the hands of Data’s deranged brother Lore, and Data’s fear of what emotions might do to him caused him to hesitate incorporating the chip into his operating system.

Data also encountered a woman named Dr. Juliana Tainer while on the Enterprise, who claimed to have once been married to Dr. Soong. She told him that she helped construct Data decades ago, effectively making her his “mother.” It turned out Dr. Tainer was an android too, only she didn’t know it. The real Juliana had died, and Soong created an android who looked and sounded like her and implanted her memories into it. Data chose not to reveal this information to her, and allowed her to live out the rest of her life. 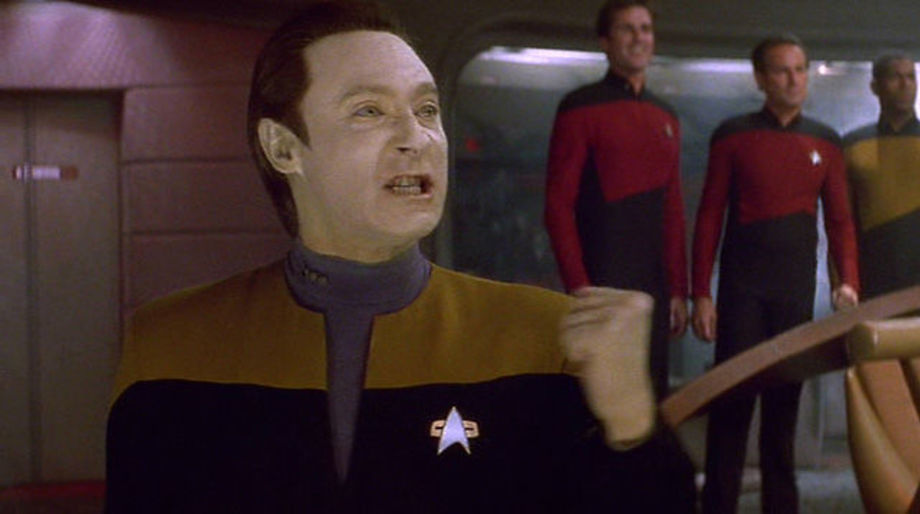 After years of internal debate, Data chose to integrate his emotion chip into his positronic net in the film Star Trek: Generations. At first, the new emotions overwhelmed him, nearly crippling him. But eventually, he got a handle on them. He learned he could  turn his emotion chip on and off, so he didn’t have to worry about emotional considerations in times of great stress, something they showed him doing in Star Trek: First Contact. He eventually was able to remove the chip completely. Although not indicated outwardly, it seems that Data chose to remove his emotion chip in his final days. 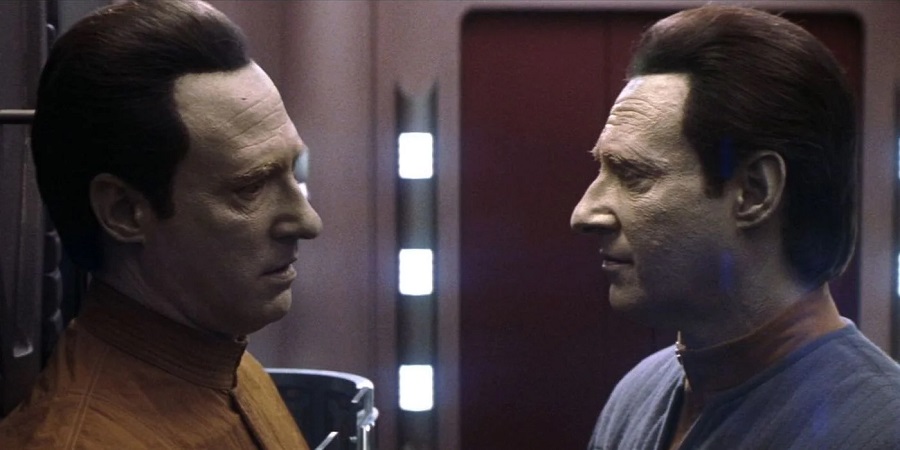 In the final TNG feature film Nemesis, Data discovers B-4 on a distant world. His android brother is in pieces and must be reassembled, and his programming is no where near as sophisticated as Data’s. B-4 was used as bait by the new Romulan Empire’s leader, Shinzon to lure the Enterprise to Romulan space. Data attempts to unload his memory banks into B-4, but it seems his more primitive systems can’t handle the information dump.

Later, when Shinzon attempts to attack the Earth, Data sacrifices his life to stop him, apparently blowing himself to smithereens along with the lead Romulan ship. After a private memorial is held for Data, Picard discovers B-4 singing a song called “Blue Skys,” a favorite of Data’s. This ending suggests that maybe Data’s memories actually did take hold in B-4, and that Data lives on in his android brother. 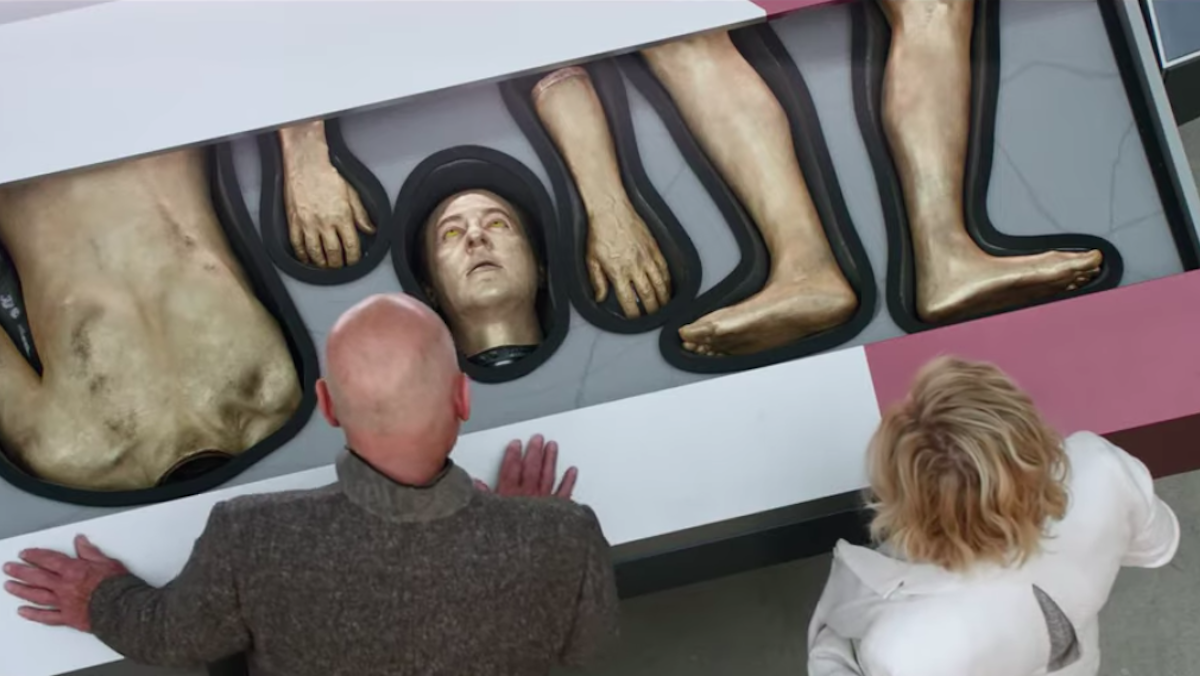 The new teaser for Picard shows what looks to be a Soong style android in pieces, covered in burn marks. Picard mentions how Data sacrificed himself to save him twenty years prior. But is this B-4, who was disassembled once again? The burn marks suggest they are the remains of Data himself, which somehow survived the explosion. But if Data survived, why was he being kept in storage and not repaired? And is this really Data we see playing cards with Picard at the end really him, or is he in Picard’s mind? Or is he B-4, now completely incorporating Data’s programming? We’ll hopefully get all our answers in 2020, when Star Trek: Picard debuts.