INTO THE SPIDER-VERSE Sequel Gets Release Date - Nerdist

INTO THE SPIDER-VERSE Sequel Gets Release Date

UPDATE: 11/01/2019 – We’re certainly not surprised to hear that Spider-Man: Into the Spider-Verse, the Oscar-winning animated adventures of Miles Morales, Peter B. Parker, Gwen Stacy, et al, would get a sequel. It’s one of the best animated movies of all time; naturally we’ll get more. But what we didn’t know was when. On All-Souls Day 2019, the good folks at Sony let us know. Spider-Verse 2 will hit cinemas April 8, 2022.

And that’s kind of all we know. Animated movies take a long time to come out; Spider-Verse was one of the most visually complex and interesting we’ve ever seen. So actually, a little over two years seems pretty fast for such a turnaround. Even still, we bet Sony’s got its whole heft behind the movie and want to ensure it gets the resources it needs to be excellent. A Pixar-killer, that first movie was.

Below is everything we know about the sequel so far. Check back for more updates!

Original Post Follows
We’ve known for a couple of weeks now that Sony was tentatively planning both a sequel to their new animated (commercial and critical) hit Spider-Man: Into the Spider-Verse and a spin-off involving three female web-slingers, but now we know more. In an interview with Amy Pascal (via ComicFade), Vanity Fair got some further deets on the next spider-toons, spider-toons, we thought we might never see in many blue moons. Most significantly, their deal for animated Spider-Man movies has no restrictions in the same way their live-action deal with Marvel Studios does.

She won’t say what the latter are, but it is revealed that Marvel’s Kevin Feige wasn’t too happy about the timing of a sequel being announced before Peter Parker gets un-snapped.The direct Spider-Verse sequel will feature a Miles Morales-Gwen Stacy romance (held off because they wanted to establish her as a hero first, love-interest second), though crucially, Pascal never specifically says whether or not it’s the same Gwen we saw in the current film, or one more properly from Miles’ reality. However, that Spider-Gwen will definitely be the lead in the spin-off, which will costar Jessica “ Spider-Woman” Drew and Cindy “ Silk” Moon, the last of whom is also likely to get a live-action movie in what they’re now calling Sony’s Universe of Marvel Characters, or SUMC. Both animated films are said to stay true to recent runs of the comics. “I think itâ€™s great that weâ€™re going to be able to tell movies about female superheroes in this realm, and in the live-action realm as well, because I believe that there are going to be characters that really resonate for people,” says Pascal. 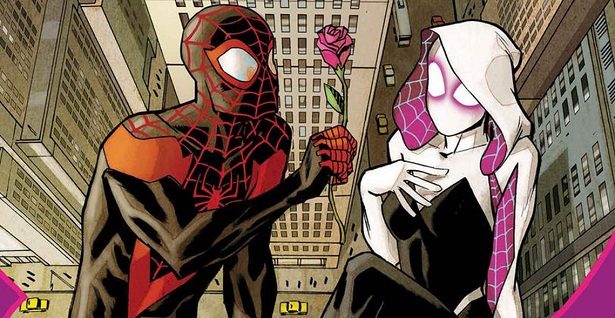 And speaking of that “SUMC,” in addition to the Jared Leto Morbius movie underway, there are tentative plans for Silver Sable and Black Cat ( which we knew), Kraven, Jackpot, and Nightwatch. There’s even a chance that the Sinister Six movie, originally intended to spin off from Andrew Garfield’s Spider-Movies, might get rejiggered to fit the new live-action continuity, if Drew Goddard agrees to direct again.But as for whether Tom Holland’s Spidey could ever be included? Sorry, fans, but, “it would be years in the future, after Holland’s Marvel contract expires.”