Tiny, Spider-like Robot Will Be Sent to the Moon in 2021 - Nerdist

Tiny, Spider-like Robot Will Be Sent to the Moon in 2021

In a move that is both inspiring and slightly creepy, a U.K. company plans to send a relatively tiny spider-like robot to the Moon in 2021. The spider-like bot—which only has four legs as opposed to eight—will scour the surface of the Moon, beaming high-definition video back to Earth, as well as LIDAR data that will make various distance measurements. There is no word on whether or not this is the beginning of a spinoff Dr. Who episode though.

All jokes aside, this little solar-powered 2.2-pound spider-like robot has a lot to boast about. Like its size, for example. According to Britain’s The Times, the crawly box-headed rover, simply named “The Walking Rover” by its creators at U.K.-based space technology company Spacebit, will be the smallest lunar rover in history. And yes, obviously there haven’t been that many lunar rovers, but still, this bot will deserve its record if/when it lands on the Moon.

CNN also reports that The Walking Rover will be able to explore “lunar lava tubes,” which are “tunnels on the Moon that are thought to have formed during basaltic lava flows.” In an interview conducted by CNN, Spacebit’s CEO, Pavlo Tanasyuk, says that these tunnels may provide a good starting point for shelters when people return to the Moon. 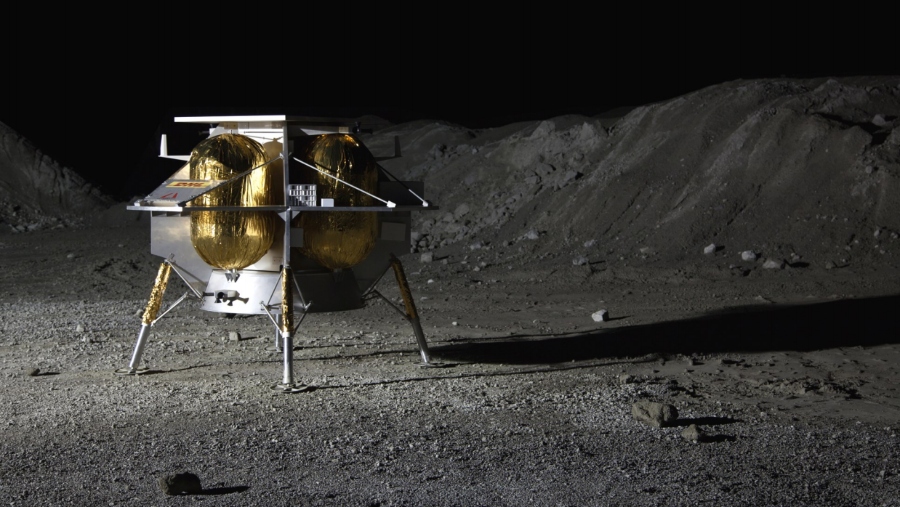 Astrobiotics’ Peregrine lunar lander, which will be used to deliver The Walking Rover to the Moon’s surface.

Perhaps the most notable achievement for the The Walking Rover, should it land on the Moon, would be its status as the first-ever lunar rover sent by the UK. As The Times notes, only three other countries have sent rovers to the Moon, including China, Russia, and the US. All of those rover projects were also backed by the countries’ respective governments, whereas The Walking Rover will be an endeavor solely funded by private-sector money.

Spacebit says its goal is to “democratize” space by making the area of exploration more affordable.

While The Walking Rover is being sent by a private U.K. company, the rocket and lunar lander that will take it to the Moon’s surface will both be made in the US. The lunar lander (dubbed the Peregrine lander) that will be used to deliver the spider-like bot, as well as other scientific instruments, is being built by Astrobiotics, and the rocket itself will be ULA’s Vulcan Centaur. This 2021 Moon mission will be the maiden voyage for the Vulcan Centaur, and will also mark the first time a lunar lander has been sent to the Moon since Apollo.

What do you think about this little lunar crawler? Do you think legs are the future of space probes, or are you in the “wheels or bust” camp? Let us know your thoughts in the comments!