Our Sneak Peek at a The Yellow King Roleplaying Game - Nerdist

Our Sneak Peek at a The Yellow King Roleplaying Game

This is the thing that troubles me, for I cannot forget Carcosa, where black stars hang in the heavens, where the shadows of men’s thoughts lengthen in the afternoon, when the twin suns sink into the Lake of Hali, and my mind will bear forever the memory of the Pallid Mask. I pray God will curse the writer, as the writer has cursed the world with this beautiful, stupendous creation, terrible in its simplicity, irresistible in its truth — a world which now trembles before the King in Yellow.

An idea, like a virus, will spread of its own volition, and all the powers of civilization can at times seem helpless to stop it. And when such ideas bring darkness, death, madness and alien malice, what will you do to stop it? 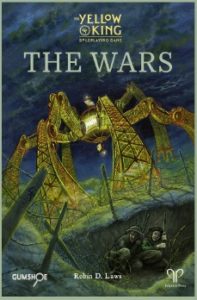 Those are the ideas at the heart of The Yellow King Roleplaying Game, a new RPG from Robin D. Laws and the collected savants of Pelgrane Press which is currently on Kickstarter. Based on the horror stories of Robert W. Chambers, The Yellow King RPG has four settings for characters to vie against bedlam: 1895 Paris, during the “great European conflict of 1947”, an alternate 2017 where a revolt in America has just toppled a dictator in service of the Yellow King, and our current 2017, where things have gone wrong just below the surface… These settings can be explored piecemeal through one-shots, or through an epic, time-spanning campaign in which characters, like rats trapped in a maze, keep coming upon each other again and again and again. The game uses Laws’ award-winning GUMSHOE system, and met its funding goal in a mere four hours, and as of this writing, has grossed $116,937.

The fine folks at Pelgrane Press gave Geek & Sundry a sneak peek at the contents of the game, and put together a preview of the book for our loyal readers which you can read below.

So let us tell you why this game is creepier than finding a human toe in your chili.

[It is a] game essentially about mind-killing memes, one that deals not just with individual madness but madness at the scale of entire nations, the sense that everything is unraveling—well, that’s our current time even more so than it was 1895, when these stories were published.

And so what’s old is new again, and can be explored with The Yellow King Roleplaying Game.

EVEN IF YOU’VE KILLED CTHULHU AND DRACULA, THIS GAME IS DIFFERENT.

The horror of Robert W. Chambers is like nothing else. It might not be going too far to say his work is unique in all the annals of horror literature, and is particularly of this moment. (And thanks to the generosity of pre-1922 copyright law, you can read the stories for free here!)

All his stories revolve around a play entitled The King in Yellow which seems boring and quaint as badly written fantasy in the first act, but 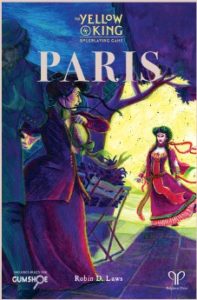 the second act drives you insane. Furthermore, the existence of the book in some way twists reality, as if it had a sort of cultural gravitational pull…

Gaming great mind and Yellow King creator Robin D. Laws put it this way in an interview with Geek & Sundry:

Chambers’ central idea of a play that, once read, could lead you to destruction or even completely alter the your personal reality, leads to a different emphasis than, say, Lovecraft’s cosmic horror or the monster hunting of other classic horror RPGs. Playing a set of connected characters who may or may not be refractions of one another puts it through a particular lens as well. And the game’s quadruple setting places you not only in a very specific horror sub-genre, but then sub-sub-genres that: historical gaming, weird war, political horror, and finally modern horror.

THEY CALL IT SUBJECTIVE REALITY HORROR

Your wife disappears, and no one you know even remembers she ever existed, and soon, you begin to wonder if she was only ever a dream.

One of [his] classic stories, “The Repairer of Reputations”, tells us a story of an imminent coup in a very strange 1920s America. When it was published, in 1895, that was a vision of the future—but a skewed one, because we’re being told the tale by not just an unreliable, but a delusional, narrator. Reading the story now is extra disorienting, because it’s describing a past that never was—an alternate reality. The game takes that idea one step further, positing that a suppressed, decadent play about an alien god-king, The King in Yellow, is so powerful that it not only warps the minds of those foolish enough to read it, but warps reality itself. It takes the delusions laid out in that story and forms a whole timeline out of them. So the reality horror of [The Yellow King Roleplaying Game] is not just interior—the idea that you can’t trust your perceptions on a basic level. It also imagines that malign forces can trap all of us in a world that was never meant to be.

And who, in 2017, does not feel trapped by malign forces in a world not meant to be? This Kickstarter will be over before you know it, so if you want in, you better jump on it fast.

Now, behold the horrors of The Yellow King!

Have you seen the Yellow Sign? Let us know in the comments below!

Ben Riggs speaks five languages and has lived in four countries on three continents, but still manages to lose his keys in the bathroom. A friend to man, animal, and werewolf alike, you can discover more of Ben’s thoughts on game, the universe, and everything on Twitter, or on the Plot Points podcast. He is also the liberal voice on Across the Aisle, a podcast where a liberal and conservative work together to solve the 21st century’s problems.