Experience The Joy of Limitless Carnage in Slaughterball - Nerdist

Experience The Joy of Limitless Carnage in Slaughterball

Tired of sluggish games where you don’t spike a metal ball right into the face of your opponents? Well, luckily for you, Slaughterball is here with the remedy for your doldrums.

Slaughterball is a sci-fi table-top sports game for 2-4 players, which had a successful Kickstarter in early 2016. Stepping into the crowed genre of fantasy sports-games of such titles as Bloodbowl, Dreadball, and Kaosball, it’s fair to wonder if we need another game playing out the over-the-top ultraviolence in a sports skin. Of course we do! Slaughterball builds on some of the best innovations of its sister games which preceded it. If you are looking to take a dip into this genre, Slaughterball should certainly be on your list to check out. 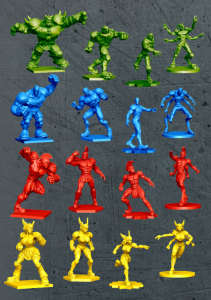 You have a team of specialized players, some who are good at passing, catching and shooting, some at plowing through people, and some a mix of both. The mechanics are pretty straightforward: when you want to accomplish something you roll lots of custom dice and compare your result to target numbers or contested rolls. Players also have a hand of cards to throw down which give them an edge in certain aspects of the game. All of this is pretty par-for-the-course for fantasy sports-games, but allow me to highlight some characteristics of the game that really make Slaughterball a delight to play.

The game can accommodate not only two but three to four players as well, and it scales nicely. Slaughterball–with its special hexagonal board for three player symmetry–gives a welcome and action-packed option for you and two buddies. The physical production of the game looks great, which is to be expected from any minis game, but one really nice aspect of ther design is the shape-coded bases on the figures. The class of the figure is represented by the shape of the base, so at a glance you can tell your “cleavers” from your “slashers,” which helps keep the tempo of game-play on track.

Speaking of tempo, the ebb and flow of the game is well measured out. You only play six rounds (meaning you will activate your guys six times), so there is not a long and drawn-out collection of moments that don’t feel relevant. When it’s your turn, you feel the importance of making your moment count. Also, unlike other fantasy sports games, 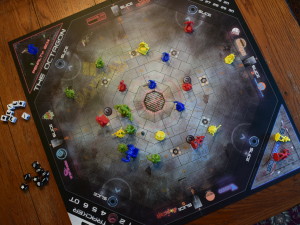 Slaughterball‘s overall play mechanics are simpler so you can proceed with what you came to do (roll a million dice) without the game feeling like a chore. The game also nixes the persistent fail-and-your-turn-ends mechanic of games like Blood Bowl, though Slaughterball has cards whose effects are similar. The result is that you have a dynamic game of action rather than a static game of looming inaction cursed with the feeling that you didn’t meet the potential for your turn.

Slaughterball is also versatile in its three modes of play. You can have a scrimmage game where all players have symmetrical stock characters, which is useful if you are teaching the game to new players or want a short one-off match. There is exhibition play where the four teams (in the base set) all have unique specialties. And finally, you can play a league tournament which is a collection of exhibition games over time where your players progress and develop personalized traits–great for your crew of dedicated gamer buds that meet regularly. 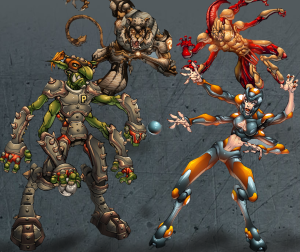 Another detail in Slaughterball that is rather elegant is the catch-up mechanic where the player in last place has some say over where the ball scatters after a goal or fumble. This is not a game-breaker, but it’s a pretty substantial ability that adds some great rubber-banding to the gameplay. I’ve purposely scored less points in a single goal so that I could remain in last place and be able to scatter the ball back to one of my athletes. This rule adds a nice layer of decision-making and a graceful way for those who are behind to hedge their chances to catch up.

The game is not perfect by any means, but for the most part, Slaughterball is a fine addition to the fantasy-sports game line-up, and one I would recommend if you’re looking to get into that genre. Additionally, if you are a die-hard fan of the other games that preceded it (and you have a sizable chunk of change, because honestly, the game is not cheap) you might as well get the most polished iteration in the genre to date.

What’s your favorite fantasy-sports game? Are there mechanics or themes that you would like to see adopted into this genre? Let us know in the comments!

Image Credits: Frog the What Games