Sirfetch’d is Your Newest Leek-Wielding Pokémon

They’ve discovered a new Pokémon in the Galar region! The Pokémon Company International and Nintendo just announced a brand new addition to the hotly anticipated Pokémon Sword Pokedex. It’s called Sirfetch’d, and is a Galar region variation of the Wild Duck Pokémon, Farfetch’d. If you think this little guy looks like a pissed off duck holding onto a giant onion, you’re not far off! Sirfetch’d is known for using a sharp stalk of leek as a lance when in battle, along with some thick leaves as a shield. (If Sirfetch’d is making you think of Game of Thrones “onion knight,” Ser Davos, we don’t blame you.)

The Sirfetch’d are fighting Pokémon that stand at 2 feet, 7 inches, and weigh in at 257.9 pounds. The Farfetch’d can actually evolve into the Sirfetch’d after they experience many battles. They’re said to be “calm and collected,” and are known for their very fair battles. That fairness has given them a whiff of nobility among other Pokémon, so much so that they’re often used as motifs in paintings seen around the Galar region.

You’re probably wondering about that vegetable weapon, right? According to the Pokémon Company International‘s description of the Sirfetch’d, the leeks are maintained by the creatures over the span of many years and are their most treasured possessions. When the leek withers and dies, that means it’s time for the Sirfetch’d to retire from battle altogether. The Sirfetch’d are also the only players in the game able to master a move called “Meteor Assault,” where they point their leaks and charge at their opponent at full speed. The incredibly powerful move also comes at a cost–right after using it, the Sirfetch’d are unable to take immediate action. 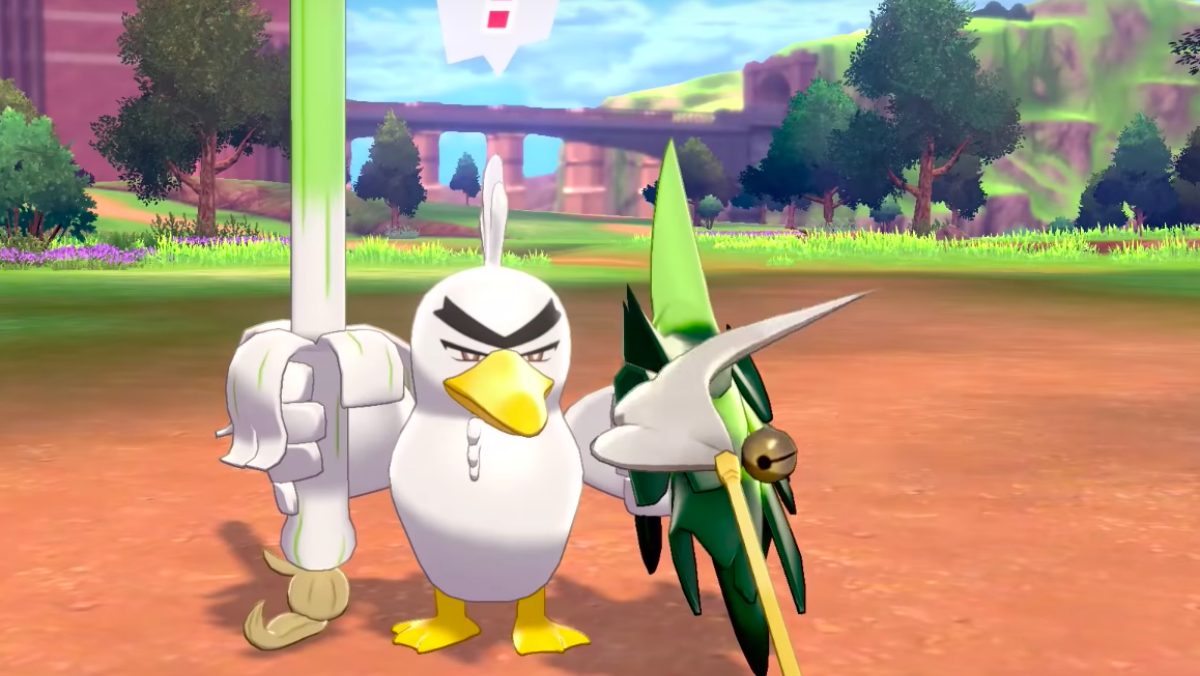 Sirfetch’d joins many other Galar region variations of pre-existing Pokémon, like Wheezing and Zigzagoon.

The internet has already taken to this powerful little duck with a leek weapon. Fan art has popped up and it seems folks are ready and willing to embrace this new member of the Pokémon family.

my take on the new pokemon teaser. sirfetch’d? galarian farfetch’d? is it finally his time to shine?? pic.twitter.com/Zb9laoe6as

You’ll get your chance to officially meet Sirfetch’d when Pokémon Sword and Pokémon Shield hit Nintendo Switch on November 15.