Will Shuri Become BLACK PANTHER in the MCU? - Nerdist

Will Shuri Become BLACK PANTHER in the MCU?

As Black Panther‘s record breaking run at the box office continues, fans are already starting to ponder what the future holds for the Afrofuturist superhero franchise that’s quickly changed the face of Marvel‘s movies. One of the most incredible things about director Ryan Coogler‘s vision for Wakanda is its stupendous ensemble cast, largely comprised of well-rounded and unique women, a rare feat in any Hollywood movie let alone in the homogeneous world of the MCU.

Black Panther is one of the few superhero movies that passes the low bar of the Bechdel test with flying colors. In a film so full of fantastic characterization, it’s often hard to pick a favorite. But T’Challa’s genius younger sister Shuri–played by Letitia Wright–is easily one of the best additions to the Marvel Cinematic Universe in an age. Wright plays Shuri with a joyous intelligence and a fun freshness. Her performance left a lot fans asking: What’s next for the Princess of Wakanda? Well, fellow Shuri fans, strap in because we have some very, very good news. Originally introduced in Black Panther Vol. 4 #2 in 2005 by Reginald Hudlin and John Romita, Jr., Shuri is the younger half-sister of T’Challa and daughter of Queen Ramonda, who in the comics raises T’Challa after his mother dies. One of the defining features of Shuri’s characterization is how she dedicates her life to being the first female Black Panther from childhood. There’s a great nod towards this in Coogler’s movie when T’Challa asks for challengers to the throne and Shuri raises her hand before making a quip about things taking too long. But in the comics, it’s a real dream she ends up fulfilling. But we’ll get to that a little bit later. Even as a young girl, Shuri attempts to break into the arena to fight the previous Black Panther, her uncle S’Yan, and gain the prestigious title herself. But before she gets the chance, S’Yan is beaten by another fighter–her big brother T’Challa.

Though she had yet to take on the mantle of Black Panther, Shuri played a large part in protecting the kingdom, even defeating Radioactive Man after Ulysses Klaw and a band of mercenaries invaded Wakanda to destroy the secretive nation’s vibranium in Black Panther Vol. 4 #6. After the death of Radioactive Man, T’Challa vowed to help his sister train to become a warrior so she could take over the mantle of Black Panther when the time was right. That would actually come to pass sooner than anyone in Wakanda wanted–even Shuri herself–after T’Challa was severely injured in a jet crash after a mission to meet Namor’s villainous Cabal, leaving Wakanda in need of a leader. Shuri became Queen, and after taking part in the traditional trials, took the heart-shaped herb in defiance of the Panther god Bast–who rejected her–to assume the mantle of the Black Panther. 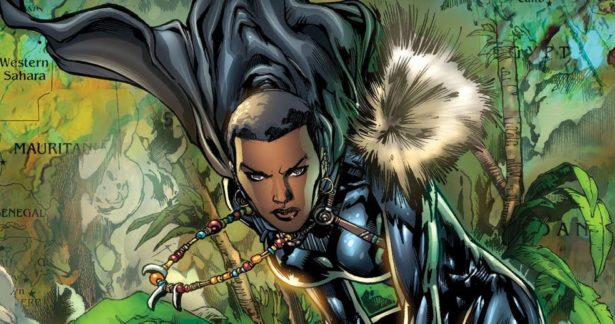 Shuri has canonically been the Black Panther in the comics, and after her electrifying role in the recent movie, we think she’ll transform at some point in the future of the MCU. If you look at T’Challa’s journey and the direction the MCU is headed as we hurtle towards Infinity War, Shuri as Black Panther makes a lot of sense. In the face of a changing world, one threatened by intergalactic war and space gods, we know T’Challa’s attention will soon be pulled away from Wakanda. We also know from the Infinity War trailer the war will soon be coming to Wakanda. When T’Challa has to leave the wartorn Wakanda to join the Avengers in their fight against Thanos, Wakanda will need someone to lead and we believe (and hope) that person will be Shuri.

Although Shuri is the first female Black Panther in the comics, things in the Marvel Cinematic Universe of Wakanda may be different. When T’Challa visited the ancestral plane where the spirits of deceased Panthers rest, both women and men were there, suggesting Coolger’s Wakanda has potentially seen female Black Panthers already. Also, when Nakia, Ramonda, and Shuri were travelling through the mountains to the Jabari region, Ramonda implored Nakia to take the purple herb and become the Panther herself. So, we know the current Queen of Wakanda isn’t averse to a woman taking on the mantle and becoming the protector of Wakanda. We also know from the final fight scene between Killmonger and T’Challa that nothing in Wakandan lore prohibits two people acting as Panther at the same time. Perhaps we could see Shuri and T’Challa fight side by side in Shuri’s tech-heavy suits rather than as foes. Letitia Wright’s scene-stealing performance is inspiring. We think the creative minds behind the MCU will hand Shuri the mantle in a permanent fashion. Many fans suspect the Avengers as we know them will soon be no more, and that we’re likely to see a new team made up of T’Challa, Ant-Man, Wasp, Doctor Strange, the upcoming Captain Marvel, and the Guardians. If that happens, then Wakanda will definitely need a new protector, and Shuri’s just the person to do it.

Would you like to see Shuri take on the mantle of Black Panther in the MCU? Want to see T’Challa and his sister team-up in matching Panther suits? Let us know in the comments!