Settlers of Skyrim: A Gift of Love for A Catan & Elder Scrolls Fan - Nerdist

Settlers of Skyrim: A Gift of Love for A Catan & Elder Scrolls Fan

I certainly was green with envy seeing Imgur user menazavutcheburashka‘s post about receiving a unique handmade gift for her 21st birthday: a customized Settlers of Catan game set in the Elder Scrolls universe. The recipient of this gift, known to her loved ones as Daniela, described herself as a huge fan of both Settlers of Catan and Skyrim, which was why the game was so meaningful.  At the same time, it makes us incredibly envious, given how incredible and thoughtful every element of this game is. 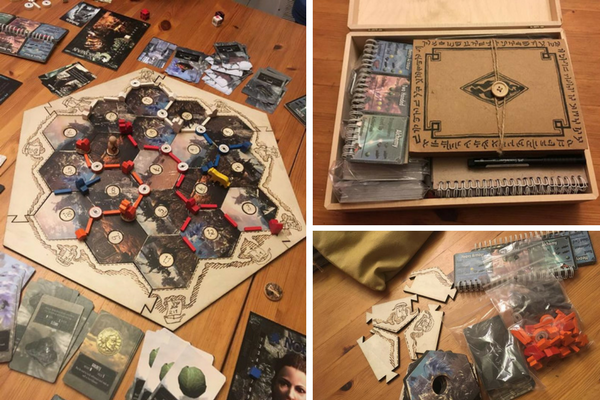 Daniela gave Geek & Sundry additional insight about the gift and why it was of particular meaning to her. Despite having an enduring love of Settlers of Catan (and its Cities and Knights expansion), but she told us she never owned a copy of Catan of her own, as she only ever played it with her sister and found it impractical for them to both own the same copy of the game. Lucky for her, this is no mere off-the-shelf copy. Heck, they even thought to create a 5-6 player expansion in a handmade bag.

Almost every piece in this game is made custom and demonstrates an incredible attention to detail. Olga Velenta and Lars Eriksen, the creators of this gift, went so far as to laser cut all the wood pieces of the board, apply stunning Skyrim-inspired designs for each tile, create custom cards and trackers, and even created special rules which they put into a handmade rulebook.

As Daniela describes the unique book, “The rule book contains a small birthday note for me, and about 10 pages explaining the differences between the original game and their version (explanation of how the followers work, layout of the character cards, Shouts, etc.).” She mentioned that they didn’t include the full rules of the game as she and Olga play so often that they both know the rules very well. Additionally, a number of changes were made to the base game, as Daniel chronicled in her Imgur post.  For example, Knights were changed into Shouts and a hand-carved Dragon Track is used. 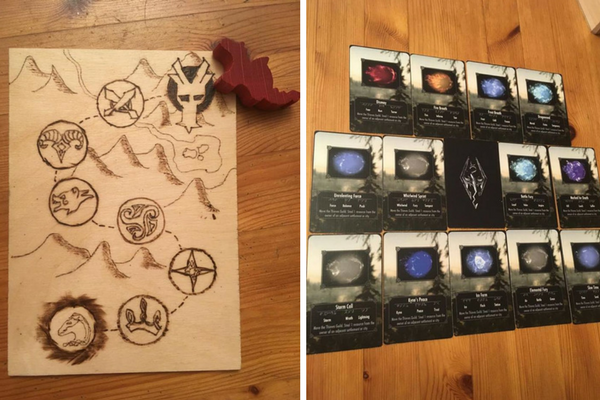 Additionally, they added character cards, which helps players identify their player color and track their cards and victory points. Like the character creation part of Bethesda RPGs, they also give you the choice of playing a male or female as these cards are double sided. 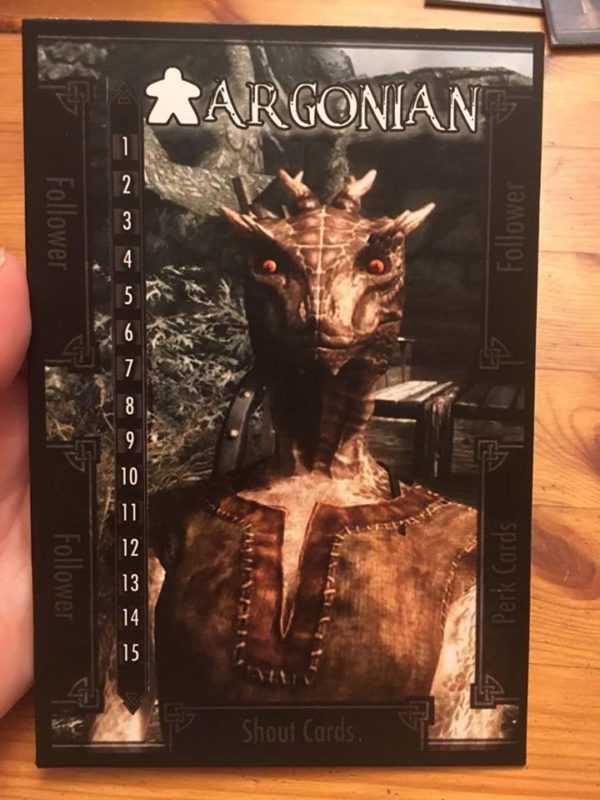 Another custom rule to better encapsulate Skyrim’s gameplay into the game was changing walls into followers. As Daniela put it, “City walls simply let you carry more resources, and followers are sworn to carry your burdens right?” It also gave an opportunity for Olga and Lars to include one more element of personalization: the addition of Bingo, a family pet, into the game as a follower. 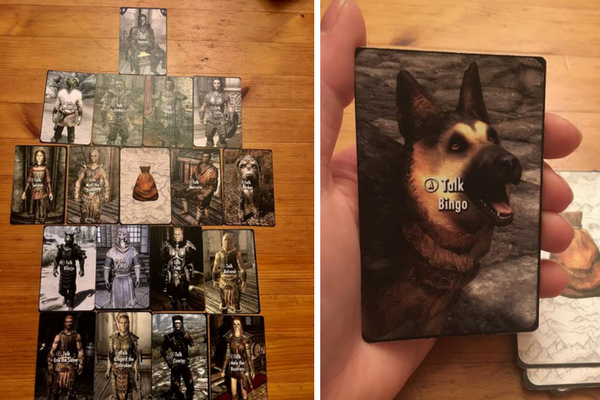 Daniela also mentioned that she hopes to join in with Lars and Olga and create a set to send to Bethesda, publishers of the Elder Scrolls games. While we find it hard to pick between the Fallout and Elder Scrolls franchise, we’d definitely pick a copy of this game over a box full of bottlecaps to receive as a gift. Check out the gallery below to see all the details put into this one-of-a-kind gift, and share our envy.

What videogame/tabletop game mashup would you love to see become reality? Let us know in the comments!