Set Off For Adventure in Mission: Red Planet - Nerdist

Set Off For Adventure in Mission: Red Planet

If the concept of battling over Mar’s resources wasn’t interesting enough, this whole game is coated in a gorgeous layer of steampunk style. While the game’s core is based on territory control
mechanics, the real excitement and strategy comes from how and, above all, when you play your character cards. 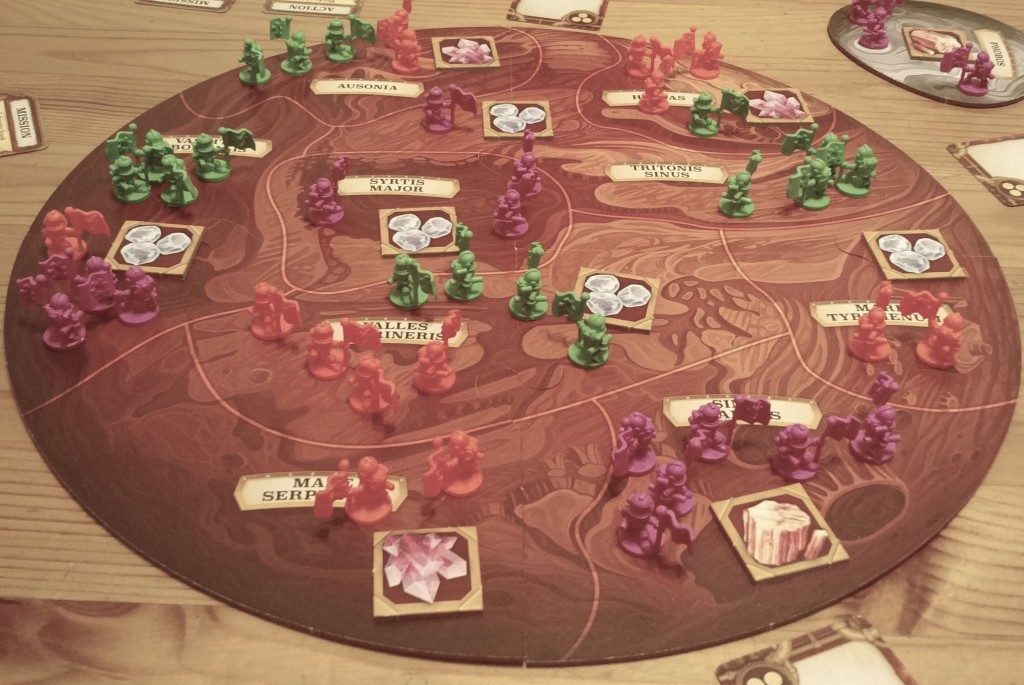 The discoveries you find and use against your opponents, the hidden mission objectives, and pleasant tactility of loading and unloading rocket ships makes Mission: Red Planet the game I cannot wait to play again.

The objective is fairly simple; have the most points at the end of ten rounds. Points are earned by collecting resources on Mars and its orbiting satellite Phobos, in addition to bonus points awarded for any completed mission cards. More so, there is a global mission card that is awarded to the player who collects the most ice on Mars, because water is important for our survival.

Mars is separated into nine territories, ten if you include Phobos. Each has a randomly assigned a resource at the beginning of the game. When an astronaut arrives, the resource is revealed to the players and will begin yielding on each of the production phases. To collect resources, a player must have control of the territory by having the most astronauts in that area. Considering there are only a few ways to eliminate opposing astronauts, most of the time, players will be carefully managing the resources necessary to send the most astronauts to a location before production rounds. 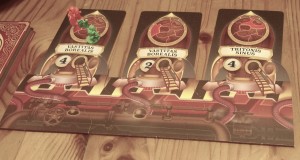 One of the most exciting mechanics in the game is rocket ship travel, the only means of getting to Mars. Each rocket has a location and a capacity and will launch once full. This means that multiple astronauts controlled by an number of different players may all be present on a single rocket when it arrives on Mars. That said, fighting for space on each of the rockets is paramount to success.

Your actions are defined by the character card you choose to play at the beginning of each round, 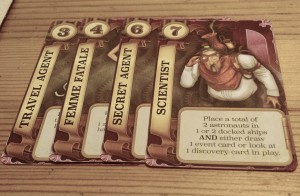 which cannot play again until they are returned to your hand. Most of the characters allow you to place one or more astronauts into a rocket before launch, in addition to various other bonuses, such as launching rockets prematurely, eliminating other astronauts, and even moving your astronauts around the map itself. This has got to be hands-down my favorite part of the game. You cannot play characters you have already played, unless you take a turn to play the character that returns them all to your hand. Knowing when to do this, and having the confidence to do so, is all part of the excitement.

The mechanics are elegantly simple without sacrificing strategic depth, and of course the components are of the utmost quality that we have come to expect from Fantasy Flight Games. For a game that has been only recently reprinted, I am rather impressed with how well it holds up, and I cannot wait to play it again.