SCOOB! Trailer Shows The Origins Of Scooby-Doo And Mystery Inc.

For fifty years, Scooby-Doo has been a fixture in the lives of mystery-loving children around the world. The goofy dog, his hippie owner Shaggy, and their more serious-minded friends Fred, Velma, and Daphne make up Mystery Inc., a team of amateur sleuths who get to the bottom of mysterious incidents, investigating haunted houses, mines, fairgrounds, and more. But how did this group first get together? They’ve always seem a little randomly paired. If you’ve been wondering that question since you were a kid, worry not. The first trailer for the upcoming Warner Bros. animated film Scoob! is here to show us the early days of Shaggy, Scooby, and Mystery Inc.

If this trailer made you a little emotional, you’re definitely not alone. Knowing that Shaggy rescued Scooby as a stray hit us right in the feels, and it only gets more emotional when you see the origin of Scooby-Doo’s famous blue collar. After all these years, we feel pretty attached to these characters—and would follow them anywhere. So seeing them from the beginning will be a fun adventure for us all.

Here’s the full synopsis for Scoob!

Scoob! reveals how lifelong friends Scooby and Shaggy first met and how they joined with young detectives Fred, Velma, and Daphne to form the famous Mystery Inc. Now, with hundreds of cases solved and adventures shared, Scooby and the gang face their biggest, most challenging mystery ever: a plot to unleash the ghost dog Cerberus upon the world.  As they race to stop this global “dogpocalypse,” the gang discovers that Scooby has a secret legacy and an epic destiny greater than anyone imagined.

The voice cast for this film is also stacked. Will Forte is playing Shaggy, with Frank Welker as Scooby-Doo, Zac Efron as Fred, Gina Rodriguez as Velma, and Amanda Seyfried as Daphne. Kiersey Clemons will play a character named Dee Dee, with Jason Isaacs as the infamous Dick Dastardly, Ken Jeong as Dynomutt, Tracy Morgan as Captain Caveman, and Mark Wahlberg as Blue Falcon. The film is directed by Tony Cervone, who also directed Space Jam.

In addition to the trailer, we also have a new teaser poster for the film, which shows a young version of Scooby-Doo with an adult-sized shadow. “His tail begins,” the poster reads. 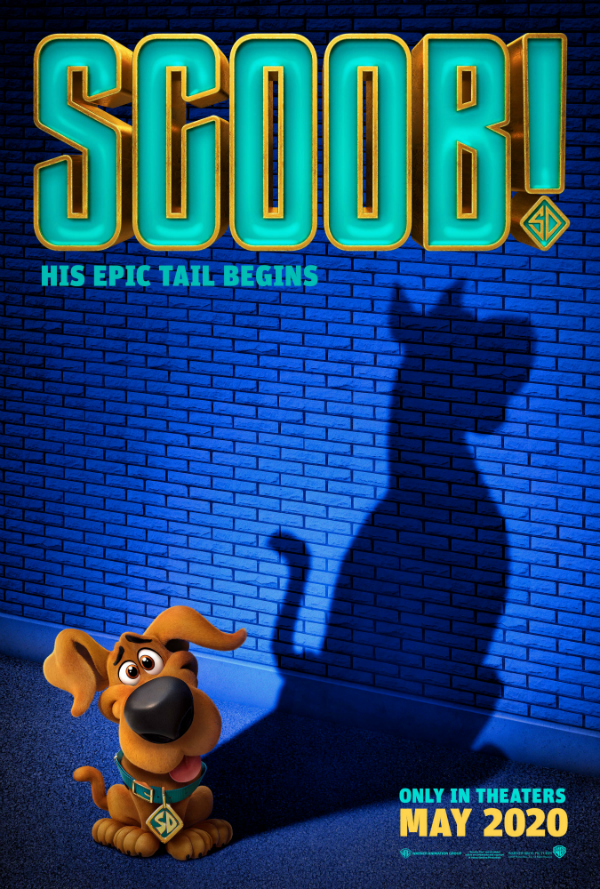 Warner Bros. is also launching a puppy augmented camera activation called “Scoobie Selfie” that will let fans play with Scooby-Doo on custom Instagram, Facebook, and Snapchat interactive lenses. Head over to ScoobSelfie.com to take a selfie with a baby Scoob or even play fetch with the famous pooch.

All of this has us extra excited for Scoob! A talented cast, a heartfelt trailer that plays into nostalgia, a funny and cute teaser poster, and an interactive element that lets us hang out with a Scooby-Doo puppy? They’re playing their cards right for this one. We’ll keep you posted as more information for Scoob! becomes available. The film is set to bark its way into theaters in May of 2020.