The Science Behind Why Brownie Skins Are So Dang Shiny - Nerdist

The Science Behind Why Brownie Skins Are So Dang Shiny

You may have made a tray or 7,000 of brownies in your time, but we’ll bet you’ve never given much thought to the reason why brownie skins are so dang shiny. Luckily, YouTuber and chef Adam Ragusea has thought deeply about the mysterious, crispy skin of the beloved dessert treat. And the science behind its gloss will leave you hungry for more culinary science. And more brownies.

Digg reported on Ragusea’s video, which the chef recently posted to his YouTube channel. Ragusea, who likes to perform “culinary investigations” and experiments, has made tons of other drool-inducing food explainers previously. As well as a bunch of recipes that would make Homer Simpson’s head explode.

In the brownie-skin explainer (above), Ragusea speaks with a Harvard professor, Dr. Pia Sörensen, to find out the science behind the shininess. Sörensen, a PhD in Chemical Engineering and Applied Materials, hypothesizes that the thin layer of brownie skin forms from a foamy layer of air bubbles suspended in relatively starch-starved liquid batter. The idea being that the starch settles into the brownie’s guts, leaving a wafer-thin meringue on top.

So, what did you do at work today? pic.twitter.com/VQzjh2lugn

Ragusea then proceeds to bake up a few skins and figure out exactly what they’re made of. Doing so by painstakingly peeling little bits of gossamer skin here and there off the brownie’s “guts,” and then drying them overnight.

When Ragusea is finally able to compare dry brownie skin to dry brownie guts, it turns out that both have, essentially, the same proportion of ingredients; meaning the idea that the brownie skin develops its sheen thanks to its having a different chemical makeup versus the guts is defunct. Which, while ruling out that difference as an option still leaves the question: What causes the shine?! 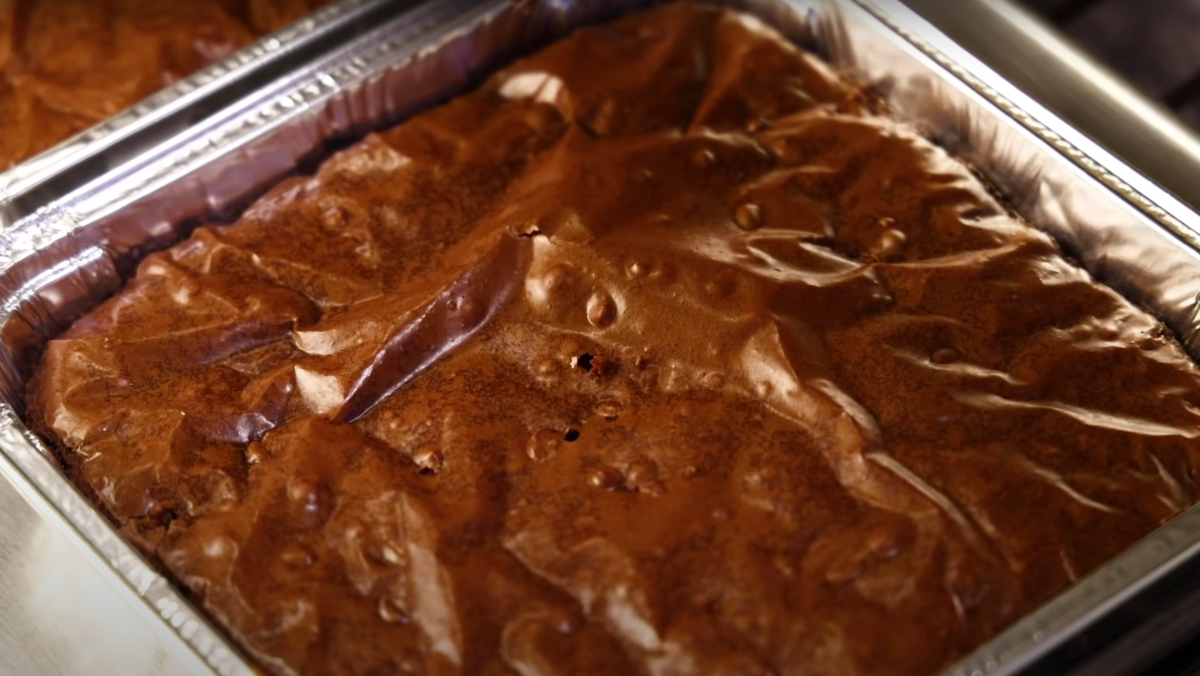 Somewhat anticlimactically, Ragusea finally lands on the skin’s smoothness as the reason for its shine. He notes, for example, that the bottom of brownies are often pretty shiny too; as well as smooth, from being pressed up against a pan. And because the skin is so smooth, light is able to reflect off of it directly; as opposed to a rough surface, which scatters the light.

As for the perfect recipe for making the shiniest brownies ever? That’s unclear. Ragusea says in the video he needs to do more research to find that answer, and frankly, so should all of we. That’s why you must bake more brownies. It’s the only way to uncover the fundamental mysteries of nature! And clear out your pantry!