SCHITT'S CREEK Motel and Mansion Are Both for Sale - Nerdist

SCHITT’S CREEK Motel and Mansion Are Both for Sale

With so many people stuck at home during 2020, Schitt’s Creek went from the show everyone should be watching to the show everyone did watch. The series became a quarantine phenomenon. And the cast and crew took home all the Emmy awards. Now you can celebrate the show by making its real-life locales your very own home. The family’s incredible mansion and the motel they were stuck living in are both for sale. But bébé, neither of them is cheap.

Zillow has a listing (which we first learned about at Architectural Digest) for the Rose clan’s enormous mansion, their extravagant residence before money woes forced them into their shabby little motel. The very real home, known as La Belle Maison, is located in Toronto. It just hit the market for $14.98 million Canadian. That’s roughly $11.79 million US. 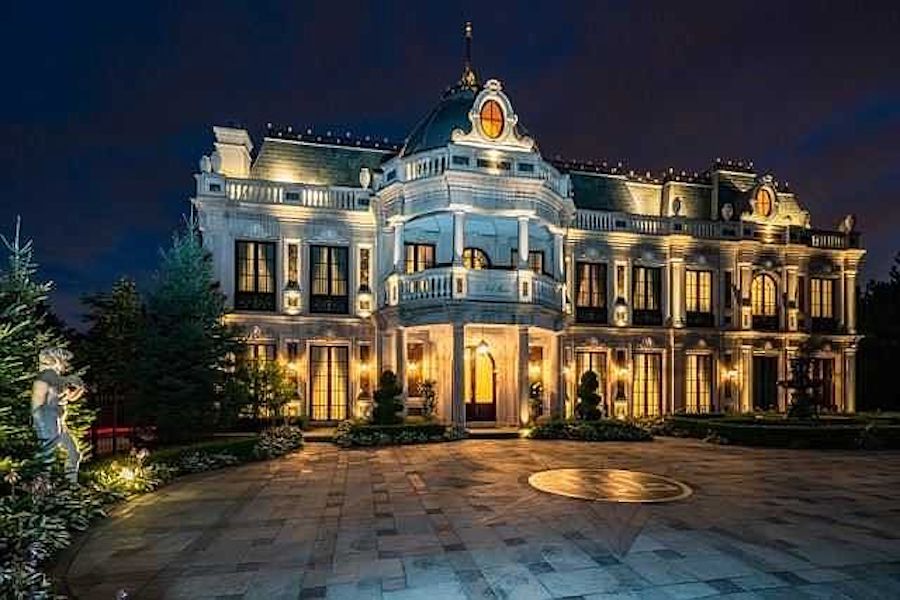 For that price you’ll get 24,000 square feet, with 5,000 square feet of “luxury living.” And they do mean luxury. The mansion includes 12 bedrooms, 16 bathrooms, a home theater, gourmet kitchen, wine cellar, billiard room, sauna, swimming pools both inside and out, and “breathtaking balustrades and ceiling motifs.” It also boasts “unique architect craft carved limestone.” And it has a massive foyer that has Sistine Chapel-inspired frescoes and a grand marble staircase.

This price tag for the custom-built home, finished in 2012, is technically a bargain. Kinda. It was originally listed in 2018 for $22 million Canadian. But if you’re not the Canadian Bruce Wayne and are looking for something slightly more affordable and less ostentatious, you can instead buy Schitt’s Creek‘s signature Rosebud Motel. The 10-unit Hockley Motel in Mono, Ontario is also looking for a new owner.

It would still make for one expensive joke birthday gift. Sitting on 6.7 acres, it has an asking price of $2 million Canadian. We know who we’d like to see buy it. And we don’t mean some down-on-their-luck rich family. Does anyone know if Emmy awards come with a cash prize?