Saving the Future With No Time To Explain - Nerdist

Saving the Future With No Time To Explain

So let’s say you’re relaxing at your house, listening to a favorite tune or watching TV. Then, suddenly, you—from the future—bursts into the room, insisting that the only way to stop what’s about to happen is to follow your future-self into battle. Would you do it, or would you be dumbfounded enough over the fact that you asked yourself to save the future?

Regardless of your answer, that’s the groundwork for TinyBuild’s No Time To Explain, a challenging platforming game that’s been out for years on the PC front before recently making its debut on the Xbox One platform. The time travel plot is just the beginning, as the story goes even further off the rails (yes, that’s possible) once your future self is put into peril by a number of enemies: be it a large crab with menacing claws (and, for that matter, a connection to a large UFO) or a shark with extendable limbs.

The goal of the game is to get your character from the start of a level to the portal at the end of it, all while your future self suffers in the clenches of enemies. Getting from point A to point B is an interesting journey, however, thanks to two key factors.

First off, you can’t really just run across the stage, as your character is too slow and unable to jump across large gaps. Fortunately, you’re carrying a giant laser that works as a reverse jetpack, propelling you off the ground and into the air. It only lasts for so long, however, so you’ll need to make sure to time your shots carefully. (Water is a helpful item in certain stages, as it allows you to get more propulsion out of the laser.) 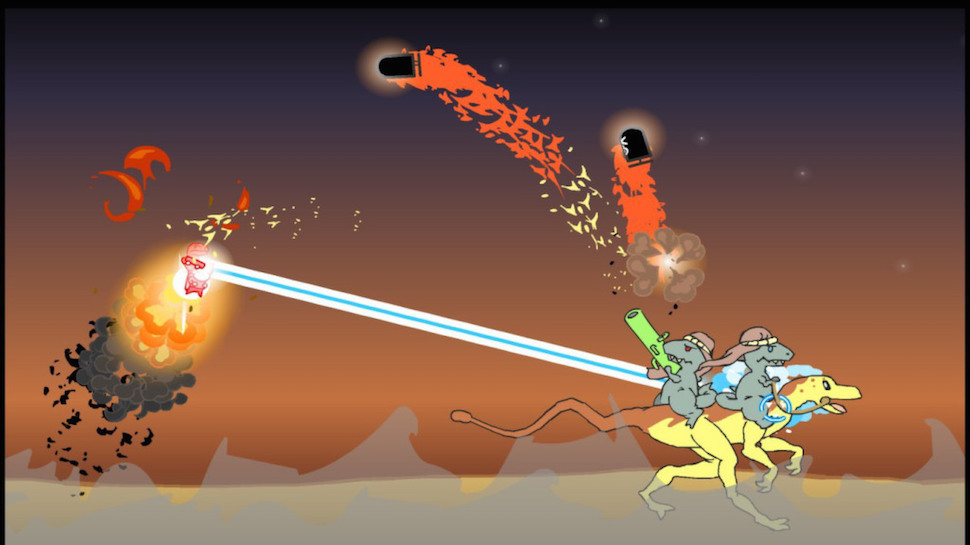 Then there are the obstacles that either need to be avoided (like spike walls and floors) or taken advantage of (lasers that act as transports and booster pads) in order to get you to your goal. It may take a few tries to get through a stage using this (you will die often), but that’s part of the learning curve that No Time To Explain provides.

Eventually you’ll get to boss battles—including a bout with the limbed shark (really, don’t ask: it’s more twisted science than Sharknado)—and other foes. Beating them will open up a new plethora of stages to take on, along with various collectibles—mainly in the form of hats. Your character actually doesn’t look bad in a moosehead hat.

Better still, two additional characters are introduced, including a no-nonsense gunman who uses a shotgun to blast himself around (“DOIN’ IT!”) and a goof that launches himself off walls. Learning their techniques will come in quite handy when completing stages as well. Plus, you know, finding more of those precious hats.

With a cheap price tag and plenty of platforming skills to master, No Time To Explain differs from usual games in the genre, while bending sci-fi to a whole new level. Really, shark…where’d you get those limbs?

It’s available now for PC and Xbox One, and coming to other platforms soon.