What Makes THE SANTA CLAUSE a Christmas Classic? - Nerdist

What Makes THE SANTA CLAUSE a Christmas Classic?

For many, the best part of Christmas is watching the same beloved holiday movies over and over again. In turn, we’re paying tribute to our favorites by breaking down everything that makes them annual must-watches, from our favorite characters and moments, to all the ways they celebrate the most wonderful time of the year. In this Classic Christmas Movie Breakdown, we’re looking at the unlikeliest Kris Kringle origin story ever, The Santa Clause.

There are lots of wholesome Christmas movies with unlikely premises that rank among our favorites. It’s A Wonderful Life is about a father committing suicide on Christmas Eve. Rudolph is what happens when you mix egg nog, clay, and LSD. However, only one revolves around the death of the North Pole’s most famous denizen and how the person who puts on the dead man’s pants forfeits all rights to his own life. Despite that seemingly dark concept, 1994’s The Santa Clause starring Tim Allen has endured as a classic holiday staple. It might start off strangely, but it’s combination of humor and tenderness, along with its idea that Santa is more than just one man, has connected with audiences of all ages across generations.

Santa’s “helpers” are everywhere, including in a police lineup on Christmas Eve, but yes, the real Santa shows up!

AND THEN HE DIES. SANTA CLAUS FALLS OFF A ROOF AND DIES.

This beloved holiday movie revolves around Santa dying and then some random jerk putting on his suit and becoming the new Santa. All against his own will. It’s really a timeless story of death and…forced servitude? And yet it all makes perfect sense. It really, somehow, against all odds, works.

Elves that are over 1,200 years old definitely count. And while Comet the reindeer can’t speak, he’s capable of understanding and communicating via nods, grunts, and growls in a highly advanced manner.

Tim Allen’s Scott Calvin is fun to spend time with, but he’s not a good dad, and he’s kind of rude. If he wasn’t so damn funny we’d probably hate him. Eventually he grows into the role (literally and figuratively). But even after he embraces the fact he’s Santa Claus he kidnaps Charlie and takes him to the North Pole for a month. Charlie’s mom is a good person who didn’t deserve that.

Charlie is….fine. He’s a nice kid, but a little whiny considering his dad is literally Santa and he got to visit the North Pole. 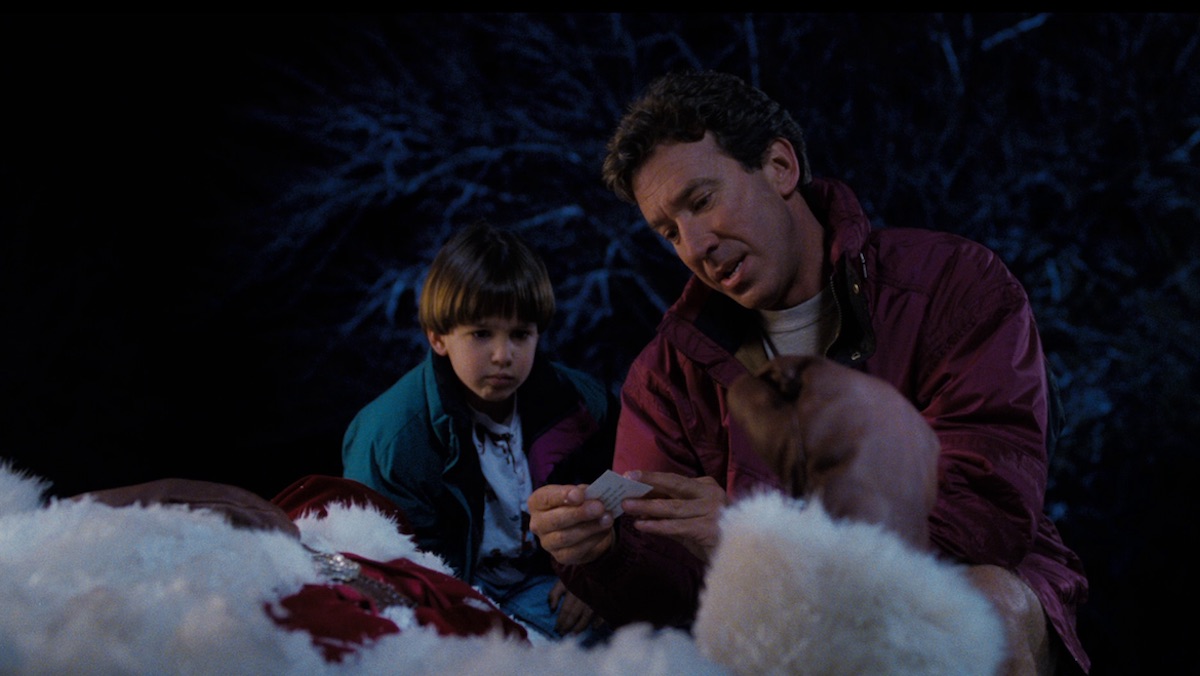 There’s no real villain. Judge Reinhold’s Neil is a dink who wears ugly sweaters but means well. He actually offers to help Scott throughout the film and always has Charlie’s best wishes in heart. It’s not Neil’s fault he kinda sucks. Well, it’s kind of his fault, but it doesn’t make him a bad guy.

The movie is sweet without being saccharine, especially about the central ideas of Christmas. It’s a magical time of the year, when families come together and we spread joy to one another. And all of it is connected by Santa. Neil and his lack of imagination were made cynical about the holiday at only three-years-old, but that makes his moment of wonder at the end when he finally gets his Weenie Whistle that much better.

The only singing comes from some carolers who are performing “Carol of the Bells” on a street. There is a funny musical moment at the North Pole though. Head elf Bernard tells Scott he has to check “the list” twice, and when Scott doesn’t know what that means, Bernard whispers the lyrics, “He’s making a list,” to which Charlie yells, “He’s checking it twice.” Then every elf in Santa’s workshop sings “Gonna find out who’s naughty or nice.”

(Side note: Bernard is the best.) 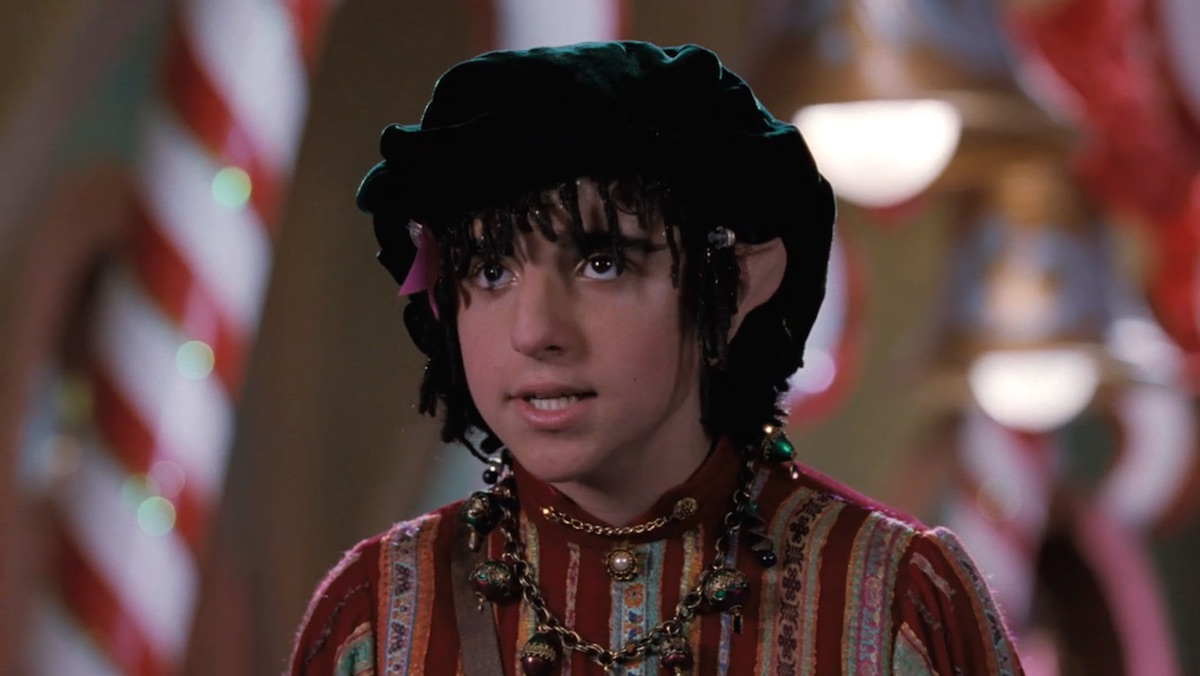 Family, giving, imagination, and believing in something greater than yourself.

Scott, a selfish person, is thrust into this role as Santa, a role he initially fights. Eventually though he realizes Santa is more important to the world than Scott Calvin, so he accepts his duty in bringing joy to others. Neil and Wendy aren’t just skeptical about a seemingly insane Scott and a delusional Charlie; they have lost both their Christmas spirit and their ability to use their imaginations. They don’t see the value in Charlie believing in Santa. The world is too rigid for such silliness. But that sense of wonder makes life more fun. 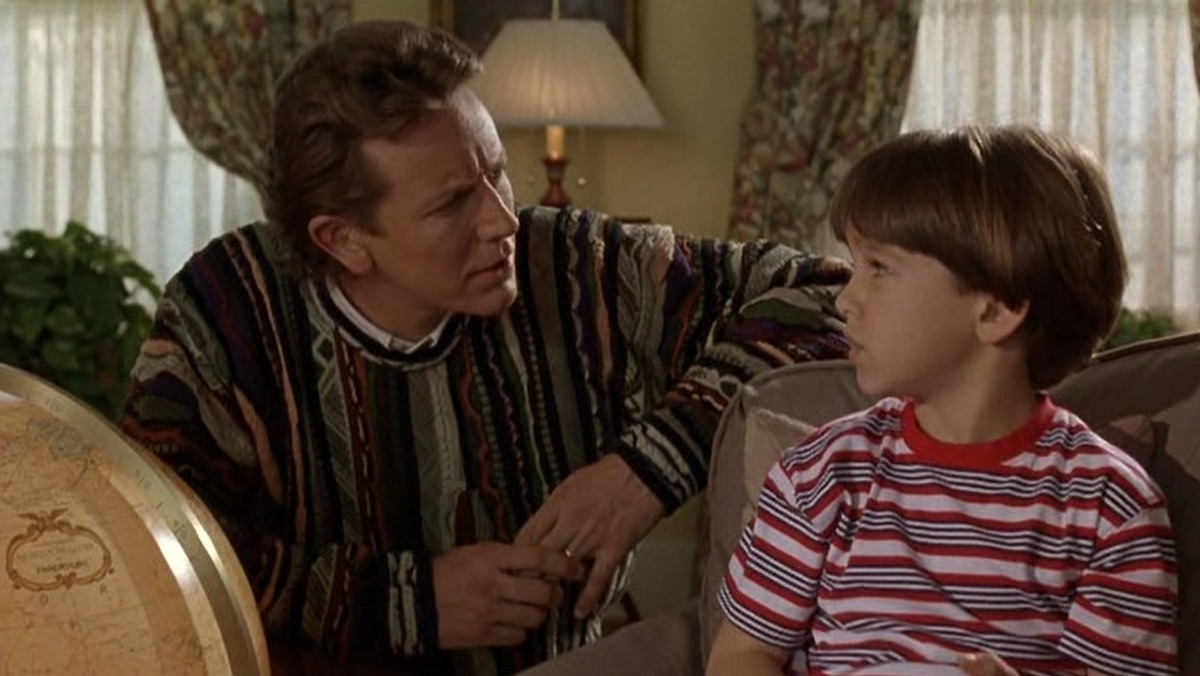 It comes from a moment that could also be the best scene. After finishing his first night as Santa, Scott is in his new red silk pajamas when Judy the Elf, who looks like a nine-year-old, brings him her hot cocoa. She says it took her over 1,200 years to perfect. Scott jokingly says, “You know, you look pretty good for your age.”

A super serious Judy responds, “Thanks, but I’m seeing someone in wrapping.”

You can’t go wrong with Santa Claus dying (that was weird to type) or Charlie explaining to a skeptical Neil how Santa Clause could be real. But the funniest, best single moment in the movie comes when Scott delivers toys on his first night and a little girl wakes up. She wants to know why he’s skinny, doesn’t have a beard, and won’t drink the milk. It’s genuinely funny, and it also leads to an amazing, touching payoff the following Christmas when she leaves out soy milk for the “lactose intolerant” Santa.

After Wendy and Neil realize Scott really is Santa, as the police and neighborhood surround the house, Scott takes off on his sleigh to the wonderment of all. (Including some of his elves hiding as children). From his sleigh he drops down a soccer ball to Charlie, a Weenie Whistle to Neil, and a Mystery Date game to Wendy. It’s easy to get cynical about the commercialism of Christmas, but getting that one present as a kid can help restore your faith in the world. And while Scott Calvin might have become St. Nick because of a technicality, it shows he has truly become Santa Clause.

That’s why it’s a Christmas movie classic. Even if it did start with Santa dying, Santa can never really die.