We love tabletop games here at Geek & Sundry, and we love to showcase the best games out there. If you want to stay tuned into what’s new and exciting in the world of tabletop games, be sure to tune into Game the Game hosted by Becca Scott, with episodes going live that you can watch here at GeekandSundry.com.

Very rarely I’ll come across a game whose hook is joy laid so bare. There’s no foolin’ anyone – A Tale of Pirates is all about playing with a toy, one so damn cool and electrifying that Sgt. Slaughter would team up with Optimus Prime to burn it down. One look at the enormous 3D pirate ship at the center of the table and you clearly know what’s up, which admittedly you’d never get from the drab box cover.

The cardboard vessel sits dutifully atop a circular ocean board as you’re able to rotate its facing and maneuver about the wonderfully illustrated deck. Did I mention there’s even a crow’s nest at the top of the mast jutting up into the sky like a sword thrust into the clouds? The whole thing is wild and the antithesis of a drab board with a throng of cubes. 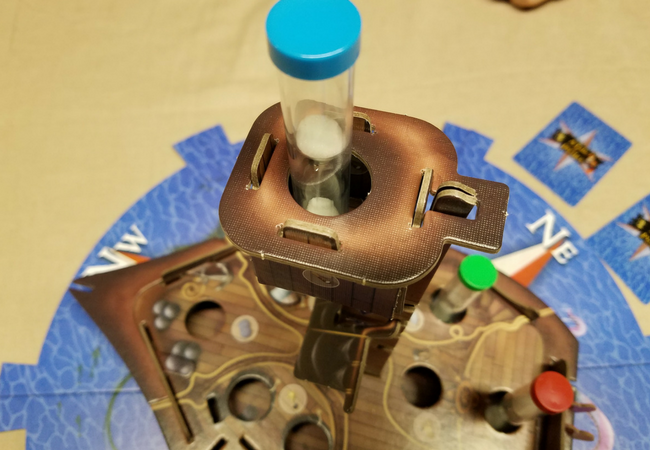 Once you fire up the attractive app and dive into the historical re-enactment of a pirate’s life – steer clear of the scurvy variant – you’re in for the second shock of your short buccaneer existence. This thing’s got game. You see, A Tale of Pirate’s is a toy, but it’s also a damn good game. With a concise body of mechanisms, this real-time design elicits tension and drama with just enough tactical meat to grind your teeth on.

Let’s tell a story. You’re a pirate now after all and stories are the only currency no one can steal from you and bury in forgotten dirt.

The sound of crashing waves and a squawking parrot struggle to rise above the din of grown individuals arguing with each other.

“Aaron, after you reload you need to drop the sails so we can turn faster”, I plead.

“We don’t need to turn, someone has to get up in the crow’s nest and spot that card to the South East so we don’t risk running into rocks”, Aaron fires back.

Ben interjects: “Dammit, I’ll go in the crow’s nest. Someone drop the sails or man the cannons.”

This is how your tale of skullduggery will likely go. As mentioned earlier, this is a real-time game where player’s fly about that fantastic cardboard ship and place their figures on stations to execute actions. By figures I don’t mean gloriously sculpted miniatures fit for a CMON Kickstarter stretch goal, no, here our pirates are molded of clear cylinders and guts stuffed with grains of sand from the finest Caribbean beach. Yes, you’re represented on the ship by a sand-timer. Don’t complain or I’ll flip you.

Seriously, this is excellent. To take an action you place your timer into a slot in the ship and then must wait 30 seconds for the sand pebbles to drop. Once the top half of your drunken sailor is empty, you can then complete the assignment – tasks such as loading cannons, firing them, scouting face-down cards in the crow’s nest, or increasing the speed of your ship.

All of this happens as the app is squawking at you and throwing out random events that will toss a wrench in your well-oiled machine of teamwork. It’s a frantic game but it’s one that picks up and slows down, like a coaster ascending a hill before a thrilling drop. You will have moments where everyone is waiting the half minute or so for their pirate to complete the action. If the difficulty of the scenario is not properly tuned (this is set by the group) or if merely you’re a quiet bunch of coconuts, boredom and a sense of unwanted calm will arise. These are the moments when A Tale of Pirates may start to lose you and your confidence may sway.

But for an appropriately engaged crew, you will likely be talking strategy and planning your next actions. As you work your way through the 10 scenarios the game will grow in complexity and even in physical appearance as you open up sealed packets with new components. Your ship will change and new mechanisms you didn’t even realize existed will appear out of thin air. This is very similar to the arc of the lauded Mechs vs. Minions where the design taps into the same emotional appeal of a legacy game, without fully crossing over into the challenges and restraints of that particular genre.

Since each scenario has a unique set of goals augmented by new cards, tokens, and props, the game does a fantastic job of keeping you on your toes. That sense of discovery and excitement in the evolving structure of play has you coming back for more and provides a large incentive to fully explore the design and all it has to offer.

By embarking on that legacy-esque journey of scenario progression it risks a finite lifespan. The trio of designers tackle this problem by attaching a scoring system with difficulty options to the mobile app. Once you’ve cut through all of the content discovery, there is still plenty of reason to break out the box, crank the difficulty up to hell, and sail into the maelstrom.

This is a simple and streamlined game that attaches complexity as the players grow in skill and comfort. It’s extremely intelligent in how it presents novel concepts that tie into the swashbuckling narrative while presenting scenarios that are technically challenging and story rich. A Tale of Pirates is simply wonderful.

Give us your best pirate board game suggestion in the comments! And don’t forget to check out into our tabletop show Game the Game hosted by Becca Scott airing weekly here on Geek & Sundry!

In addition to Geek & Sundry, Charlie Theel writes for Ars Technica, Tabletop Gaming, Miniature Market’s The Review Corner, and co-hosts the gaming podcast Ding & Dent. You can find him on Twitter @CharlieTheel.