This year, the Geek & Sundry editorial contributors have come together and collaborated to put together several curated lists of games. Whether you’re looking to pick one up for yourself or as a gift, these titles are some of the best the tabletop industry has to offer and we heartily recommend them.

The health of Dungeons & Dragons is often tied to the health of the tabletop RPG hobby. With a very successful edition out right now, the high tide of 5th edition is raising many other boats. D&D has its place on this list, of course, but I’m also happy to put some amazing games on this list for people who want to explore other games that came out this year in a variety of genres from dark fantasy to utopian sci-fi. Any one of these games would put a smile on my face if I got it as a present (if I didn’t have a copy already).

Blades In The Dark 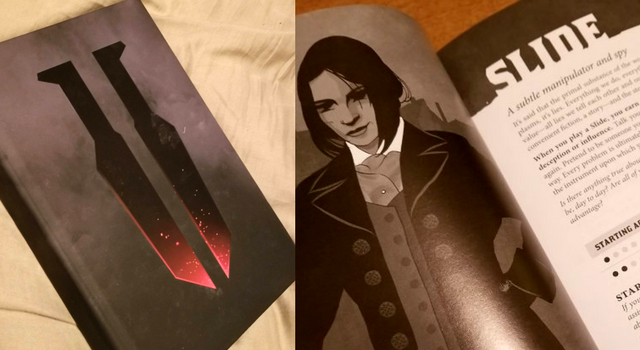 John Harper’s Blades in the Dark offers everyone a chance to pull off masterful heists in the gloomy industrial fantasy of Doksvol. Fans of Dishonoured, Fallen London and The Lies of Lock Lamora will see a lot to love hiding in the shadows of this game. The setting is evocative, with talk of ghost bottles and lighting rails powered by demon leviathan blood, and the mechanics cut heists down to sinewy, hungry bone. Players are encouraged to use resources to flashback in a scene to show how they planned for a complication ahead of time, rather than spend three hours planning a job that goes up in flames in the first five minutes. The GM also has plenty of resources to determine the consequences of the job as the various factions of the city react to the new crew on the street. 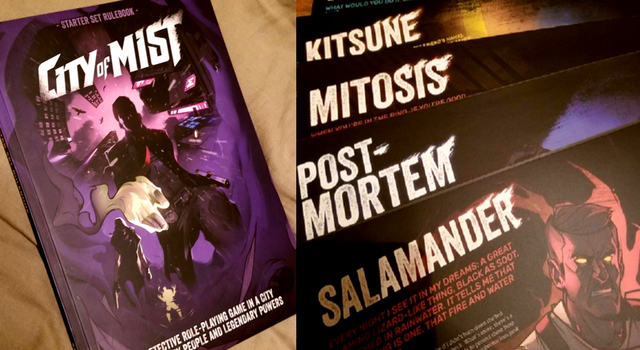 This game starts out with two familiar elements: an urban fantasy setting and a game Powered by the Apocalypse. It quickly diverges from those ideas by offering a setting that mixes mystery, magic and the mundane. Players are Rifts that are regular people somehow connected to a legendary power. They may be a schoolteacher or a hard-bitten cop, but somewhere inside exists the intelligence of Sherlock Holmes or power of Thor. The characters must explore their powers while also maintaining a link to their regular lives. Too much magic and they become an avatar forgetting their humanity completely. Too much mundane and the character goes back to sleep for a while, perhaps forever. This noir-tinged tale offers gorgeous artwork and a take on modern day monsters that let players write their own twist on mythology during play.

(Editor’s Note: The PDF is available now. Hard copies are scheduled for a January 2018 release.) 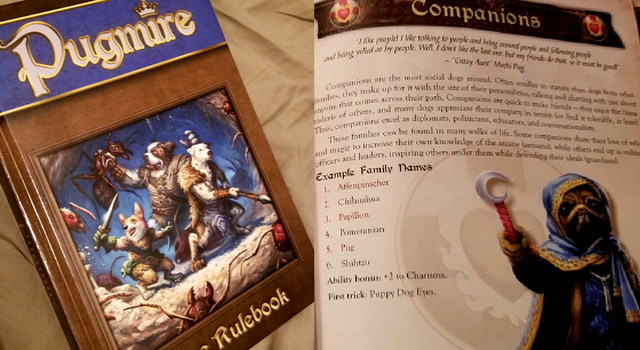 Eddy Webb’s elevator pitch of Pugmire as “Dungeons & Dragons with dogs” is punchy, but there’s so much more to the game. Webb walks a fine line between acknowledging how some players might find it funny to pretend to be a dog while earnestly setting up a solid fantasy world in the style of The Secret of NIMH and Redwall. Characters in Pugmire get up to the same things that adventurers do like swordfights and exploration, but they do it long after Man has disappeared without any obvious hints as to where humans may have gone. This game runs on a streamlined 5e engine, which makes it an excellent gift for someone already familiar with D&D looking to try something a little different, or for kids (and adults) who looooooooooooove their dogs.

If you want to get a feel for the game, check out our the Pugmire campaign played on ForeverVerse! 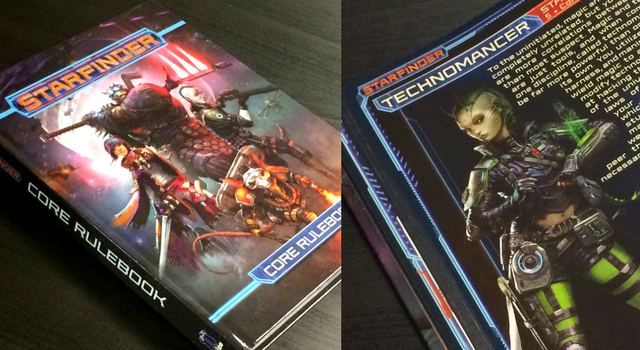 Mashing up science-fiction and fantasy in tabletop games has been around for a while, but Paizo found untold success this year in bringing goblins into space with the Starfinder core rulebook. The tome adjusted the sturdy Pathfinder rules to fit a wider galaxy and Paizo already has plenty of support in the pipeline, including adventure paths and map packs. Starfinder exists in a space (pun intended) with enough changes to entice new players while still being useful to long-time fans. In a year where Guardians of the Galaxy and Thor: Ragnarok are proving to be as popular as the next Star Wars movie, now might be the time to try some science fantasy at your tabletop. 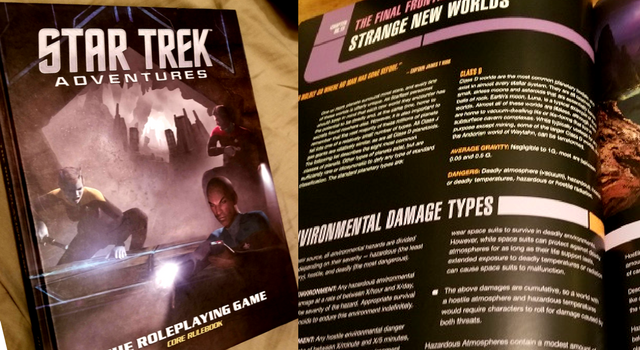 Speaking of giant sci-fi franchises returning, Star Trek returned very strongly thanks to the official prequel Star Trek: Discovery and the unofficial homage The Orville. My friends remain split on which show is the better heir to the crown, but they all agree that Star Trek Adventures offers a great licensed RPG. The game focuses on the Drives of characters rather than their strength or combat damage. Successful rolls let character gain momentum to use for when the chips are down and that warp core need to be back online, now, dammit. Modiphius also dropped jaws across the world with the massive Borg Cube Collectors Edition, which is now making its way to happy Trekkies around the galaxy. If you like Star Trek, this is one of the best ways to get aboard a Starfleet vessel to make your own adventures.

Looking to see the game in action? Join Shield of Tomorrow where a talented cast goes on weekly adventures using the system!

Tales From The Loop 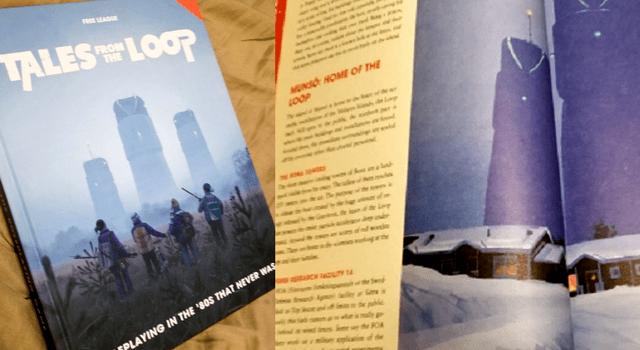 Last year, Stranger Things tore through the summer doldrums like a psychic bolt hurled by Eleven herself. It reawakened an interest in the “kids on bikes” genre of adventures. The Kickstarter for Tales from the Loop came out soon thereafter, promising a quick and easy way to have adventures that shifted from the unusual mysteries of a town located near a high-tech research facility to the mundane lives of kids in the 80s with ease. The book delivered all that and more, with a simple system, gorgeous art that grabs the imagination, and a mini-campaign in the book that’s become a hallmark of Free League’s excellent designs. 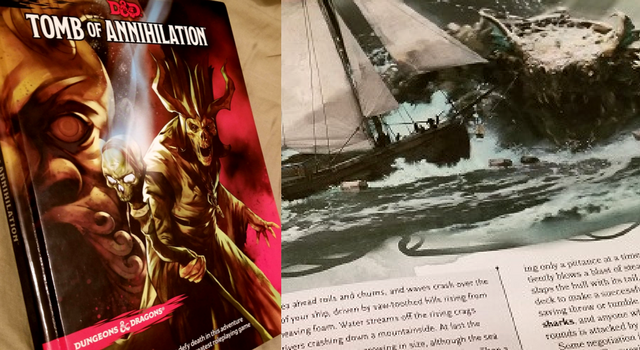 Dungeons & Dragons had a very strong start to 2017 thanks to this adventure. It offers a jungle trek searching for a lost temple, adding a dash of Indiana Jones and Jurassic Park in addition to the usual puzzles and battles. Any adventure that offers PCs a chance to be their hard-earned gold on dinosaur races is pretty dang awesome. This offers a deep dive into Skyrim style sandbox play, where the main quests, while important aren’t usually the ones generating memorable moments for the players. Players could get lost in Chult’s jungles and temples for months if they want to explore every last single, solitary place on the map.
You know it’s a big deal when Chris Perkins, D&D’s lead story designer and reknown DM says people are going to die, it’s a heck of an adventure.
Price: $50 — Wizards of the Coast

What RPGs will you be gifting your friends and yourself this year? Tell us in the comments!

If you love RPGs, be sure to tune into Geek & Sundry’s Twitch and Alpha where talented casts play RPG games on shows like Critical Role, ForeverVerse, and Shield of Tomorrow.

Editor’s note: copies of the games were provided by the publishers.