There’s all kinds of different games out there–4X, worker placement, auction, dice, and more. Perhaps least well known is the rondel game. A rondel is a wheel on the board that has various actions or abilities listed. On your turn, you move your marker clockwise around the wheel a number of spots and then take the associated action. The trick is, most actions are only on the wheel once and you can only go so far each turn. It forces you to carefully plan ahead. Most of rondel games have a nice tension between efficiently using actions, either by going slowly, or skipping ahead and avoiding some good spaces, but getting to what you want sooner.

Rondel games aren’t as ubiquitous as other genres, but you should absolutely check out a few of them and the unique experience they bring to boardgaming. Here are three great ones to get you started.

In Navegador, players sail from Portugal to various locations in the Old World and the Far East. Along the way, you’ll gather raw goods or refine them into products. You’ll construct your ship capacity and ensure you have enough workers before making a steady eastward press toward Japan.

This game has some amazing aspects to it. One of the best is its completely player-driven market. The market track shows how many raw goods are desired. The more players sell, the lower the price gets, but the higher the demand for refining capacity. Of course, as players refine those products, the refined goods decrease in price and the raw goods increase. Hitting the market at the right time can be critical to having a good turn.

The rondel is well integrated into the design. Of its eight spaces, two are Marketplace actions. So, unless you just went, you can always go to market. The rest, though, are all unique. If you want to expand your ship production, you can do so. But that might mean skipping ahead of other great actions like colonizing new territory. That strong tension makes a good game into something awesome. 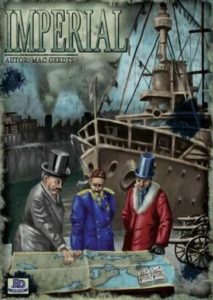 Imperial looks like a war game, bu it’s not. Players seem to be the kings of various countries, as they command the armed forces of Europe. They aren’t. You see, in Imperial the players aren’t the nations themselves or even their leaders. Instead, they are investors of a kind, “investing” in those countries and lending them money. If you’ve loaned the most money to a country, why you can basically tell it what to do. And the game reflects that. Still, your goal isn’t to wipe the other countries out. Instead, it’s to use aggression to supplement your personal wealth.

This game (and its sequel Imperial 2030) creates an interesting blend of war and economics. If you focus too much on fighting, someone might buy up more stock in your favorite country and you’ll lose control. But ignore conflicts, and your stock might devalue as other countries prosper.

Once again, the rondel takes an interesting game to a whole ‘nother level. You may want to pay out dividends, but doing so might cause you to miss a golden opportunity to attack a different power. Like all rondel games, Imperial forces hard and important choices on you. 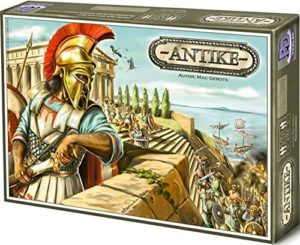 In this civilization game, players build armies, gather citizens, promote kings, or attract scholars. While you can attack your neighbor, the game isn’t about attacking. It’s about bringing notable individuals to your civilization and the first player to reach a predetermined number is the victor.

Antike has three main resources in the game: gold, iron, and marble. You use marble to build temples which help attract citizens, iron builds armies which will attract generals, and gold advances science which attracts scholars. But you can’t just specialize in one thing, the rondel won’t allow it.

This rondel is eight spaces long. Each building and its associated resource are on opposite ends. That means you can’t simply get iron, build armies, and repeat forever. Won’t work. You have to take at least one action in between each gather and build. This forces players to diversify and you end up with several well-rounded civilizations competing. In other words, it exalts strategy above gimmicky build orders.

Have you played rondel games before?  What’s your favorite?  Tell us about it in the comments.