When the anime import series Robotech premiered on March 4, 1985, it was a serious game changer for animation on American TV. Robotech was a combination of three distinct Japanese anime series produced by the same production company: Macross, Southern Cross, and Genesis Climber MOSPEADA. Since all three shows involved humans fending off alien invasions with transforming robots, producers Harmony Gold combined them into one multi-generational story. This enraged certain purists, who saw Robotech as a bastardization of totally separate series.

But even the naysayers have to admit, Robotech’s instant popularity greatly helped more serious anime enter Western mainstream media. And in hindsight, it did something even more revolutionary. It gave the world of weekday afternoon cartoons its first ever drag queen hero. ( Bugs Bunny doesn’t count, wiseguy). Lancer was this character’s male name, but his drag persona was a female superstar pop singer named Yellow Dancer. (Or Yellow Belmont in Japan.)

Somehow, in the homophobic climate of the ’80s, where you couldn’t find a (positive) gay character anywhere in media, a drag performer enjoyed a position on TV between G.I. Joe and Thundercats. Whether intentionally or not, Robotech introduced the concept of drag queens to a young audience. And for LGBTQ kids like me who were watching, it was like like a ray of rainbow sunshine in a very bigoted and hostile world.

The character of Lancer was a pilot in the Robotech Expeditionary Forces, and a freedom fighter. He joined a rebel group seeking to free Earth from the alien invaders called the Invid. But to go undetected by Invid forces and their human allies, he disguised himself as a woman. A woman he then catapulted into a pop music career as the flamboyant singer Yellow Dancer. Voice actor Cam Clarke gives Lancer his speaking voice, with singing vocals performed by Michael Bradley.

Lancer was introduced in episode 63 of Robotech, titled “ Lonely Soldier Boy.” This was also one of the names of Yellow Dancer ‘s songs, which she performed in that episode. This was actually the third episode of the Japanese anime series, Genesis Climber MOSPEADA. But in the reconfigured version for America, it fell towards the “third generation” of the Robotech saga. Thus, it appeared towards the end of the series’ run.

Part of what made Robotech so revolutionary was how it broke so many taboos for kids’ programming. Lancer was a kickass fighter while allowing himself to be feminine. It was simply unheard of for the time to see a character like this presented in a heroic light. More generally, unlike on shows like Transformers, main characters died on the regular. They showed that war is often ugly and brutal. It dealt with real characters with adult emotions and relationships. In fact, when interracial relationships were still taboo in live-action television, one of Robotech’s main couples was an African-American woman and a white male fighter pilot. So a heroic drag queen became just another way the show broke new ground.

So why is this such a big deal? Back in the ’80s, LGBTQ culture was practically nonexistent in the mainstream. If gay people did show up in a movie or TV series, they were the butt of a cruel joke. And there were no drag queens in mainstream culture. (RuPaul was still years away.) Or should we say, there were no drag queens who could say they were drag queens, even if they obviously were. Culture Club was one of the biggest pop groups of the early ‘80s, and their lead singer Boy George was clearly in drag. But he couldn’t say it out loud.

When Culture Club won a Grammy in 1984, as part of his acceptance speech, Boy George said, “Thank you America; you know a good drag queen when you see one.” This offhand comment sent Americans into a tizzy, with people in the music business declaring Boy George’s career as “over.” It was one thing to be a man who wears makeup. Many macho rockers did that too. But “drag queen” was a specific reference to gay culture, and it was one step too far for Americans at the time. You could be gay; you just had to pretend you weren’t, and not talk about it.

So how on Earth, in this environment, did a drag queen end up on a weekday afternoon kids’ cartoon show? Admittedly, no one ever says the word “drag queen” aloud on Robotech. But the character of Yellow Dancer is a self-identified man dressing in women’s clothing to perform musical numbers. That’s a drag queen, folks. Somehow, this got past standards and practices. From what I can recall, there wasn’t much of an uproar from parents, or calls for Robotech’s cancelation. It somehow sneaked under the radar. 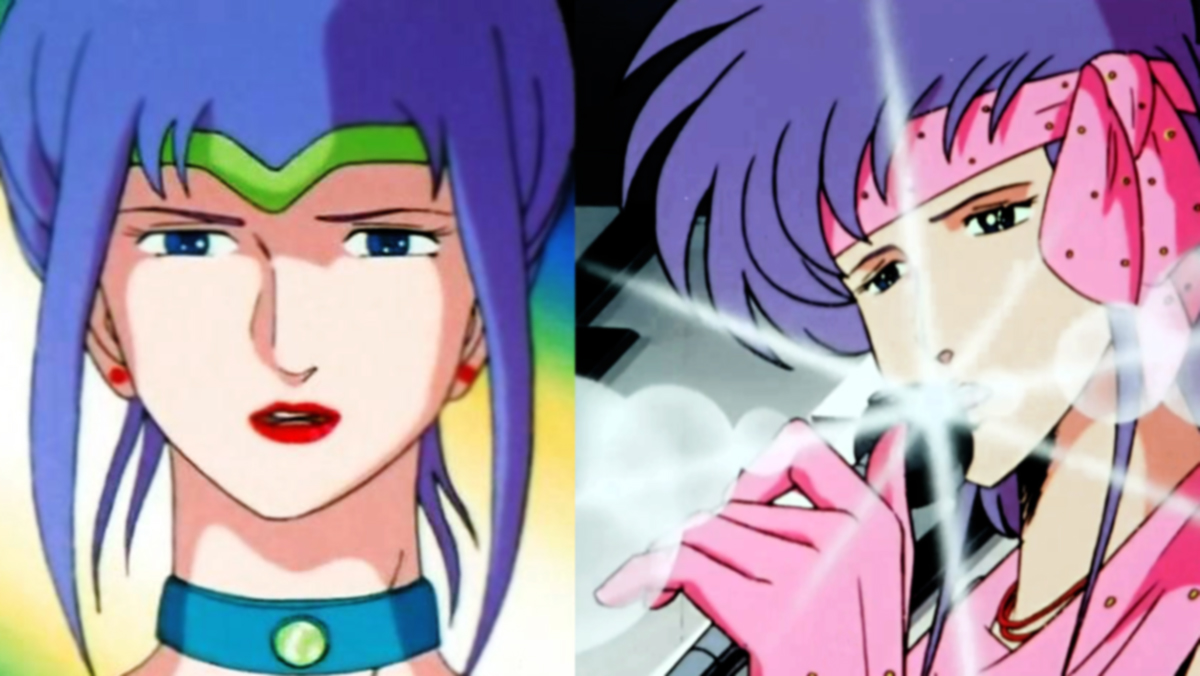 Of course, a big reason why there was little protest was simply that Lancer identified as straight onscreen. He had two female love interests on the series, Carla and the alien woman Cera. One of his girlfriends in fact put him in a female disguise first, to hide him from hostile forces. But then he took that identity and turned it into a performance career. But even though he was often feminine in his mannerisms on the show, he never showed any interest in men. So that made him “safe” for the consumption of American kids.

And let’s not forget, the show’s original birthplace was Japan. Therefore, all the animation was completed overseas years prior to airing in the US. By the time it sold to American audiences, there wasn’t much they could do to an already existing show. Beyond just dubbing it over. Robotech producers Harmony Gold probably just crossed their fingers and hoped it would all go over TV programming decision makers. And it did. 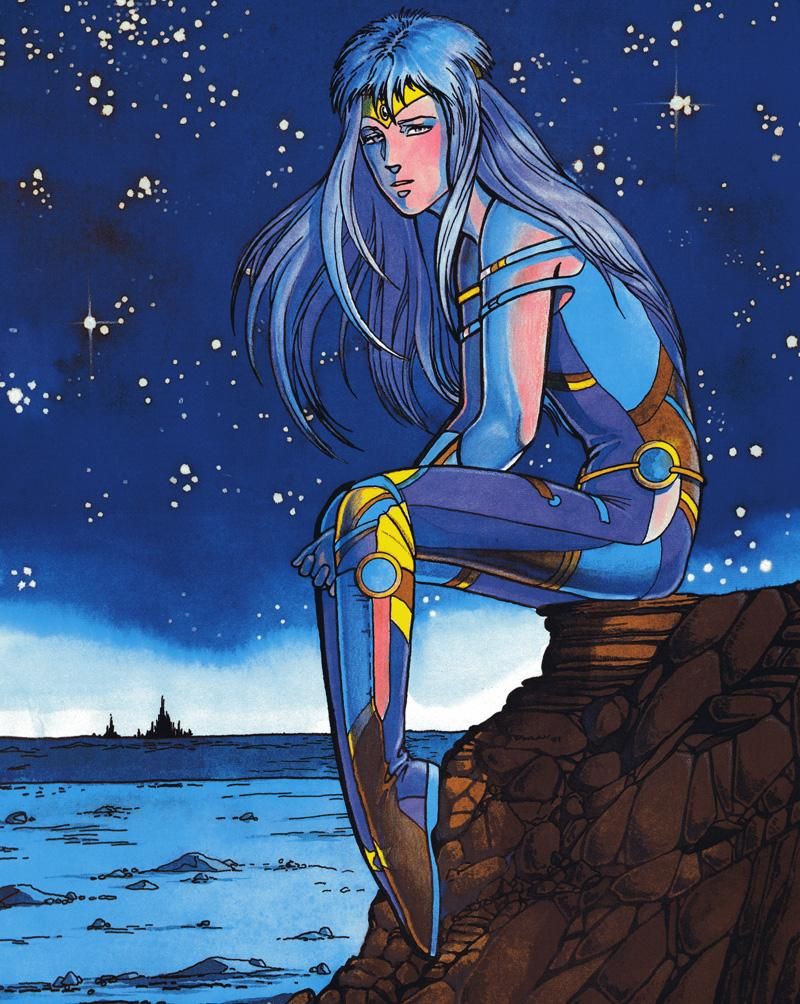 But as the years rolled on, Robotech found form in other media, and began hinting otherwise about Yellow Dancer. During the late ‘80s, the entire saga was adapted into novels by author Jack McKinney. (This was actually a pseudonym for Star Wars writers James Luceno and Brian Daley.) Portions of the novel dealing with Lancer emphasized a male friend of his with whom he was very, very close. These books were essentially YA novels, so broad hinting was all they could get away with. But they clearly saw Robotech‘s Lancer as a queer-coded character.

Today, Robotech would likely identify Lancer as a gay man in drag. Or probably even more likely, a trans character. Nevertheless, just being a drag queen on a series consumed by kids on a regular basis, back in an era where anti-LGBTQ discrimination was the norm, can’t be undersold. Whether Lancer/Yellow Dancer presented as gay or not, everyone watching could tell he was queer-coded. And to young queer kids starved of any representation on TV, seeing a feminine man as an action hero, who then dressed as a woman and performed as a pop star, was a revelation.

The final episode of Robotech saw Lancer dropping the Yellow Dancer act and revealing himself as a man to his loyal fans. On the one hand, it wasn’t great to see him brush aside his drag persona; but the fact that he could reveal himself as a man who did drag only to receive huge applause was a positive message to this kid. Years later, Lancer/Yellow Dancer is easily one of the most beloved aspects of this era of Robotech. In fact, the last official Robotech movie produced was an adaptation of the Lancer-centric anime movie Love, Live, Alive. You simply can’t keep a good drag queen down.