Rick and Morty, which aired its last new episode on December 15, isn’t making us wait forever for the second half of season four. We “only” have to wait five months, because the series returns May 3. That is honestly about as short of a delay as we could have hoped for, considering the two year hiatus after season three. And while we already got an exciting trailer for the upcoming five episodes, Adult Swim has now given us another way to obsess over the series before it comes back. The network released the titles for the upcoming episodes, and they sound like parodies of some of our favorite films and franchises.

Imagining episodes based on their name is almost as fun as watching episodes.
New #rickandmorty returns May 3 at 11:30pm on @adultswim. pic.twitter.com/xfo0pGtK4S

Oh, we will imagine what these episodes are about just based on the title. WE WILL.

“Never Ricking Morty” (5/3): Could this be a parody of The NeverEnding Story? If it is, might we see the return of Balthromaw the dragon from the first half of season four? We’re pretty sure that talking cat is coming back, and the two animals met at episode’s end.

“Promortyus” (5/10): A spoof of Ridley Scott’s Prometheus will have face huggers. “Get off my face broh.”

I just got word that the title of one of @RickandMorty’s new episodes is “Promortyus”.

The official logline: “Get off my face broh”.

You can watch new episodes of Rick and Morty once it premieres on Sunday May 3 at 11:30 PM on [adult swim]. Get hyped! pic.twitter.com/cCwIEsRhik

“The Vat of Acid Episode” (5/17): We have no idea if this episode will parody anything specifically, but it will have a vat of acid (as seen in the trailer). That much is clear. Definitely going to be some acid.

i just got a golden ticket, and it’s the unreleased title for an upcoming rick and morty episode:

official longline: the one with the acid vat, broh

“Childrick of Mort” (5/24): We’d be ALL IN for a Children of Men inspired episode, but we’re extra excited because (if Adult Swim’s retweets are to be believed) it will feature the entire Smith clan.

Time to get ready for some rick and morty! Starting May 3rd! 😝#rickAndMorty

Childrick of Mort
Official logline: Miracle of life broh. Whole family in this one broh pic.twitter.com/GtVfqxNScF

“Star Mort Rickturn of the Jerri” (5/31): ….We are at a total loss on this one. Doesn’t ring any movie bells for us. Guess we’ll just have to wait and see what Episode X offers.

Rick and Morty themselves have entrusted me with some exclusive info: one of the new episodes of @RickandMorty S4 Part 2 is titled "Star Mort Rickturn of the Jerri"!

The official logline: "Parenting is crazy broh. Stuff straight disappearin in this one"

[this is real i swear]

One thing that’s not clear is which episode Evil Morty could appear in. The trailer seemed to indicate he amassed an army at the Citadel of Ricks. But it’s not obvious which installment we will see that in. Our best guess is it would be the season finale. A Return of the Jedi parody should include a big showdown with an evil emperor. 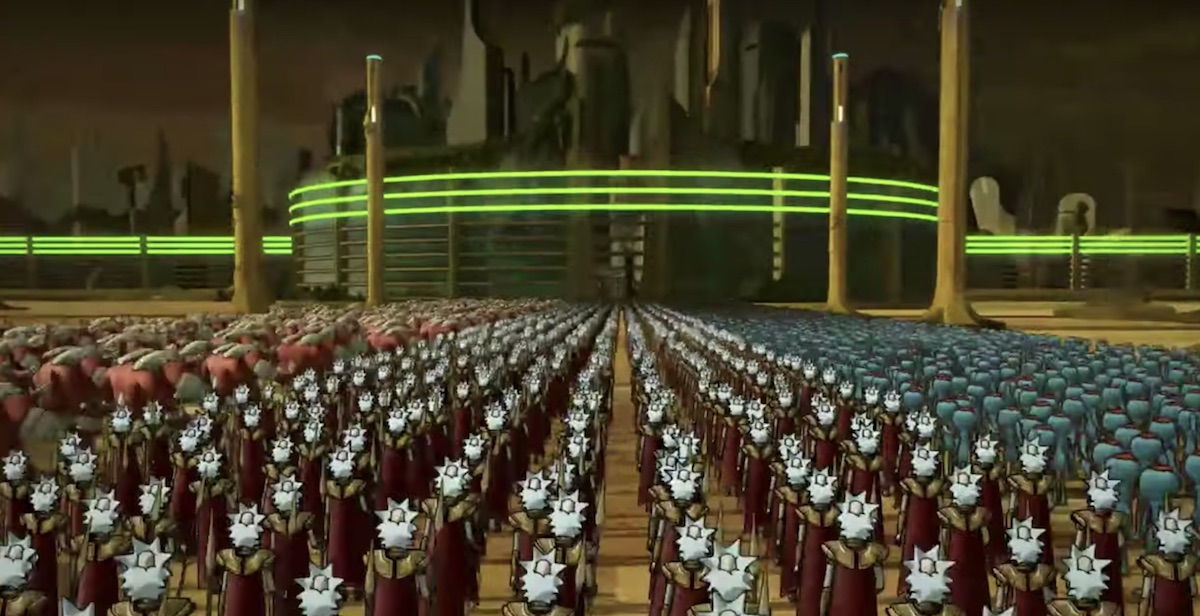 These might just be titles, but even just knowing them is pretty exciting. You can’t have an official episode title without an episode being done. And we weren’t sure if that would be true for another year or two.