The Borg Have Arrived in 'Star Trek: Ascendancy': Our Hands-On Overview - Nerdist

The Borg Have Arrived in ‘Star Trek: Ascendancy’: Our Hands-On Overview

We love tabletop games here at Geek & Sundry, and we love to showcase the best games out there. If you want to stay tuned into what’s new and exciting in world of tabletop games, be sure to tune into Game the Game hosted by Becca Scott every Wednesday starting at 4 PM PT on Twitch and Alpha.

The Borg Assimilation is the hotly anticipated expansion to one of the best board games of 2016–Star Trek: Ascendancy, a game we think every Star Trek and tabletop fan would absolutely enjoy. This is the third faction extension, following up the stellar Ferengi and Cardassian offerings which arrived earlier this year. Unlike those previous two additions, the Borg completely changes the tone of play.

This new entity is not fielded by any specific player; instead, they are encountered as an AI controlled enemy faction. The goals of the participants don’t shift–you still need five Ascendancy tokens for victory–but the obstacle course to get there radically does. This isn’t just another set of asymmetrical abilities to tinker with or some slick plastic minis to fondle; this is a terrifying invasion that threatens to derail the galaxy.

These iconic cyborg dudes want to swallow your people whole and learn as much as possible. They’re kind of the techno-librarian version of Michael Myers (that’d be the maniacal serial killer, not the comedic Canadian), and they won’t sleep until you’ve wept.

This expansion offers two modes of play. The simplest version is shuffling the Borg exploration cards and system discs into your pre-existing stacks. You’re guaranteed not to encounter them in the first few draws, but a turn or two in and all bets are off. One minute you’re exploding through the outer atmosphere of Kronos assembling your juggernaut fleet, and the next you’re stumbling into those huge black ice cubes that want to melt your brain. The fear is real as you have to pivot completely and wear out the klaxons while on constant red alert. 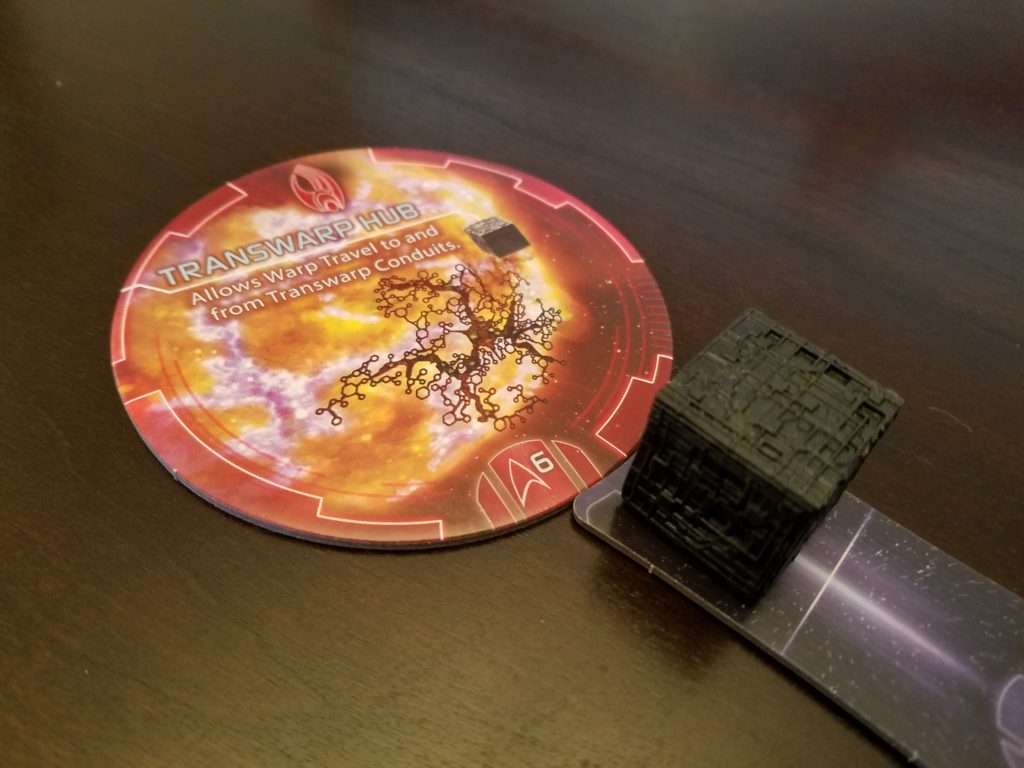 The second way to get your teeth kicked in is to start play with a special Transwarp Hub at the center of the table. This system spits out Borg cubes based on a die roll each turn. That means immediate pressure as the evil empire is coming and you must prepare. If you thought running into a lone cube off the orbit of Capella was rough, you better bring your Federation-issued diapers.

I’m spending a great deal of digital ink harping on the dread of the Borg. This is simply because the inherent difficulty level of this new challenge is very high. Your first few plays will see you likely floundering, getting devoured by the timeless entity and joining their ranks. Yes, if the Borg assimilates your feeble soul you get to start controlling them. Cards you draw from a deck determine how you move the cubes, but you’ll have a say on the order they activate which can have a substantial effect on the round. If additional players join the cyber-goth legion then the Borg will receive multiple turns. It can feel downright inevitable that your downfall is coming and that can be delicious in the right frame of mind, particularly if you’re a Trekkie with equal parts dread and respect for those hailing from the Delta Quadrant.

Beginning with the Hub in play is a more difficult endeavor for sure. They’ll make a b-line for developed worlds right out of the gate and begin carving up the galaxy in their name. You’ll need to employ stalling tactics such as clogging space lanes with errant ships and sacrificing souls to the machine. There’s a sneaky layer of depth at play interacting with turn order and the bidding process, as the Borg will aim at the player acting first in the round if they have no other valid target.

Eventually, they will invade and take planets over, replacing your nodes with their spires. This creates a compounding engine as additional cubes are birthed and the tide of war turns against the good guys. 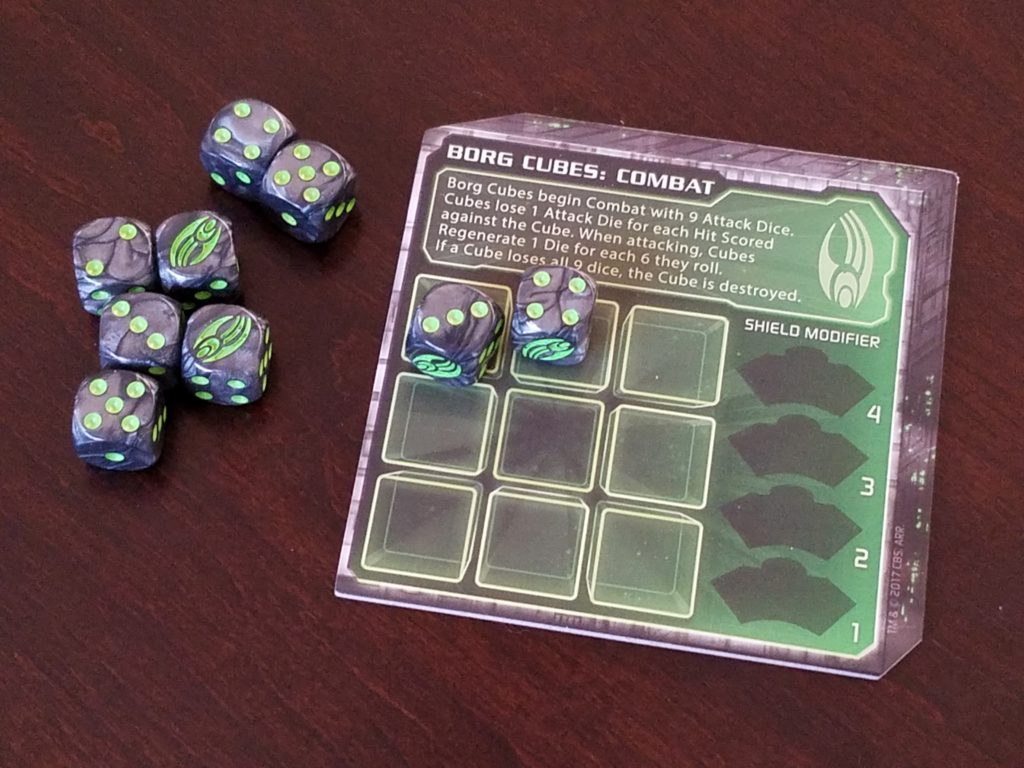 In combat, a cube will roll nine(!) dice ignoring your shields. The damage it sustains comes out of its dice pool, but it heals in subsequent rounds if it rolls sixes. Additionally, it gains a point of shield each round making your attacks less likely to hit. Yeah, pick your jaw up off the floor.

You need to hit these guys fast and hard to have any chance.

The one weapon players really have against the Borg is ganking their technology. If you can defeat a cube in combat, which is no small endeavor, you draw from a special advancement deck. These cards tend to give you powerful boosts when fighting the cybernetic invaders and many of them are researched immediately with zero cost. Making a desperate last stand and thrashing a cube to be rewarded with a stellar piece of alien-ware? Totally satisfying.

Overall this is an extremely compelling expansion that alters the feel of Ascendancy substantially. Players will need to form temporary alliances when this new enemy comes out or they will not last long. Allowing your neighbor to be assimilated will only boost the Borg. Tomorrow they won’t be eating Klingon leftovers, instead, they’ll be coming for your Romulan fleets. That alone shapes the dynamics at play and takes the game away from this sprawling epic space opera to almost a horrific game of interstellar survival.

I appreciate that the difficulty level is high, as it engenders deserved respect to these iconic villains. However, it’s slightly unfortunate that it’s almost necessary to use the base game option of increased starting resources. Foregoing this variant and taking on the Hub can prove nigh impossible and you risk turning a group of players off the expansion immediately. This is not an environment where you can just toss your players into the fire, it’s a more thoughtful and risky experience than previous encounters.

There are times when the mindless onslaught can simply feel unfair and sadistic. Random factors such as attaining longer space lanes edging you closer to the Hub or receiving an unlucky exploration card can set you back while your neighbors prosper. It requires a certain mindset and care-free optimistic attitude to swallow. It helps that controlling the Borg, while not strategically deep, is ultimately fascinating in a devious sort of way.

There’s an additional layer of difficulty as well in untangling the rules of these nebulous beings. Cards may reference moving the closest cube to the just-explored system but there’s no real guidance for determining distance particularly when no cube is connected by space lane. There’s a few quirky hurdles here that you will run into and will have to ad-hoc rule on to square yourselves away. This is not troubling enough to derail the experience, but it can provide a hiccup.

Proclaiming “resistance is futile” to the rest of the table is fun. Assimilating others is a special kind of joy, one that ardently begets technological growth. Having Borg cubes stomp down space lanes and wreck your peaceful Federation colonies is not fun, however. Well, that’s not exactly true. It is surprisingly fun, but it’s not really healthy. You don’t win any awards for getting smashed by alien craft shaped like a warped die that fell out of a burnt monopoly box. But you must comply.

Ultimately this is not one of those expansions you will always include. It’s exceptional as a tool to reconstitute play and provide new experiences, but it also heads in a direction that may aggravate some participants. The tempo is completely altered and you have much less time to unwind the tendrils of your empire and push advancements. This is more a thriller with your heart placed firmly in throat as opposed to a methodical display of imperialism with gradual cultural evolution. I’m not quite sure I’m in love with the change of pace, but I absolutely am enthralled.

Have you played Star Trek: Ascendancy? Let us know in the comments! Don’t forget to check out into our tabletop show Game the Game hosted by Becca Scott as we play games and talk about what’s happening in the land of tabletop gaming on Twitch and Alpha every Wednesday starting at 4 PM PT.

Want more board and card games?