Ranking Every Kiss in the STAR WARS Movies

Star Wars is all at once a space opera, a sci-fi adventure, and a generational epic filled with amazing relationships and, most importantly, romances.

Several love stories play out in the saga, filled with passion, angst, class differences, and everything else that drives people into each other’s arms. Solo: A Star Wars Story is now in theaters and FULL of smooching, and has cemented its legacy by having the most kisses in a Star Wars film. In honor of this historic feat, we’re counting down the best smooches in Star Wars film history. Finn and Rose share a chaste, brief kiss during the Battle of Crait at the end of The Last Jedi. Although the pair flirt lightly through their adventure to Canto Bight and beyond, we didn’t get much heat from their kiss. However, the smooch did push their relationship towards the romantic, and their bond could incite a sort of love triangle in Episode IX with Finn, Rey, and Rose. So we’re definitely looking forward to that potential drama. One of the most tender and sibling-appropriate moments happens in the form of a forehead kiss given by Luke to Leia before Luke’s sacrifice on Crait. This scene also brings the added weight of Carrie Fisher’s own passing, and is so sweet and poignant. Touchingly, Mark Hamill improvised the kiss, and we are definitely pro-kiss in this instance.

16. Padmé and Anakin, “A happy moment,” Revenge of the Sith

Padmé and Anakin steal a quick smooch when Padmé tells Anakin she’s pregnant. The kiss is quick and in secret, which gets points (secret kisses are always a little extra special). Plus, it’s in reaction to the pregnancy news that will set up the Original Trilogy, and ultimately doom Padmé, so it’s bittersweet.

Before Rey departs for Ach-To, she confesses to an unconscious Finn that she believes they will see each other again. She bends down to give him a slow, gentle kiss on the forehead, and unfortunately does NOT kiss him when they reunite on Crait at the end of The Last Jedi. This forehead kiss was all setup, with no payoff, justifying its low ranking on the list. However, it’s platonic enough that the door remains open for Reylo to become canon. But more on that later.

Although we don’t know much about Val and Beckett’s love story, the few moments we get with them together are an incredible encapsulation of emotion, fierce respect, and fun—and it’s all shown through some pretty solid, albeit brief, smooching.

Seeing Lando in Solo: A Star Wars Story definitely solidifies him as the smoothest man in the galaxy, and he pulls a total power move when Han and Leia land on Cloud City: he kisses Leia’s hand and attempts to shoot his shot with her. She’s already kissed Han by this point in the film, but it’s a sexy, experienced play by the other scoundrel who owned the Falcon.

One of the most infamous scenes in the prequels also has a pretty sneaky romantic kiss. Anakin starts to admit his full feelings for Padmé, which she is not on board for. They’re staring off at the beautiful lake and Naboo landscape, Anakin goes in for a kiss. It’s a bold move at the start of their forbidden romance, which is just beginning to escalate.

This kiss reads as a supportive move from Leia to Luke. And this is before Luke and Leia know they’re related, so it’s completely appropriate and above board for two siblings. It’s a fun little button before Luke swings them across the bridge, but is slightly romantic in the context of the action. I like it.

10. Padmé and Anakin, secret wedding kiss, Attack of the Clones As poorly scripted as Anakin and Padmé’s romance was, they had an incredible secret wedding at the end of Attack of the Clones. The sunset kiss seals their marriage, as Padmé takes Anakin’s newly robotic hand while C-3PO and R2-D2 look on. We know this marriage is doomed, which makes the kiss all the more romantic and tragic. Han gets a victory kiss in after finding out Luke is no longer a romantic competitor for Leia’s emotions, and in all honesty, it’s a weird time for a kiss. But it is a kiss in a Star Wars movie, so I really can’t complain.

8. Han and Q’ira’s first kiss of the film, Solo: A Star Wars Story

Solo basically opens with a full on make-out sesh between teen Han and Q’ira, and I am here for it. These kisses are fun, silly, energetic, and full of life. It’s good character introductions to both of these Corellian kids!

7.  Han and Leia, “Someone who loves you,” Return of the Jedi

Am I the only one worried about Han’s stinky breath after being frozen in carbonite for so long? Regardless, this reunion kiss between Han and Leia is everything it should be. The attempted rescue/kiss also briefly subverts the damsel-in-distress trope for one shining moment… before Leia is imprisoned in a metal bikini.

6. Luke and Leia, on the mouth, Empire Strikes Back

In a story about intergalactic warfare, swashbuckling aliens, and space wizards, this is potentially the most outrageous moment in all of Star Wars. In an effort to make Han jealous, Leia plants one right on a still-healing Luke on Hoth. They don’t know they’re brother and sister yet, and it’s a moment that will live in Star Wars infamy. Whenever you rewatch the films, this scene reads as super gross. But it’s still pretty funny that the best Star Wars film has just a hint of incest.

5. Han and Q’ira, in the Falcon cape closet, Solo: A Star Wars Story

The romantic tension was building between former friends and lovers Han and Q’ira from the minute they saw each other in Dryden Vos’s party yacht. But this kiss in Lando’s cape closet, which foreshadows another major kiss on this list, could have devolved into something more had Beckett not interrupted things. Multiple walls were involved, handsy fumbling, and romantic giddiness all make this emotional, intense smooch session the greatest in recent Star Wars memory.

4. Padmé and Anakin, about to die in the arena, Attack of the Clones

Padmé and Anakin had agreed to ignore the growing feelings they had for each other, and to try and stifle their forbidden love. That all changes when they get captured on Geonosis and are about to be taken to their deaths in a big gladiator pit. Padmé is the one who initiates this conversation, saying how she “truly, deeply” loves Anakin. He rebukes her and reminds her of the decision they made to not fall in love—“that it would destroy us.”

Padmé delivers this killer blow: “I think our lives are about to be destroyed anyways.” They lean in for a kiss, perfectly backlit by the sun of the arena, as their love theme, “Across the Stars” plays. Holy cow, “Across the Stars” is so good. That track is far too epic for the nature of Anakin and Padmé’s actual relationship, but the combination of that part of the score, the sexy lighting, and the potential “last kiss before we die” trope all contribute to this kiss’s perfection.

3. Han and Leia, “I Love You/I Know,” Empire Strikes Back Iconic. Passionate. Life-or-death. What is there left to say about this kiss? There’s a reason this entire scene goes down in history as one of the most romantic in all of Star Wars, and the kiss is part of it. Han and Leia are pulled apart from sharing one last kiss before Han gets frozen in carbonite, and it’s the kind of frantic, sad, intense kiss we haven’t seen since in Star Wars.

2.  Han and Leia, first kiss on the Falcon, Empire Strikes Back Although “I love you/I know” is the most romantic scene in Star Wars, the best kiss has to be Han and Leia’s first kiss on the Millennium Falcon. In a tight nook, some flirty banter kicks things off between Han and Leia, which moves on to tender hand touching, which finally culminates with a steamy smooch that’s been brewing for the entire film, ever since Han and Leia shared an intense glance on Hoth before Han attempts to leave. The whole set-up and payoff of the kiss demonstrates the chemistry and bond Han and Leia have, and why they are the most epic couple in Star Wars. Plus, Han’s in his best jacket of the trilogy, making him extra suave and sexy in this scene.

1. Rey and Ben, the kiss in between dying, The Rise of Skywalker 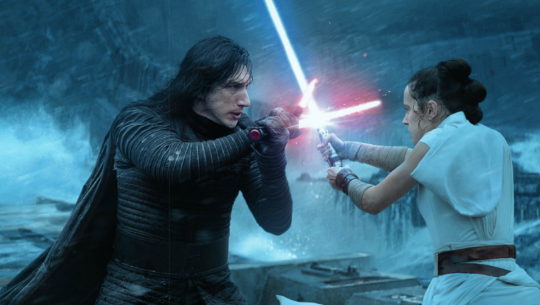 To quote the iconic Janine Melnitz from Ghostbusters: WE GOT ONE!!!!

After three movies of simmering sexual tension, begrudging attraction, and lots of lingering gazes, Rey and Ben Solo, formerly known as Kylo Ren, kissed on the mouth. Super hard. For a while. Here’s the setup, for those who need a quick reminder of the context of the kiss:

After teaming up to take down the revived Emperor Palpatine, Rey and Ben are completely drained of life, literally. Ben gets thrown off a cliff (“Ow”) into a pit, and Rey uses both Skywalker sabers to bounce Sheev’s force lightning back into him, disintegrating him for good this time.

Both of them take a little bit of a nap, and Rey seems to fully die from all of that effort. Ben Solo climbs out of the pit and stumbles to Rey’s side, hugs her tightly, and Force heals her like she did for him on the Death Star II remains. Rey wakes up, grabs Ben’s hand, they stare at each other for what feels like an hour. Holding each other’s faces, Rey says, “Ben,” and then… they smooch! Rey goes in for it, Ben responds. It is a long and glorious kiss. Rey smiles, Ben smiles, and then, Ben dies. It is brutal.

But, they’re a Force dyad, and they got their space kiss! They are equals in the Force and the only ones that really knew each other! After seeing these two talk across the Force and stare at each other in person for the better part of two movies, the kiss was truly the release we deserve. I really didn’t think we were going to get it! But we did, and it was magical.

Reylo is a divisive ‘ship, and I get that. But this is clearly the best kiss in all of Star Wars.

We haven’t gotten an on-the-lips kiss in the Star Wars sequels at all, which is a crime. Of all the ‘ships out there, Rey and Kylo is full of the most raw emotion, fueled by both shared abandonment issues, equal Force power, and beautiful faces. Rey and Kylo Ren touching hands across the galaxy in slow motion, after proclaiming the other is not alone, is the sexiest Star Wars scene in the Disney films. Just kiss already, you cowards!

KISSES WE WANT TO SEE:

Cassian and Jyn, Chirrut and Baze, Lando and L3, Kylo and Rey, Poe and Finn, Poe and Zorii!

So there you have it: the definitive ranking of kisses in Star Wars. Here’s to many more kisses in future films because there definitely needs to be more kissing in a galaxy far, far away. And no pressure, J.J. Abrams, but it’s your move for Episode IX to top Ron Howard’s number of kisses in Solo: A Star Wars Story.