It’s often said that the secret weapon of a story lies within the supporting characters. Sure, we become invested in a piece for its main characters and their stories. But there’s something special about a secondary character with equally strong writing and depth. With the right direction, writing, and actor, a strong secondary character can be what separates a good show from a great show. This is certainly the case with Queen Maeve (Dominique McElligott) from Amazon’s The Boys.

The Emmy-nominated superhero satire poses an intriguing question: What would the world be like if superheroes existed? In this case, the answer is abuse their powers. One of the heroes is Queen Maeve, the strongest woman in the world and longtime member of The Seven, a group of superheroes owned by the company Vought. The majority of the show’s narrative focuses on Hughie (Jack Quaid), Butcher (Karl Urban), and Homelander (Anthony Starr), yet Maeve’s placement and internal journey doesn’t go under the radar. 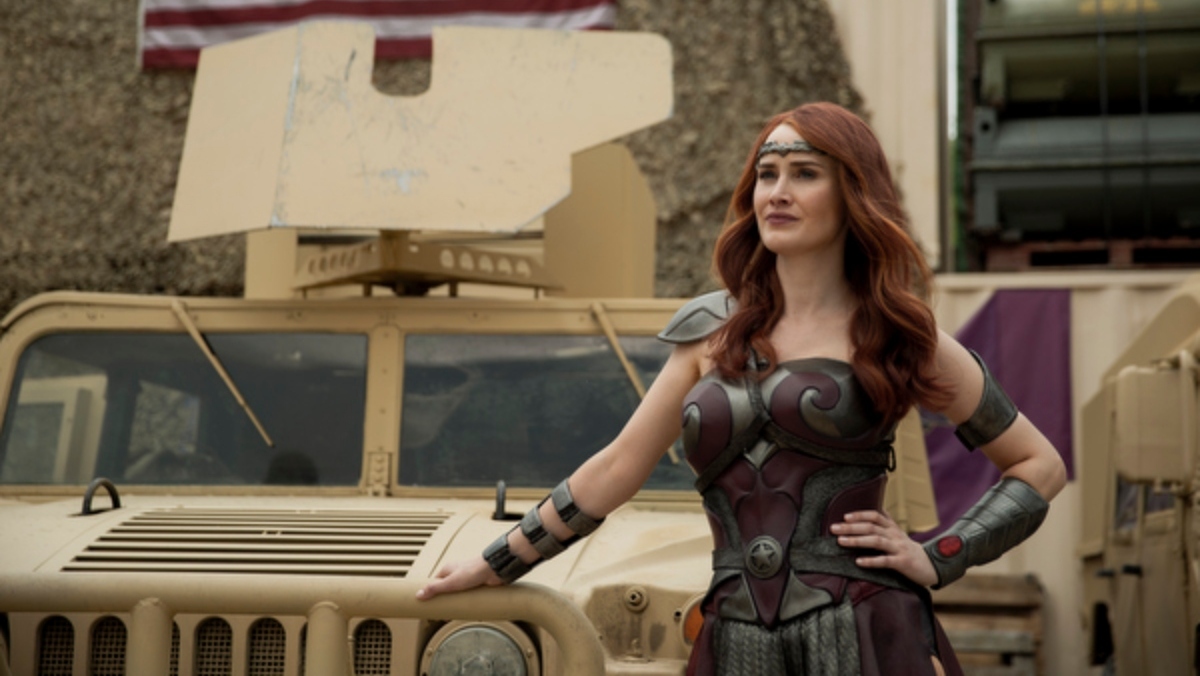 We meet Maeve as a senior member of The Seven. To the world, she’s indestructible; however, behind the scenes, she lacks the inspiration to do anything above the bare minimum. Years of working for Vought, where she’s essentially a commodity, have led her to lose all her passion. From her perspective, she isn’t a hero but rather a brand influencer. On top of that, she works directly with fellow Seven member Homelander, her manipulative and psychopathic ex-boyfriend. Drinking and smoking are her coping mechanisms, allowing her to suppress her feelings and appear distant and aloof. Maeve is essentially a robot being consumed by Vought and Homelander.

From a story perspective, Queen Maeve plays an audience surrogate to show how truly manipulative and nefarious Homelander is. But Maeve is also telling a powerful redemption story on her own. Unlike her colleagues, Maeve expresses remorse and is distraught over her negative actions because she wanted to be a real hero. And, she’s the only member who hasn’t abused her powers for personal enjoyment. But she’s given up pieces of herself to fit into this curated “superhero” mold, becoming a shell of a person with little faith in herself and humanity.

Following season one’s horrific plane crash, Maeve decides to take her freedom back. But she’s not just becoming a “good guy;” she’s reclaiming her power from her abuser. This shift makes her story powerful, reflecting a journey that many women have had to experience. Dominique McElligott plays this transition brilliantly and realistically, thanks to the show’s writing. Maeve doesn’t stand up to Homelander until the season two finale, which is a slow-burn but accurate timeline for someone gaining the courage to stand up to their abuser.

Yes, Maeve and Homelander aren’t dating anymore, but he still gaslights her and puts her through psychological torture. For example, Homelander outs Maeve on live television, which puts Elena in potential danger. This leads to Vought capitalizing on her queerness. Maeve’s sexuality, the last part of her that isn’t under ownership, becomes an avenue for exploitation. This abuse of power is Maeve’s breaking point and where she decides to take down Homelander.

McElligott perfectly balances the strength and vulnerability of the character, using her limited screentime to its fullest potential. As a viewer, you can’t help but be engaged every time Maeve is present. It is one of the most authentic performances on television today.

There’s something cardiac about watching a character stand up to their trauma. There are too many female characters who don’t get the privilege to do this in genre, which is why Queen Maeve’s journey is vital. She represents the path of fighting one’s trauma and seeking redemption in the process. Maeve may be a supporting character but she’s one of the show’s most interesting characters, as well as its true hero. Now that she’s answered the call to fight Homelander, it’s only the tip of the iceberg for the invincible woman’s quest to gain her inner strength back in season three. And I hope I get to see her do it.