If the universe had not created the praying mantis naturally, I think a talented science fiction writer would have eventually. They’re so wonderfully bizarre they seem too incredible to be real. With their thick bodies, odd-shaped heads, and long agile appendages, they look like the work of a mad scientist. Their posture also gives them an aura of intelligence, as though they are always problem-solving. And any creature that can problem solve can also plot. It’s hard to totally trust a praying mantis when you believe it might have sinister motives. That is unless you’re watching them hang out in a little tiny home. Then you can enjoy them for the delightful little bugs they actually are.

If that sounds silly, just wait until you see this video of them watching “TV” inside a miniature kitchen built just for them.

Insect aficionado Adrian Kozakiewicz of Germany shared a fantastic new video (which we first saw at Laughing Squid) to his YouTube channel Insecthaus. He crafted a little tiny living set for his praying mantises, who clearly enjoy watching television while eating dinner. Using a smartphone, he aired a clip of butterflies flapping around. That captured the bugs’ attention—and in some cases their appetite.

And since they were often willing to use the miniature chairs provided (at least when they weren’t crawling over the set), the visuals are cute little living dioramas of domestic insect bliss. 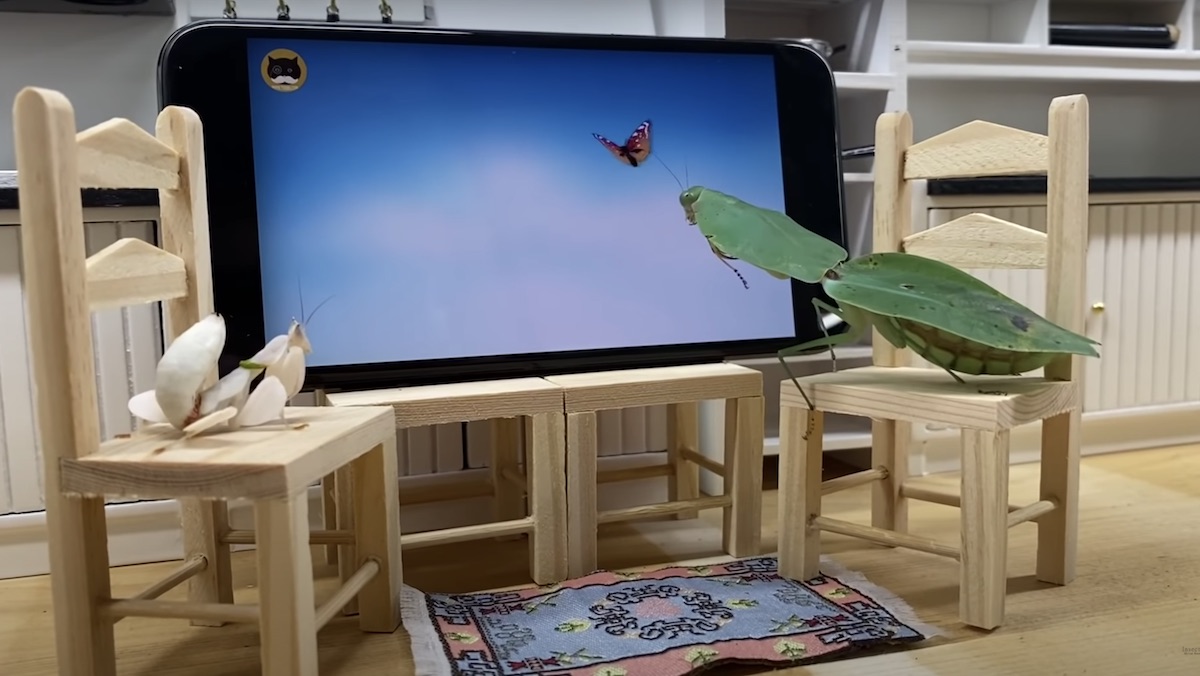 This video also doubles as a nice little introduction to different kinds of praying mantises. Four species appear in this video. That includes sphodromantis aurea, hymenopus coronatus, phyllocrania paradoxa (a.k.a. the Ghost Mantis), and choeradodis stalii. In this setting, all of them look a little less like aliens planning to invade Earth.

…Or is that just what they want us to think? With a praying mantis there’s no way to know, even when they’re watching TV.