Greetings, Rangers! Rita Repulsa is attacking Angel Grove once again. Only you – the Mighty Morphin’ Power Rangers – can stop her. Work together using your Ranger Power and your Zords to defeat her minions and the witch herself. It’s morphin’ time!

Renegade Games’ Power Rangers: Heroes of the Grid aims to bring the high-flying action of the iconic TV show to your gaming table. The core set releases in August 2019 alongside a number of expansions, thanks to a successful Kickstarter campaign last year.

The Heroes of the Grid core set features familiar characters from the original 1990s series. Mighty Morphin’ Power Rangers introduced us to endearing characters like Zordon, Alpha-5, and the first Rangers. Jason Lee Scott, Trini Kwan, Billy Cranston, Zack Taylor, and Kimberly Hart were just normal (albeit color-coordinated) teenagers until Zordon chose them to wield the power of the Rangers in order to save the world. 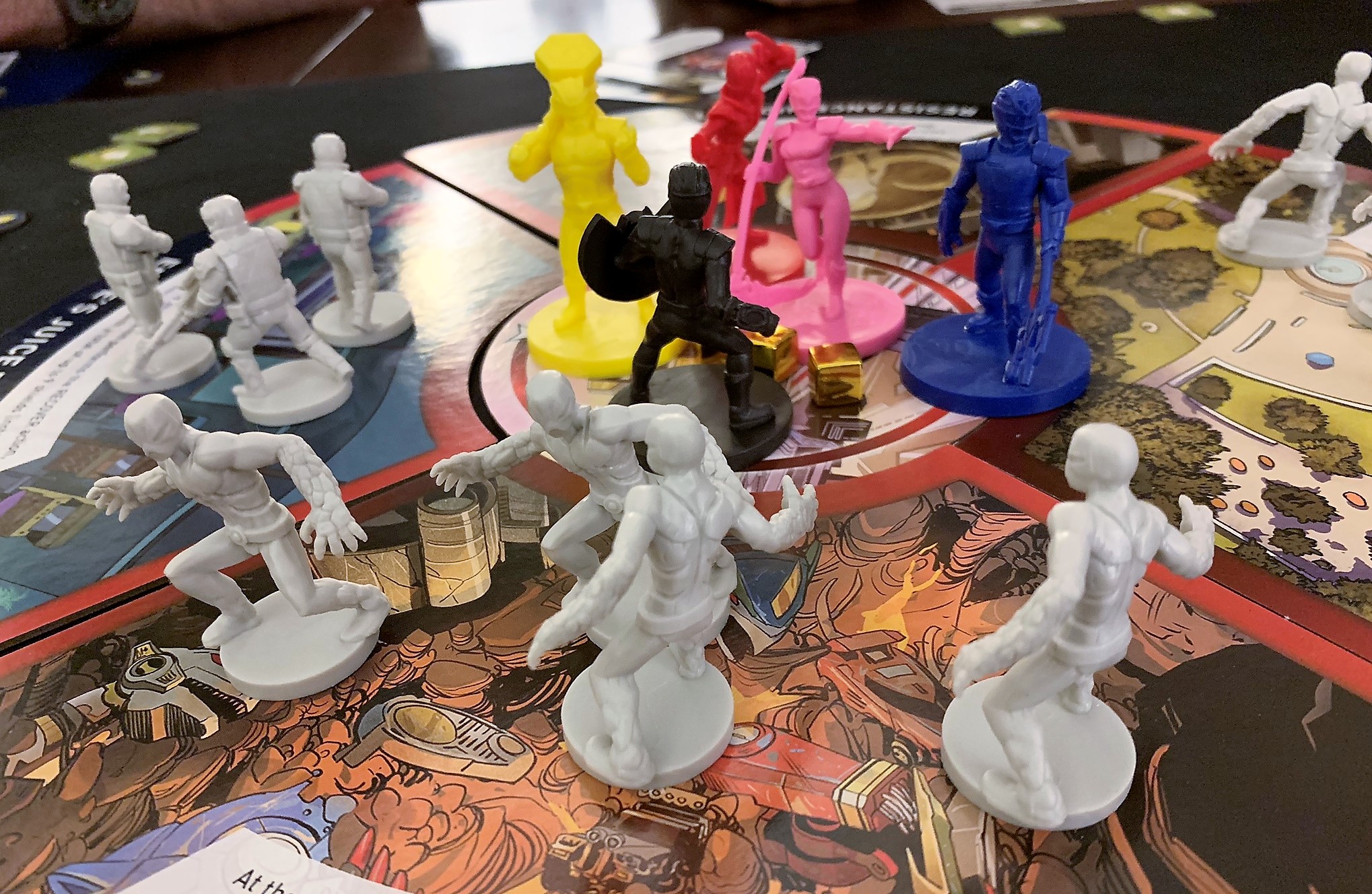 Heroes of the Grid is a cooperative board game that puts each player in the colored boots of their favorite Ranger. To start the game, you’ll choose which of the 5 rangers you’d like to play. Each features unique powers and an asymmetric combat deck. Expansions will allow you to choose rangers from other series. The Shattered Grid expansion, released alongside Heroes of the Grid, introduces the HyperForce Rangers along with a couple of TimeForce characters. In addition to abilities, Rangers also bring their unique Zord. Each play will be different as you learn to use a Ranger’s abilities.

Detailed large-scale miniatures bring Heroes of the Grid to life. Each Ranger is rendered in color appropriate plastic, while the monsters loom large on the board. While the Megazord is represented by a cardboard token in the base game, an almost must-own expansion is available to bring it to the table as a giant figure that towers over the enemy.

During a game of Heroes of the Grid, Rita will attack Angel Grove’s locations with Putties and monsters before joining the battle herself. At the start of each round 5 deployment cards are drawn. These cards direct you to fill the board with enemies. Putties are small minions, but if enough of them fill Ernie’s Juice bar it will panic. If all 4 locations fall to panic, the Rangers lose! Monsters are even more powerful than putties; these large bad guys are much more difficult to deal with.

On the player’s turn, Rangers can move from location to location – taking advantage of each location’s unique effect – before jumping into combat against Rita’s minions. The action phase is completely open; players can act in any order and even split up their turns to best coordinate. This drives the feel of Ranger teamwork home, especially since all Rangers get to participate in a battle so long as one Ranger initiates it.

In combat, you’ll have to manage each Ranger’s custom deck of combat cards. These cards are what gives each Ranger their unique feel and defines their role similar to the show. Billy is a tactical master; his cards manipulate the board and generate additional energy to power the Ranger’s attacks. Kimberly uses her bow to deal very high damage to single targets, while Zack Taylor uses his Hip-Hop Kido martial arts to deal area-of-effect attacks and finish bad guys off. 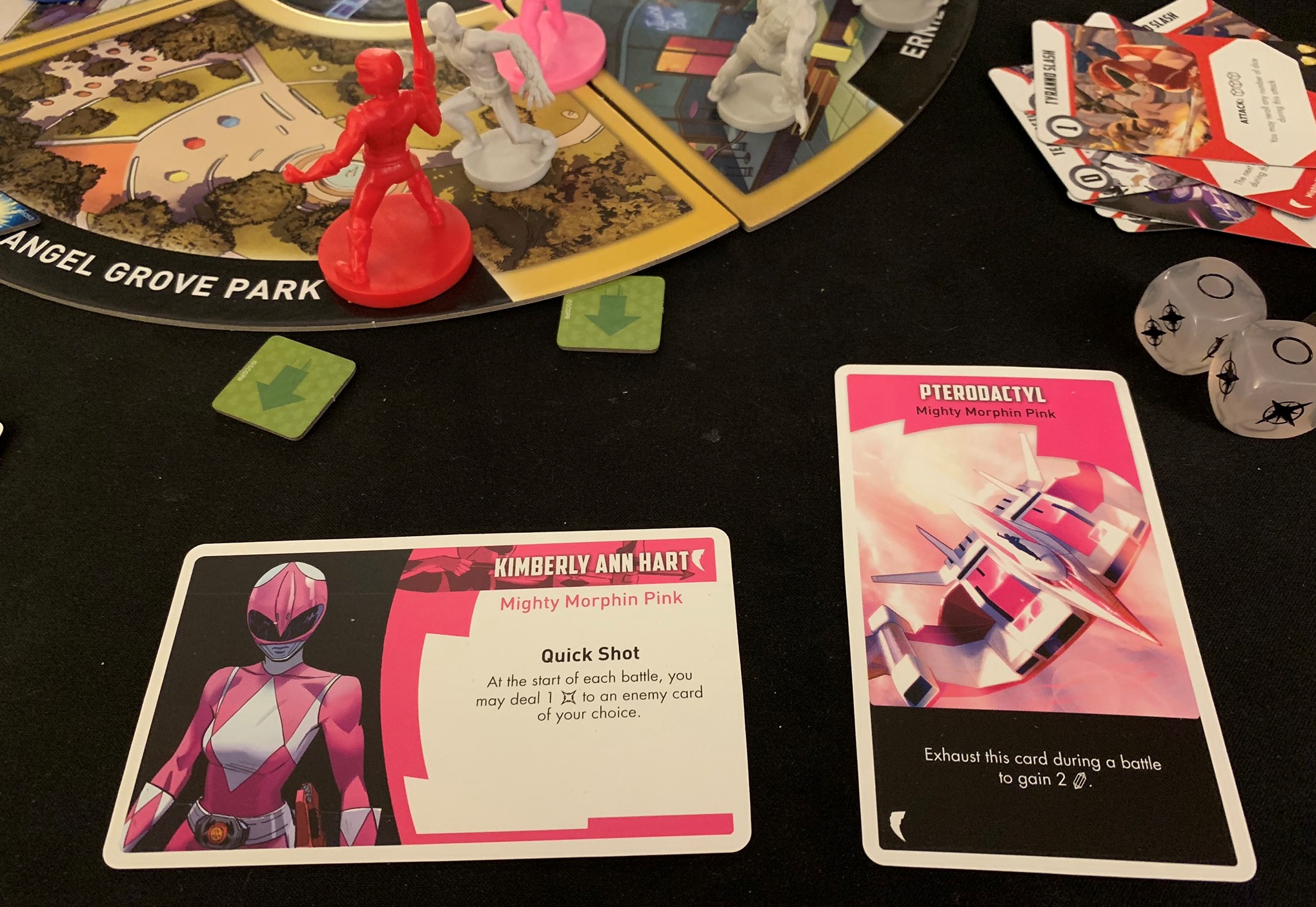 Cards also represent your health. When a monster attacks, you’re forced to reveal and discard cards from the top of your deck until you’ve revealed enough Shield Icons to absorb the damage. If your deck runs out, your Ranger is knocked out and will reappear at the Command Center so long as you have enough energy. If too many Rangers fall in combat, Rita wins! Luckily, smart Rangers can manipulate their deck to put high-shield cards on top. This prevents losing too many cards until the monsters appear.

Just like in the show, monsters like Pudgy Pig or Madame Woe represent much greater challenges to the Rangers. Enemy behavior is controlled through an innovated combat deck. Cards are drawn for each enemy – 4 for each monster – into a row of cards. Enemies alternate actions with the Rangers by moving to the next card in the row and executing the ability.

When a Ranger fights, they target one of these cards in the hopes of eliminating it. If the Rangers take out cards ahead of their activation, it buys them breathing room as the enemies skip their turn. This allows you to set up powerful combos that really make you feel like a team of heroes. Eliminating Putties also powers up your team and puts your powerful Zords into play. Defeat enough enemies and the Rangers can even summon the powerful Megazord.

Multiple monsters, Rangers, and location spaces provide a good deal of replayability in the core set but Renegade’s large suite of expansions ensures you’ll never be bored. The Shattered Grid expansion adds new Rangers, Monsters, locations, and enemies! At the start of the game, you can pick your Rangers and which minions you want to fight. Want to see how Angel Grove survives a combined assault from HyperForce’s Mastodon Trooper enemies and Super Putties? Power Rangers lets you live out this cross-series fantasy.

Can you take on this challenging cooperative game and save Earth from Rita’s attacks? Will you harness your Ranger powers through teamwork to defeat your enemies? Find out in Power Rangers: Heroes of the Grid, available soon from Renegade Games. Don’t forget to check out Becca Scott’s Rules Explanation, or the Heroes of the Grid episode of Game the Game!

In addition to Geek & Sundry, Raf Cordero co-hosts the gaming podcast  Ding & Dent. Chat with him on twitter @ captainraffi.