Some foods, like popcorn, are inextricably tied to American culture. We love our precious popcorn with salt, butter, cheese, caramel, and a litany of other flavors. It has its own national holiday, museums, and a permanent place at sporting events, amusement parks, and fall festivals. Sometimes we use it as festive decoration. But it’s always best with a good film.

One of life’s purest joys is settling into a theater chair (or couch) with a massive bucket of goodness to munch on. Popcorn and a movie are a classic pair in the vein of peanut butter and jelly; however, most people don’t know much about how this duo became an entertainment staple. The history behind popcorn’s rise to become the ultimate movie theater snack is full of fun surprises. 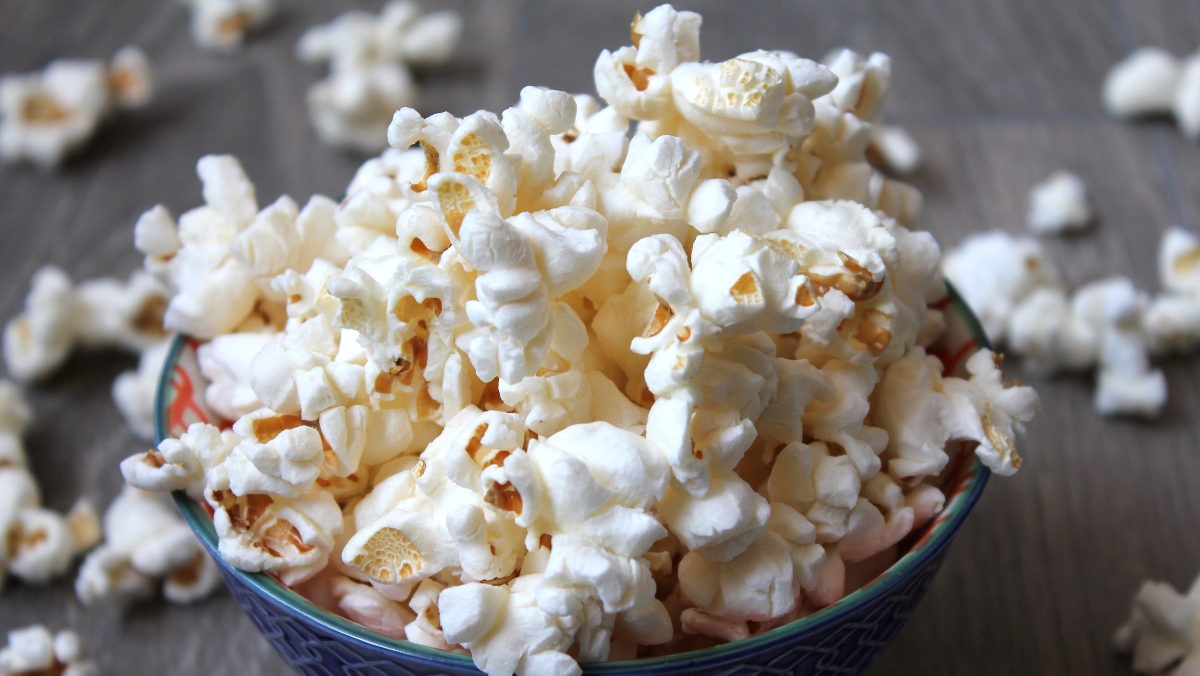 We tend to think of popcorn as a relatively modern food, but its origins go back for thousands of years. In Smithsonian magazine’s interview with Popped Culture: A Social History of Popcorn, writer Andrew Smith reveals that the earliest variation of the maize that led to popcorn appeared around 8,000 years ago in Central America.

In recent years, traces of popcorn were found in 1,000-year-old Peruvian tombs. On pre-colonized United States land, the Iroquois would pop corn kernels in pottery jars, using hot sand as their ancient microwave. Of course, it’s not clear how long the Iroquois Nation had been consuming popcorn before white settlers came in to confiscate their land and recipes. The Iroquois’ location in the Great Lakes area suggests that upstate New Yorkers, Vermonters, and Quebec settlers were among the first to pick up this snack from tribes in the 1600s.

European people found the kernel popping experience to be a thrill. The tasty food gained prevalence by the mid 1800s, leading to a mobile steam powered popcorn machine by Charles Cretors. The creation allowed users to produce the salty snack quickly for serving people at outdoor and public events like fairs and sports gatherings. Vendors began to purchase machines and quickly produce popcorn to satisfy popular demand around town. Popcorn became a winning treat with its aromatic smell, low cost, and relatively widespread availability.

Interestingly, popcorn was the last thing that movie theaters wanted within their walls as they began to open in the early 1900s. Motion picture theaters wanted to mimic the prestigious vibe of existing performance art theaters. At the time, theater productions were primarily for affluent white people wearing their finest clothing to match the theater’s lush décor. Small movie theaters soon led to plush “movie palaces” with fine carpets and furniture (two things that popcorn does not belong on). The audiences were literate (due to all movies having no sound and title cards) with some level of affluence.

The eventual introduction of movies with sound in 1927 expanded movie theaters’ target audience past those who were literate; but food and drink were still not a part of the viewing experience. This began to change during the Great Depression’s financial pinch. People could enjoy the simple luxury of popcorn (which cost five to ten cents) without breaking the bank. A vital part of the moviegoing experience is sneaking in bits of food and fun, which is exactly what patrons did despite signs forbidding popcorn. Candies like Baby Ruth, Milk Duds, and Goobers made their debuts but popcorn remained a standout snack. 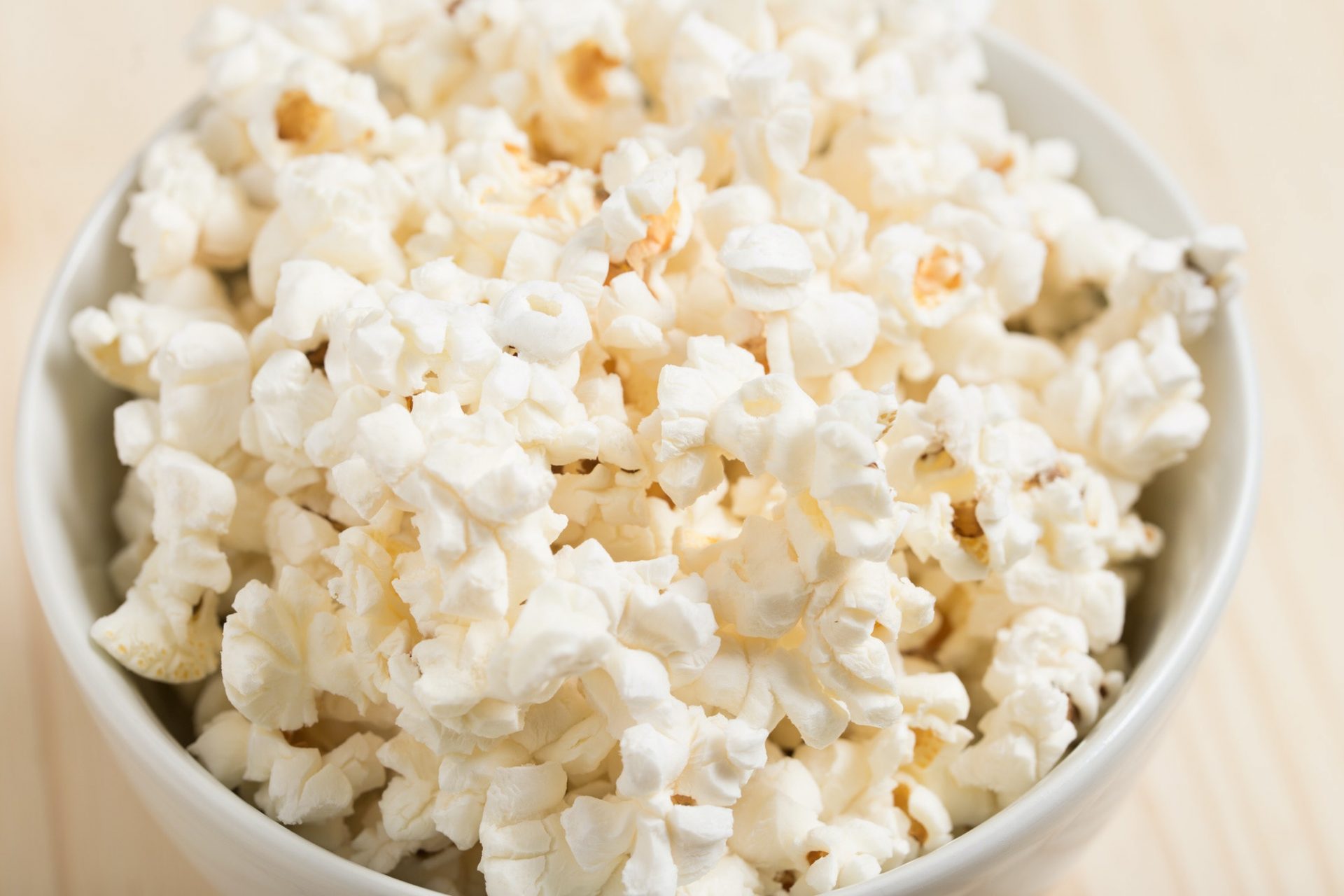 Theater owners began to take notice of how much people loved popcorn. They hadn’t figured out the logistics of making it themselves but, in classic American fashion, they wanted to capitalize on it. So, theaters began to allow vendors to sell directly in front of their buildings for a fee. Eventually, the code for producing popcorn indoors was cracked and some theaters got into the concessions business.

Owners soon came to a few realizations: 1) cutting out a middle man leads to more money, 2) theaters without popcorn machines have lower profits leading to shutdowns, 3) popcorn doesn’t rely on materials from exporters. The final point hit especially hard due to World War II, when items like sugar were harder to obtain. By the mid 1940s, popcorn and movie theaters became official entertainment besties, giving way to the birth of concession advertisements. This likely paved the way for the movie trailers we see today.

The rise of television caused a temporary dip in moviegoing; however, popcorn makers got smart with home options like EZ Pop and Jiffy Pop. Microwaves hit the scene, drive-in movies became popular, theaters rebounded, and the tradition of watching a movie with a tub of buttery goodness became an American staple.

The Future of Popcorn at the Movies

Today, movie theater popcorn has become a source of both jokes and ire with its astronomical pricing. A bag of popcorn can run most viewers anywhere for $6 to $20+ for refillable bucket specials! This hasn’t kept people from snapping up bags so they can toss a few kernels into their mouths.

The relationship between popcorn and traditional movie theaters is perhaps at its most dire point with the COVID-19 crisis. Many theaters have been shut down for months or are open at very small capacities. Concession stands (if they are open) no longer have super long lines and large batches of popcorn.

But this doesn’t mean it’s the end of going out to see movies and chomping on popcorn altogether. Drive-in theaters are beginning to rise again due to social distancing guidelines with vendors coming out to sell movie snacks.

It may take a while for the masses to return to movie theaters with popcorn in hand. For now, the love of popcorn and movies can still carry on at home and drive-ins while latest chapter in the movie theater/popcorn saga plays out. There is nothing (not even a pandemic) that can keep this classic duo apart.