The notion of the lone assassin being a noble figure in popular cinema goes back to Italian westerns and before them, Japanese samurai movies. The idea of a skilled killer is oddly romantic in cinema history, and we sort of overlook (or even applaud) their ability to murder with precision as long as they mainly kill bad people, or are in some way sensitive. This kind of hitman movie reached a renaissance with 2014’s John Wick, with its colorful and complex criminal underworld for such a mythical figure as John Wick to roam. We also have it to blame for the pretenders coming out, none less deserving than Netflix’s Polar.

The trailer for Polar had the internet all abuzz; a grizzled and ripped Mads Mikkelsen as an assassin approaching 50 who is being hunted so his bosses don’t have to pay his lofty retirement package. It looked colorful and full of fun, bloody action, and while sections of the movie–based on a Dark Horse graphic novel by Victor Santos–have the qualities befitting a good, pulpy actioner, it too often shows us a grotesque and lascivious take on such material, with hateful characters and very badly judged attempts at gross-out and frat humor. We also have Deadpool to blame for things like this. Music video director Jonas Åkerlund comes by his sensibilities honestly, with good composition and frenetic cutting, but also the more egregious aspects of such things. Basically, Polar comes across as an acolyte of Michael Bay decided to make Deadpool and John Wick as a John Waters movie but without any self-awareness or irony. It’s gross, it’s mean-spirited, it thinks it’s being funny most of the time but ends up just being obnoxious, and worst of all it squanders a very good Mads Mikkelsen performance. 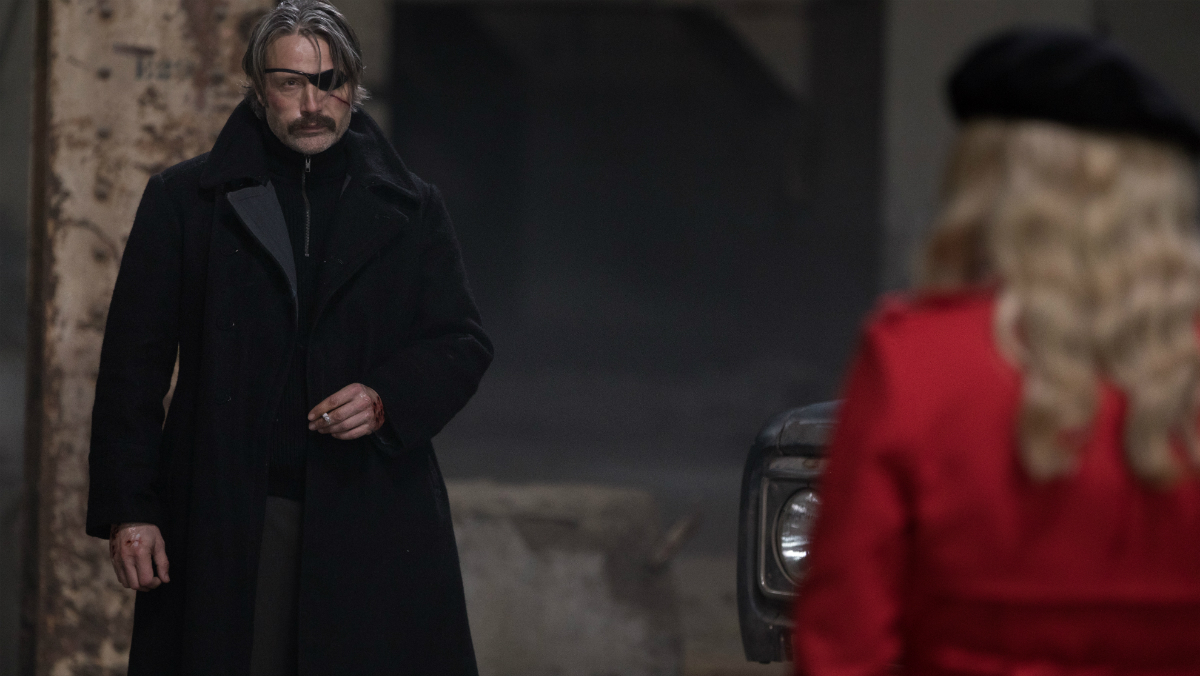 Mikkelsen plays Duncan, aka the Black Kaiser, a high-priced assassin reaching the age of 50, the age at which the organization mandates all killers retire. He’s set to collect over $8 million through his investments and funds and wants to live a quiet life in his snowy cabin in small town Montana. Duncan takes a shine to his solitary and rather nervous new neighbor (Vanessa Hudgens) who clearly has a tragic backstory. Unfortunately, the company’s new owner–played with true repugnance by Doctor Who‘s Matt Lucas–doesn’t want to pay him or any of the other aging hitmen, pocketing the money himself. He’s aided by another veteran assassin, Vivian (Katheryn Winnick), who is sympathetic to Duncan and scared of his skills, and by the “A-Team,” a group of young assassins who work in tandem to kill various aged-out hitmen, and anyone else really. And it’s the A-Team and their antics which provide the movie’s most objectionable scenes. They’re ruthless and violent, sure, but one of their ranks–Sindy played by Ruby O. Fee–is, for lack of a better term, the decoy who dresses provocatively and has sex with the target so the other members of the team can line up their shots; this character is portrayed so vapidly and so without any depth or agency, and the camera leers at her and zooms in on her body with needless contempt. The movie even puts her in an abusive situation for no reason for a scene that lasts roughly two minutes. 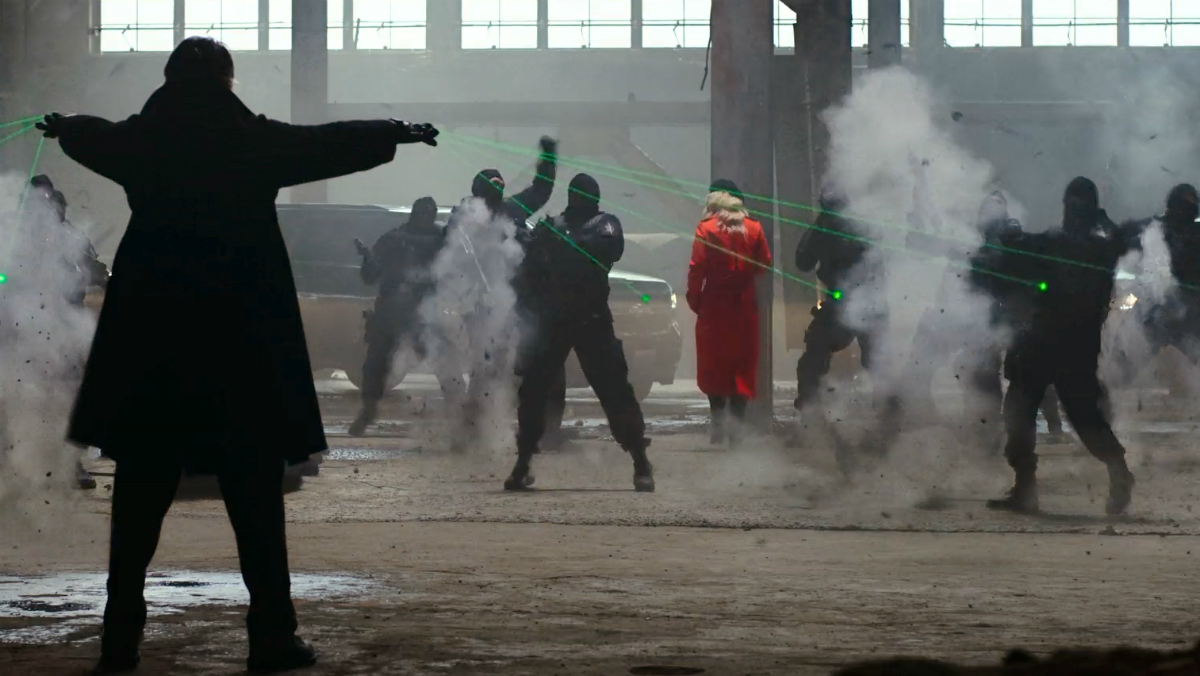 Polar also can’t settle on a tone. Parts of the movie feel very somber and serious and getting into the psyche of Duncan and his strange relationship with the neighbor, and there are moments of extreme violence that are played entirely straight, and are even pretty harrowing. Duncan goes through physical hell in his battle with the company and almost has an Oldboy-ish vibe at times. But on the other side, there is over the top gross-out humor, and specifically humor at the expense of people with physical differences. Morbidly obese people are killed in “humorous” ways, as though a guy who can’t even get out of his chair requires roughly 900 bullets and a garrote wire to put down. And it’s really a shame, because I think Mikkelsen and Hudgens do a fantastic job for most of their scenes and Duncan could have become a screen badass of Charles Bronsonian proportions. Sadly, even he can’t escape the attempts at bad, juvenile dark comedy that serve not to endear us to our main character but to make him less and less sympathetic. It’s only through the actor’s prowess that we have any feeling toward him at all beyond disgust, as he does the exact same things as the villains, and shows as little regard for all forms of life as anyone else in the movie. The ending eventually explains a bit more of what makes him tick, but by then it’s been too little too late. 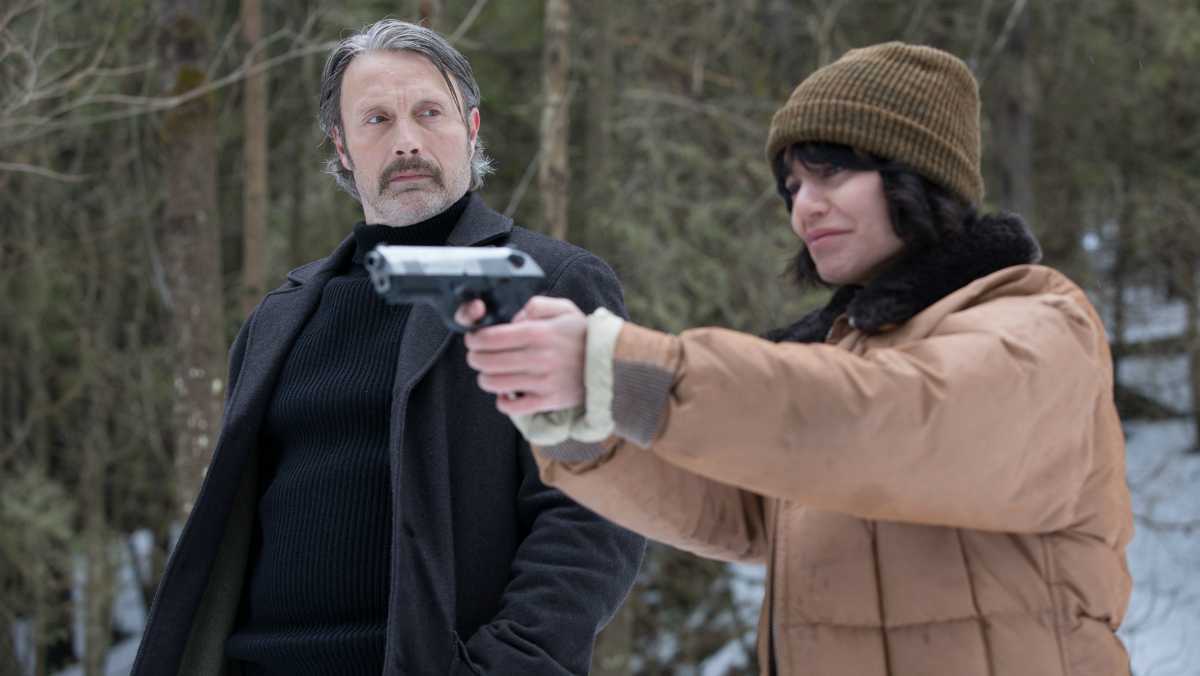 Polar would not have been made without the successes of other similar movies in recent years, and despite a good cast and a great lead, the movie offers us little more than ridiculous graphic violence, hateful depictions of women, and a general disdain for literally everything. Don’t let this one autoplay.