The cast of Supernatural recently announced they were hang up the rock salt after 16 seasons. Throughout its ups and downs, the show carried on the tradition of a classic TV archetype; the Monster of the Week show. Every week there’s a strange new creature that the good guys have to investigate, keep from killing people and put down in a clever way. It belongs in the same pantheon as other shows like Buffy the Vampire Slayer, The X-Files and Kolchak The Night Stalker.

The RPG that shares its name with the type of show, Monster of the Week, offers the same thrills and chills as Supernatural for fans of tabletop (just ask The Adventure Zone). Players choose a playbook modeled after the classic archetypes from these shows and throw down with all sorts of creatures all over the world. The system works very simply. Whenever a player makes a move, they roll 2d6 and add a trait. If it’s a 10 or better, they get the best possible outcome from the move. If it’s a 6 or less, they get experience but the GM is going to complicate their life. If it’s a 7-9, player and GM both give a little and get a little.

Whenever Sam and Dean needed to figure out how to stop a big bad, they could always call on their friend Bobby. The Expert has a lot of resources to use to figure out what monster is plaguing the heroes this week. They have a sanctuary they can secure or might have a dark past they can consult. The Expert runs the risk of having previous run-ins with the monster that could make the case personal.

Sam’s character…evolved over the span of the show. A lot. Choosing the Spooky playbook is a good choice for fans who liked Sam during his phase when his heritage was cloudy and he may or may not have been Lucifer’s blood relative. This playbook represents the unpredictable nature of his powers. Anyone in Monster of the Week can Use Magic but for Spooky characters like Sam, weirdness just comes naturally.

It might seem like playing an angel in an RPG would be overpowering, but The Divine playbook makes it possible. Not only does it offer abilities like angel’s wings and divine knowledge, it also wraps up the character in a lot of obligations from their divine masters. Like Castiel, the character is a powerful force in the game…so long as they are working for their boss’s agenda. If that agenda conflicts with where the players want to do, trouble and drama ensues.

This playbook represents classic early-season, kill-all-monsters Dean. There comes a point in every mystery when the investigation is over and the butt kicking begins. The Wronged is very good at battling against monsters with their signature ride and their signature weapons. Ever wonder if a werewolf’s regeneration can keep up with the messy damage of a chainsaw? The Wronged probably knows the answer to this question…or is willing to find out.

The Book of Mysteries Awaits 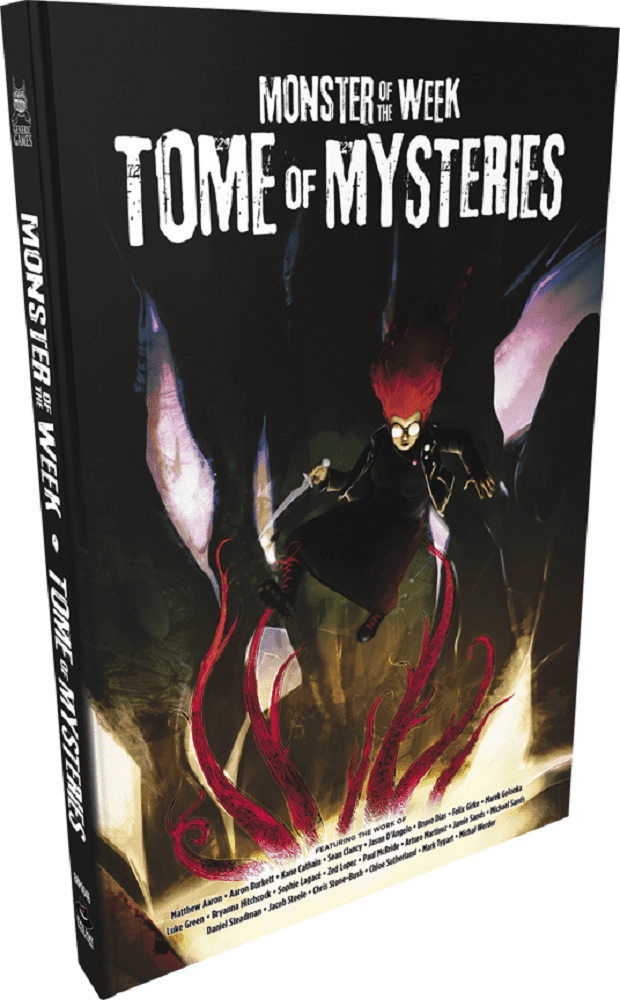 Monster of the Week contains everything a Keeper needs to run a game of mystery and action. But every hunter knows its a good idea to bring back up. Evil Hat Productions will be releasing Tome of Mysteries in May to expand options for players and keepers. The book offers new ways to use Weird abilities like Weird Science and Empathic Clues. There are also four new playbooks to choose from:  The Gumshoe, The Hex, The Searcher and the Pararomantic. Keepers get even more tips, tricks and advice to spook their players in addition to 29 fully detailed mysteries ready to go into any game.

Supernatural might be coming to the end of the road, but the hunt is just beginning for Monster of the Week.