Of all the nightmares Stephen King has given me over the years, none has been so nightmarish as that incurred by his 1983 novel Pet Semataryâ€”and worse still, its ’89 film adaptation (which lured me in against my better judgment with the misleading casting of Herman Munster. Oh how naÃ¯ve young me was.) The thing aboutÂ Pet SemataryÂ that makes it leagues more horrifying than, say,Â The ShiningÂ orÂ It orÂ Carrie is that it assigns horror to something that’s supposed to be comforting. Of course abandoned hotels and clowns and high school are mortifying. But our pets? We’re supposed to love our pets!And just like Church the cat, it seems my old fears will be brought back from the dead in the form of a remake 30-years-in-waiting. Watch the first trailer below:

Of course, anyone who has read King’sÂ Pet SemataryÂ or seen Mary Lambert’s film adaptation knows that undead animals make for only one piece of the horror. Granted, the trailer for the new version, co-directed by the likes of Kevin KÃ¶lsch and Dennis Widmyer, only drops a few hints at the turmoils yet to come, primarily in the form of that explosive shot of a speeding oil truck, a series of bloody footprints, a bunch of kids wearing horrible masks, some veryÂ eager hands reaching into frame from god knows where,Â and an eerie bout of narration delivered by the great John Lithgow.And yes… we do get a shot of that poor, hell-stained kitty. 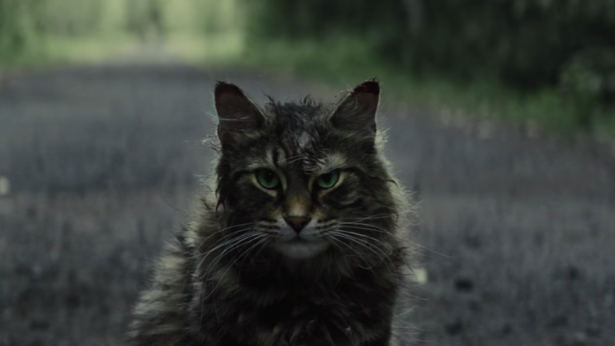 What do you think of the first trailer forÂ Pet Sematary? Let us know!