People in Indonesia Are Using Boardgames to Fight Corruption - Nerdist

People in Indonesia Are Using Boardgames to Fight Corruption

We’ve been reminded of the didactic origins of some tabletop standards lately. Chutes & Ladders has roots in an ancient Indian game that taught lessons on vice and virtue, and their effects on one’s Karma. Monopoly was actually designed to make players experience the excesses of capitalism firsthand. Semai‘s instructive aims would seem to be even more direct, however.

The game’s been devised by SPAK (an acronym roughly translating to “I am a Woman Against Corruption”), a division of the Australia-Indonesia Partnership for Justice. As the outfit kept at efforts to clean up Indonesian institutions, its members realized the real rub of corruption is that it’s systemic. The lowly citizen who pays a bribe enables the government official who takes the bribe. And seemingly innocuous acts of generosity–like parents giving gifts to their children’s teachers–can inadvertently foster a culture where kickbacks are expected. 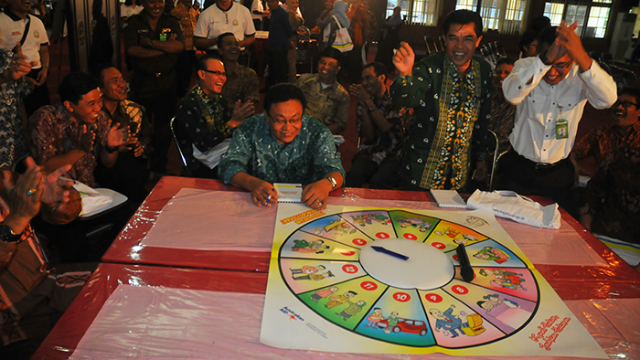 So, according to Al Jazeera, Semai has become popular with the same Indonesian teachers who may have previously stumbled into such temptations of favoritism. The words for “nine values” fold into the game’s name. It’s easy to reproduce, and distribute, and it tests players’ sense of right and wrong–presenting them with a series of scenarios, and asking which virtue could be lacking in its characters’ behavior. Through these little morality plays, they might learn to share the class computer, or turn down offers to cheat on a test.

Of course, a person’s virtue doesn’t stop being tried by the end of grade school. SPAK has aged up the set-up of Semai in other games, for teenagers and even adults. In fact, Indonesian government officials have been eager to host workshops where agents see how to tun down bribes and report corruption on the tabletop. Gamifying these lessons requires more engagement of the students–more so than passively watching a video on the subjects, for instance–and the designers’ hope that will make their points stick better.

How do you like the notion of Semai? Sound off in the comments.