OVERVIEW: The Designer of HEROSCAPE is Back With SHIFTING REALMS

If you wander the halls at Gen Con you’ll eventually come to a certain cluster of people. Beyond their laughs and between their intense focus lies a table full of rising hills and broken ground. Soldiers from the Second World War, Vikings from another time, and dragons from another place all rage with reckless abandon. This is Heroscape. Don’t tell these people it’s been out of print for nearly a decade, for they don’t care.

Craig Van Ness worked at Hasbro during its golden age. He was in the designer’s seat for Heroscape, Queen’s Gambit, and Star Wars: Epic Duels. But that was yesterday. Today he’s running Soaring Rhino alongside his brother Jeff. Their first release is Shifting Realms and that’s what we’re here to talk about. 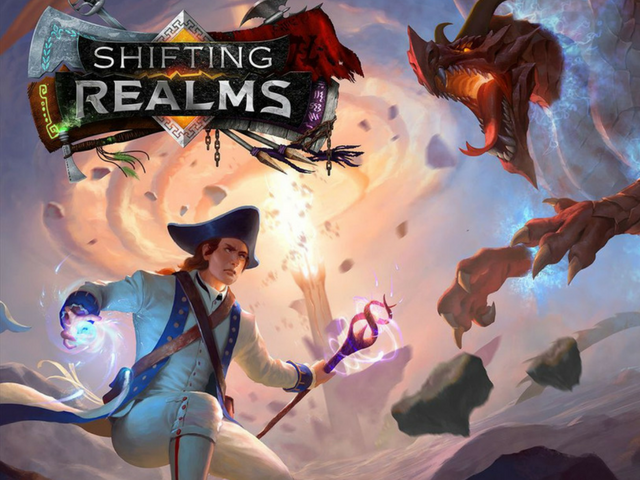 The concept here is classic – the players represent warring factions who have caused a cataclysmic event to occur. This has ripped apart time and space resulting in the collision of disparate realms. We’re returning to these splintered dimensions and repairing them by restoring order and healing their wounds.

Yet, we are tribes at war. So we race to accomplish this task in grand competition. The action takes place across three randomized boards seamed together horizontally. These realms are taken from a larger pool that includes elements such as the stout grey dwarves of Tyrfing, the legendary pirate colony Libertatia, and the enslaved orcs of Dovre. There are five options in total, each offering a unique set of buildings and flavor.

This setup of randomized content is enticing. It’s the defining quality as it provides variety upon subsequent plays and shifts your strategic approach. In addition to altering the building options, each possesses a unique story deck for players to plumb that will alter the overarching narrative.

Take for instance the gray dwarves. These little dudes are obsessed with carving out the land and burrowing deep. This is not simply to cull the gold from the earth but also to keep their heads low. You see, an enormous dragon flies overhead terrorizing the populace. Represented by a fiery miniature, story cards you draw allow you to move the beast about and devour player pieces. Structures are safe, but your hardened warriors and fragile scouts will find their way into the wyrm’s gullet.

The orc board, on the other hand, features a menacing troll lord. You can sacrifice your warrior pieces in battle to remove one of the tyrant’s health tokens, claiming a prize and inching towards liberating the greenskins.

These wonderful narratives and personalities tie into the endgame trigger. Once two of the three settings have reached their finale, the game abruptly ends. This works well to keep an element of risk and unpredictability surrounding the conclusion as players dictate the tempo. 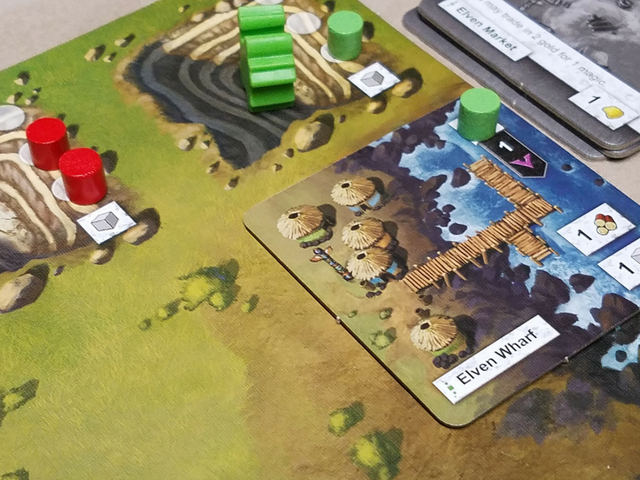 Amid the shifting modularity is a solid foundation. The core mechanisms are light and direct. You move your scouts along the board to gather resources and protect them with your soldier meeples. Those warriors can battle other players with a deterministic combat resolution that incentivizes you to protect your hapless workers. This doesn’t dominate the game but it provides a tool for interaction and opens up a tactical element that’s interesting.

One thing to note is the game’s core is very bland. If distilled down to that simple worker system where you gather resources and then manufacture buildings – it’d be pretty underwhelming. This merely serves as a support system for the overlaying asymmetry of the design. That rampaging dragon and its ilk inject flavor and provide something for you to hang your hat on.

Still, the game never grows overly complex. The dragon merely removes a single piece when stomping through a space. Pirate raids are accomplished by laying a couple of meeples down and claiming your prize. Defeating the troll is simply removing two of your warriors and flipping the token. It’s all very streamlined and easy to grok, sitting comfortably at the border between light and medium weight. 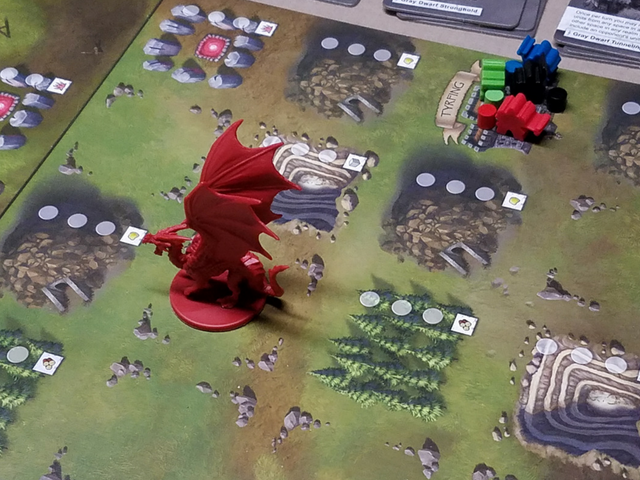 The buildings you slap down intertwine with those narrative bits by providing ongoing resources or special abilities to wield. As the worlds develop the big picture comes together with success.

Shifting Realms leverages its simplicity by providing a wholly unique design that doesn’t quite feel like anything else. It’s a Euro-style game, but it’s not worker placement or tableau building. It mixes in elements of thematic games and harnesses a bit of gusto, but it keeps things focused. The game will almost blow by you at times as it clocks in at a very brisk 60 minutes. All of this makes for an effective combination.

Seeing the Van Ness brothers team up to re-enter the industry is endearing. This inaugural title is an effective design that comes through on its promise and maintains interest. As an expansion of slightly more complex realms sits on the horizon, it looks as though the future is bright and they’re poised to soar.

Have you played Shifting Realms? Let us know in the comments!  And be sure to join host Becca Scott on  Game the Game every Thursday here on Geek & Sundry to watch the best boardgames played with fantastic guests!