OVERVIEW: AXIS & ALLIES & ZOMBIES is Exciting for New & Established Fans Of The Series

There is a certain ubiquity in the Axis & Allies board game franchise from Avalon Hill. It’s well earned, with the original game of the franchise being published all the way back in 1981. It is a game whose theme is familiar to anyone who’s taken a high school history class, and a game that has proven that the formula is enduring through its popularity over all the years.

With that said, as new gamers discover board games, that very ubiquity can make the tabletop wargame series one that might be intimidating for new players to get into. There’s a learning curve that new players need to overcome. Learning and mastering the multiple steps of a turn, developing a working understanding of the variety of individual units, and gaining mastery over the (large) map, combined with resolving all the combats across the board can seem like an overwhelming task. When you mix in a player who is much more familiar with the game, that learning curve becomes all the steeper as you try to learn the game up against tried-and-true strategies from an Axis & Allies veteran. 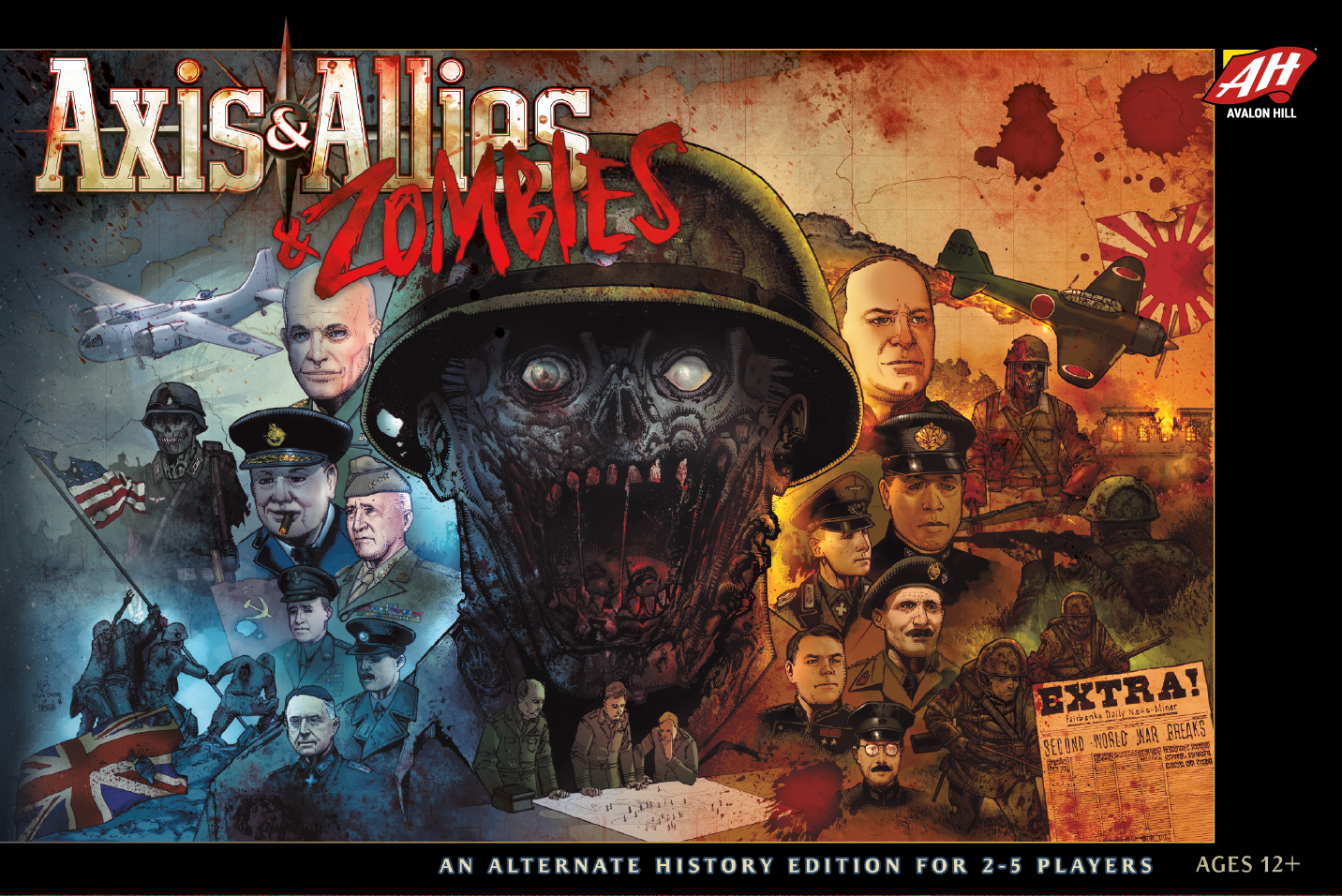 It’s one of the reasons why the newest addition to the series, Axis & Allies & Zombies is a fantastic entry point for gamers new to the series. While the entire series is set in a speculative timeline where the outcome of World War II  has not yet been determined, the addition of zombies does a few things to liven up (for lack of a better term) the experience for experienced players and make it accessible for new fans.

A Great Introduction For New Players

While the game advertises its length as taking one to three hours, Avalon Hill has also included a fantastic introductory scenario for new players, distilling the experience of Axis & Allies & Zombies into a 30-60 minute, 2-player romp that gives players all the tools they need to develop an understanding of the mechanics of the game, their units and some basic strategy. Ivan recently taught us the ins and outs of the mechanics on How to Play, and while it may seem like a lot, playing through the introductory scenario demonstrates how easy the game is to nail down.

New players to Axis & Allies will get a solid footing of the game just by playing this scenario. Each turn and combat may seem like it’s a lot of steps, but when you go through it, the process is quite straightforward and simple to nail down after a turn or two. On the contained map, turns go quickly, combats are resolved while still feeling meaningful, and each player has a distinct objective and the scenario has a defined endpoint.

As a learning experience for games, it’s all created in mind for new players so that when they’re done it, they can confidently jump into a full game and not feel as though they’re drowning. It’s brilliant and thoughtful design on Avalon Hill’s part.

Learning the mechanics and the moving parts is one thing new players have to overcome, but seasoned Axis & Allies players and their well-developed strategies is quite another. With that said, the inclusion of zombies creates situations where veteran players of the game are forced to evaluate, rethink and adjust those strategies. When I interviewed Axis & Allies & Zombies designer Scott Van Essen, he noted, “You have to change your plans, you have to shift to new fronts and you have to find different ways to attack your opponent because the zombies become this weird, invisible map that you need to find a way around.”

For new gamers, it means those perfected strategies from your experienced opponents are thrown out of whack, and that helps even the footing when the game hits the table. For experienced players, there’s a new challenge on the board you have to now contend with. It brings new life (or unlife) to an experience that might think you know as well as the back of your hand.

A Standalone Expansion For Axis & Allies

The insertion of zombies into that established game makes Axis & Allies & Zombies an incredible value to Axis & Allies fans. They have a standalone game that’s great to introduce the series to friends, as well as an expansion to a game that’s likely well-played and used that injects a new twist to a classic.

If you want to see how the game plays, check out this episode of Game the Game, where it hit the table (with an undead snarl):

While historical wargames are very much a part of the landscape of tabletop gaming, they were also very much a specific niche of the hobby. Axis & Allies as a series was never strictly a historical wargame, the leap into true (low) science-fiction with the addition of zombies somehow makes the theme more accessible to an audience who may have otherwise not been as interested in this type of game or genre. Given the relationship of Avalon Hill and Wizards of the Coast (the former being a subsidiary of the other) one can hope that more cross-genre opportunities await in the future: I’m personally hoping to see these kinds of mechanics and systems applied to a world with dragons, dungeons, and magic (though it’s likely a longshot).

In the end, though, Axis & Allies & Zombies offers an incredible entry point to the genre and the series for new fans, compelling and interesting mechanics for experienced players, and a fantastic way to introduce this storied series of games to a brand new audience.

Learn more about Axis & Allies & Zombies on Avalon Hill’s site, and pick the game up at your friendly local game store!

Teri Litorco is a professional fangirl, the author of The Civilized Guide to Tabletop Gaming as well as a YouTuber who makes videos about games with miniatures. Follow her on Twitter, Facebook, and Instagram.