Three months. A full quarter of this year has been spent inside, afraid and worried. A global pandemic will do that. Slowly a malaise set in. Life now is just waking up, going to a different part of your apartment to do work, maybe masking-up to go for a walk or to get groceries, and then back home. The quarantine is good; gotta flatten that curve. But cosmically, things have been—da doy—pretty tough. Throw racist police brutality and subsequent protesting in the mix and it wears on a psyche. Video games have been a respite for a lot of us. One game, Outer Wilds, has given me more than respite; it’s given me complete existential ennui. In the best way, of course.

Outer Wilds isn’t a brand new game. It’s been out for a little over a year, but it’s been a buzz for the last five. From indie developer Mobius Digital, the game is all about solitude, quietness, exploration, problem solving, and ultimately oblivion. Every play session I’ve had has felt different even if the gameplay is super straightforward. Like one of the themes of Outer Wilds, playing the game during *gestures everywhere* is a quantum state.

For the uninitiated, a brief (and mostly spoiler-free) explanation of the premise: You play as an unnamed, four-eyed alien astronaut. You wake up from a nap on the peaceful and wholesome planet of Timber Hearth, at a campfire at the foot of the launch site. After talking to some folks and learning all the various things you’ll need for your journey to the stars—how to maneuver the ship, how to spacewalk in zero gravity, how to use your various gadgets—you head to the planet’s observatory to get the launch codes. There, a newly unearthed statue of the ancient aliens who discovered this solar system scans you.

Where you go next is up to you, but in any case, 22 minutes after you initially woke up, the solar system’s sun goes supernova, destroying the entire system and, as a result, you. You die. But then your memories play back in reverse—a side effect of the statue scanning you—and you wake up back where you started. Everything is back to how it was before, except now you have the memory and your ship’s log retains any information you picked up. 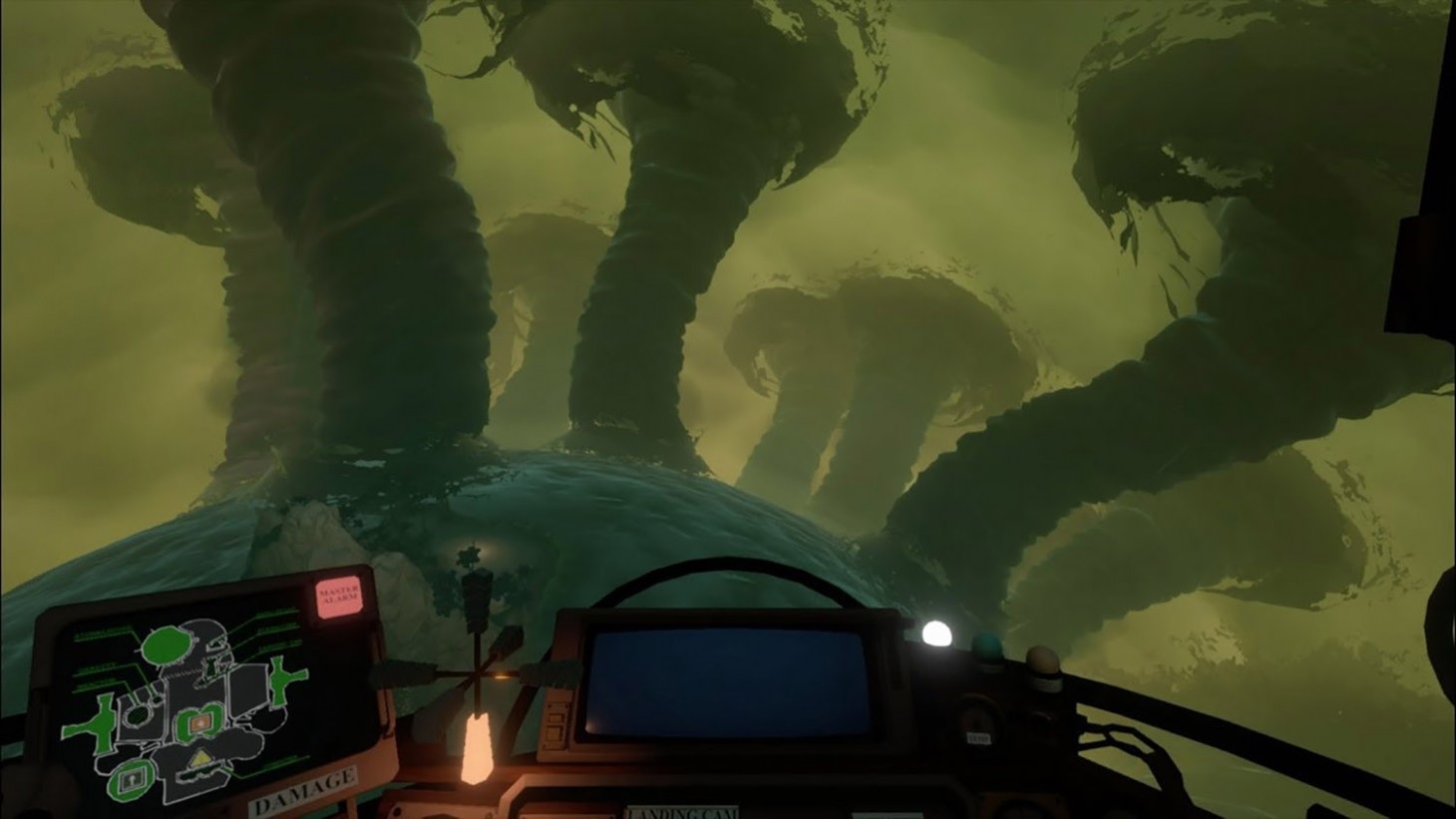 So, ultimately, your job in Outer Wilds is to visit all of the surrounding planets and celestial bodies and try to unravel the mystery of what the ancient aliens, the Nomai, did that is resulting in the sun exploding every 22 minutes and your subsequent entrapment within a Groundhog Day scenario. Along the way, on each of the neighboring planets, you encounter a different member of Timber Hearth’s exploration team, always fully space-suited and generally resigned to their fates stuck on their respective discovery worlds. They’re isolated, just like you; your only interactions are in full PPE for a few minutes at a clip. But it’s always a relief to see their campfire and hear them playing the same song.

During your exploration, you have to contend with gravitational effects and anomalies. Flying your ship requires precise and ginger controls; too much thrust in one direction or another could send you badly off course. You could crash into the planet, get pulled into the sun’s gravity and burn up, encounter storms and flying debris, or, if space-walking, you could run out of oxygen and suffocate. There are also various strange elements on the planets that could kill you; you could get trapped in a cavern gradually filling with sand, step into the path of a falling meteorite, or miscalculate a jump and fall into a black hole. And even if you manage to do everything correctly and learn all you can in particular area, it won’t save you. The sun will explode in 22 minutes. 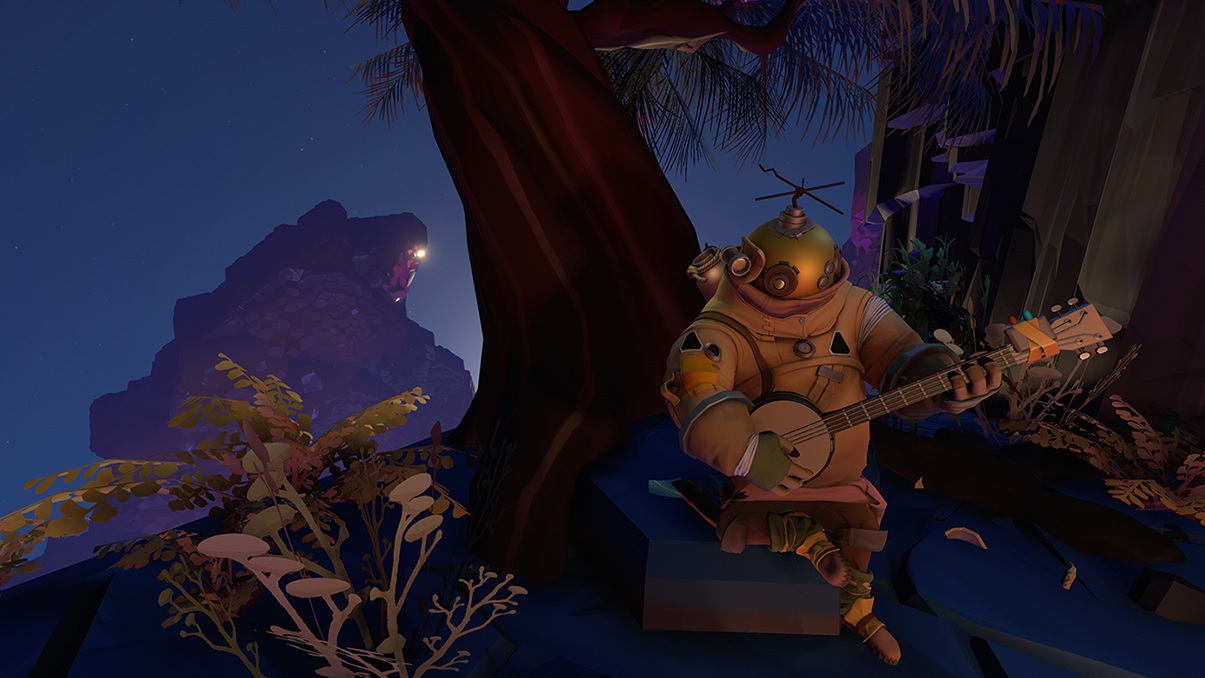 To borrow a phrase from Jacob Geller, death is inevitable in Outer Wilds. And while playing these past few weeks, I’ve found myself alternating between extreme unease and unforeseen peace. Alternating almost as frequently as complete time loops, I’m both anxious and calm. Sometimes I wake up and the magnitude of the tasks I need to accomplish sits on me like a pile of bricks. I have so much to do! How can I uncover everything in 22 minutes? Even though there’s no actual visual clock in the game, you feel the ticking at all times.

And yet other times, I wake up and think, “What will I find out this time? I can’t wait to try!” I know there’s a ticking clock, but I also know this isn’t the end; this is just another attempt to do everything I can. If I fail? It’s not the end of the universe, as it were; time runs out but I’ll just get to do it again. It becomes a zen experience. Every mistake will just lead to another try. You die a lot in just about every video game, but in Outer Wilds it feels like a monumental experience. 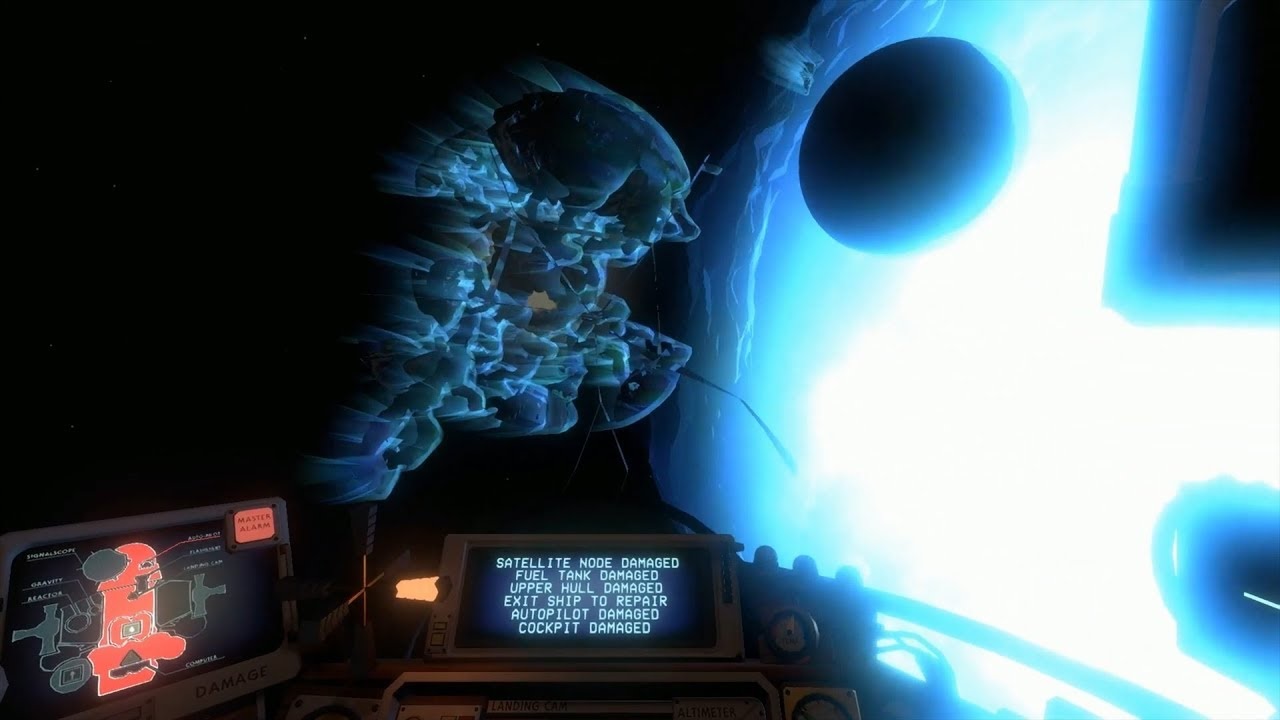 You can accomplish certain tasks only toward the beginning of the loop. For these, you have to rush to get to where you need to go to witness that specific moment. Others are only available toward the end of the 22 minutes. The game demands you wait, or explore off-course for a little while, or just enjoy the beauty of this perfectly timed balanced ecosystem. The planets orbit and rotate; pieces of the crust of Brittle Hollow eventually break away and careen into its black hole core; the storms on Giant’s Deep fling whole islands into space only to come back down again; the Hourglass Twin planets orbiting dangerously close to the sun spit sand from one to the other; it’s a kind of harmony leading toward the heat death you’ve seen over and over and over again.

And this is why I can’t stop thinking about Outer Wilds. At a time when actual life starts to feel like a constant repetition at best, an ever-hastening march toward oblivion at worst, this game gives me a strange and beautiful sense of existential ennui. Sometimes it feels like nothing matters, that regardless of how hard I try and how much I accomplish, the problems still exist outside of my control. Other times I float along and hope I at least feel content in what I’ve done in that particular loop.

If you’ve never played Outer Wilds, I highly recommend. The more you learn about the advanced travelers who came before, the more you realize nobody has it figured it out. The vastness of the universe is overwhelming and you can’t help but feel adrift. We’re all out here trying our best, and in the end, making a difference might just be as simple as turning on a light to guide someone else home.