Op-Ed: How a Non-Gaming Adult Fell Headfirst Into Video Games

I was never interested in being the bad guy. Even though as a kid I played Goldeneye 007 on Nintendo 64 and Quake on my PC, the excessive violence would turn me off as soon as a tamer form of entertainment was dangled in front of my face. And even though I dabbled in Donkey Kong and had a hell of a time, video games in general were never really accepted in my house. After my considerable affair with Tetris on Game Boy, I solemnly swore off video games for a number of years. I thought I was doing myself a favor; that I would eventually be rewarded for my disengagement with one of the biggest forms of entertainment known to man. After all, in the circles I ran with, video games were seen as socially unacceptable once you became an adult person.

But when I actually sat and thought about the fact that video games are, of course, made by adults, and many games are marketed for adults, I unsubscribed from that narrow-minded idea. I suddenly felt like a newly-minted person, ready to indulge in my long-lost hobby. Having been out of the loop for such a ridiculous time I’d only vaguely heard of the Wii console, but I went ahead and bought a second-hand one.

The first game I purchased was New Super Mario Bros., because I’m not so old that I hadn’t heard of that bouncing man with the bushy mustache. In fact, I had several repressed memories of playing Super Mario World at my cousins house when I was a tween. As soon as I entered this exciting, re-vamped Mario world, I was in seventh heaven. Here I was as an adult playing a terrific, non-violent video game! I would have shouted it from my rooftop, but that’s a little precarious in my building. 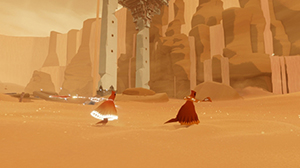 Then when I was all tuckered out with the Wii, I graduated to the major player: PlayStation 3. This seemed like a natural progression, I thought. Scanning the shelves at my local GameStop, I did a double take at an unfamiliar title: Journey. There wasn’t much information on the back of the case, beyond “Experience the Wonder” in bold capital letters, and “featuring stunning visuals and haunting music”, so I was beyond curious. I picked it up. That proved to be another good decision in my venture into adult gaming, because Journey is the ultimate definition of video-game meditation: something I never knew existed. It was like a beautiful dance in a far-off land, where a silent appreciation of nature and art become the focus points. Journey is a game I would recommend to non-gamers interested in trying something different, because even if you can’t quite decipher what’s happening at all times, it’s such a unique, magical experience. And after I played it, I was ready for anything.

My trips to GameStop became more purposeful, and I sought out titles that I’d always wondered about, like the freakishly famous Grand Theft Auto. It was within that game that I made a new discovery: being the bad guy wasn’t just about firing off the most bullets to the head. Being bad was about strategy, stealth, collaboration, discipline, and patience. That’s what it takes to pull off a heist, and you can only be successful with trial and error — just like anything in life. 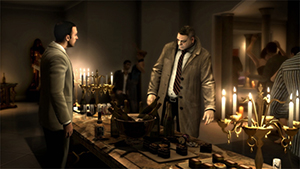 There are numerous other titles that were influential for me as an adult gamer, but if I was to mention another that resonated and continues to stick to my brain like superglue, it would be Heavy Rain. As a very emotional, atmospheric, story-based psychological thriller game, it had me invested in the characters right from the get-go. I took pleasure in being actively involved in the mystery of the Origami Killer, which twisted and turned into every direction possible — while remaining unpredictable.

Okay, what I’ll leave you with is this. I’m so not afraid of the public perception that video games are strictly for children – that I will go to bat for this article day and night for as long as I live. The fact that I’m even writing it and involved with the amazing Geek & Sundry is a blessing for me. So please, remember that playing video games in moderation is a healthy, enriching sport for all ages. And perhaps the best part is, there’s something for everyone, no matter what quirky concoction your taste buds crave.

What is a game you would recommend to someone who doesn’t like games or hasn’t played one in awhile? Let us know in the comment section below.