There might be nothing more human than looking at the night sky and trying to understand our place in the universe. Long before our ancestors learned how to write they used the stars to make sense of the world. But eventually they did record what they saw in the cosmos. And the first known instance of when they did is going on display at the British Museum. The 3,600-year-old Nebra Sky Disc, the oldest-surviving map of the stars, will be part of a new “ The World of Stonehenge” exhibit. 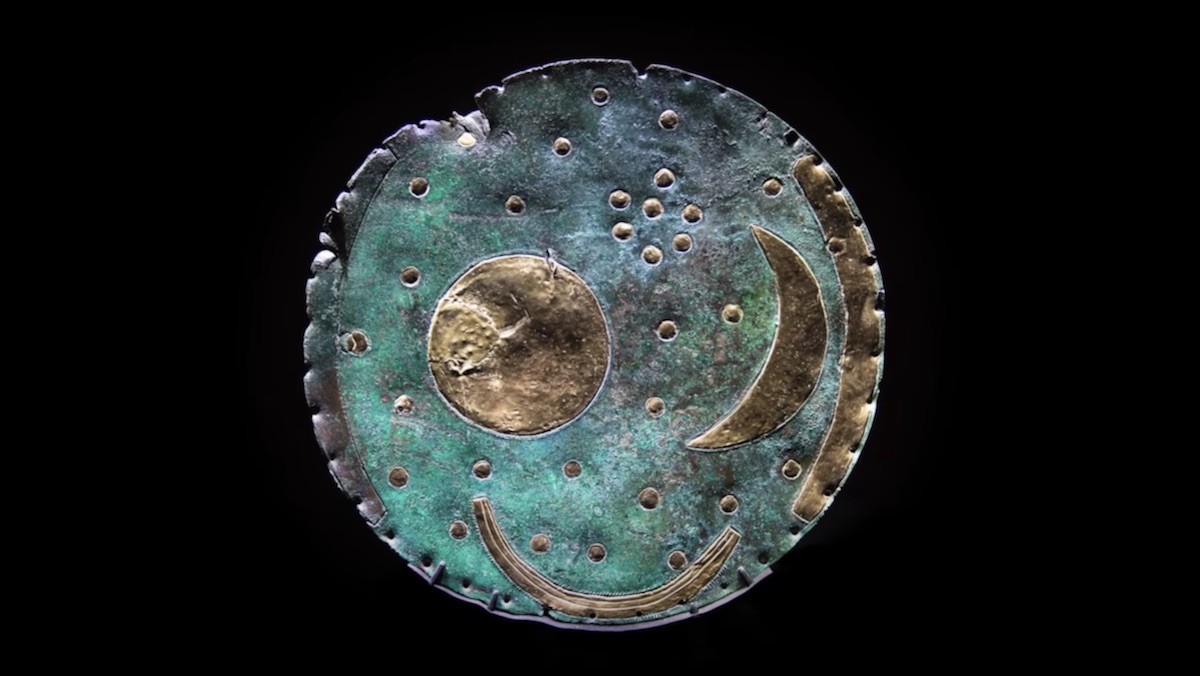 Starting February 17 and running through July 17, visitors to the British Museum will get to explore one of Great Britain’s most iconic landmarks. In what the museum calls the first “major exhibition in the UK” to reveal “the secrets” of Stonehenge, built 4,500 years ago. That will include the 3,600- year-old Nebra Sky Disc. (Which we first learned about at DesignTAXI.) It is the oldest map of the stars ever found. Discovered in Saxony-Anhalt, Germany in 1999, the exhibit will mark the first time the bronze disc will ever be on display in the UK.

The disc itself isn’t especially large. It measures only one foot in diameter. And weighs just 4.6 pounds. But it’s importance is so much bigger. The “world’s oldest representation of a “specific astronomical phenomenon” required decades of intense observation. It shows the movement of the stars and moon from a specific location. That seen from the top of Mittelberg, a mountain near where Nebra village now stands.

This round map proves our ancestors were capable of accurate cosmic measurements long ago. Here’s more from the Archaeological Institute of America:

“In the first phase, the disc showed the night sky with 32 gold stars, including the Pleiades, a gold orb representing the sun or a full moon, and a crescent moon. It served as a reminder of when it was necessary to synchronize the lunar and solar years by inserting a leap month. This phenomenon occurred when the three-and-a-half-day-old moon—the crescent moon on the disc—was visible at the same time as the Pleiades.

…Artisans next added two golden arcs to the sides of the disc, hiding two original stars. The arcs, one of which was later removed, show the horizons as seen from Mittelberg on the summer and winter solstices. At some unknown time, a stylized ship was affixed at the bottom as an allegorical symbol of the sun’s journey across the sky.”

Mankind has developed far greater tools to measure the night sky over the last 3,600 years. (Though this little map is stunning in a way some modern techniques never can be.) But our interest in the stars has always been the same. We’ve looked to them for answers. For guidance. And for their beauty. That was true long before someone made this map. And it will always be true.