Nine Inch Nails is having quite a year. The industrial rock band fronted by Trent Reznor, which was formed in Cleveland in 1988, has had a few major pop culture moments in 2019. First, Carol Danvers wore the band’s logo on a t-shirt in the billion-dollar-grossing Captain Marvel. The look was so iconic that the band got in on the action, selling official NIN/Captain Marvel merchandise on their website. Now, their music is featured prominently in a new episode of the cerebral sci-fi TV series Black Mirror, and the band is once again getting ahead of demand by selling t-shirts inspired by the show.

In the episode, “Rachel, Jack, and Ashley Too,” Miley Cyrus plays a pop star riddled with personal demons and mismanaged by an industry that feeds on female talent. She also belts a number of “original” tunes that are, in actuality, famous Nine Inch Nails songs. The songs were rearranged—with some containing brand new lyrics—to fit the pop aesthetic, but they’ll still sound familiar to NIN fans.

Not ones to ignore a good branding opportunity, the band is selling Black Mirror shirts with the new lyrics to “Head Like a Hole” on their website for $25. 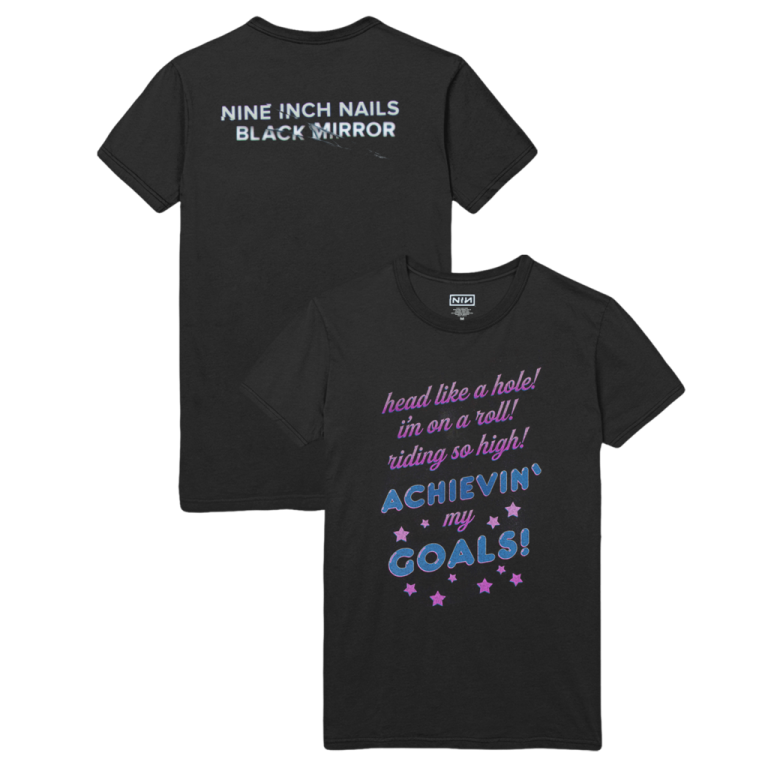 We can’t lie, these are pretty frickin’ rad. There’s something very trippy and Black Mirror-y about seeing the NIN logo paired with pop-pink stars and lettering. The band name also looks incredibly ominous sitting atop the Black Mirror logo like that.

According to the show’s creator, Charlie Brooker, nabbing rights to the songs was fairly easy. “[Trent Reznor] got it straight away,” Brooker revealed at a recent press conference. “It was via email and he was really happy. He wanted to see the script and I got to rewrite his lyrics in a chirpy way. I’m not the best lyricist in the world, and there’s one point where [Miley’s] singing ‘I’m stoked on ambition and verve’ instead of, ‘You’re gonna get what you deserve.’”

You can listen to Miley’s “chirpy” cover of “Head Like a Hole” below.

“Rachel, Jack, and Ashley Too” is the third episode in the show’s three-episode fifth season, which is currently available to stream in its entirety on Netflix. You can purchase a NIN-themed Black Mirror shirt on the band’s website here.