There’s no rest for the Marvel fan. If an Easter egg-laden poster for the upcoming Doctor Strange in the Multiverse of Madness wasn’t enough. Or a trailer for Disney+’s Moon Knight series didn’t fully satisfy. Now, fans can start dreaming even further ahead. All the way to Thor: Love and Thunder‘s release in July. Marvel has shared a look at some of the things we can expect to see in the fourth Thor movie in a creative way. Not through a new trailer or still, although those will certainly come, but through the release of a new Thor: Love and Thunder LEGO set and the announcement of other new Thor toys. These new looks at the upcoming movie actually reveal a lot, including “The Goat Boat” and what Jane Foster’s Mighty Thor will look like in the film.

As we learned previously, Jane Foster, played by Natalie Portman, will return in Thor: Love and Thunder. And she’ll get to play the first female Thor in the MCU. Of course, with the idea of variants and multiverses flying around, we don’t feel surprised to see many incarnations of our favorite characters. And we can’t wait to learn how Jane will become Thor in the movie. But for now, we can indulge in our first look at Jane, the Goddess of Thunder.

Although toys don’t always match up precisely with the on-screen versions of characters, we have to say that we dig Jane’s armored look. Jane’s Mighty Thor comes complete with a battle-ready helmet and, of course, a hammer. We don’t yet know whether the hammer Jane holds is Mjölnir proper or another version of Thor’s weapon. However, a different toy indicates that the Mighty Thor’s hammer and Mjölnir are one and the same.

We also get our first look at Thor in the film, dressed all in blue. This colorful costume seems to match the tone of the playful movie directed by Taika Waititi. Thor, meanwhile, wields his Infinity War weapon, Stormbreaker. No longer King of Asgard, and possibly no longer Thor, we can’t wait to see what our hero will get up to in his next movie. 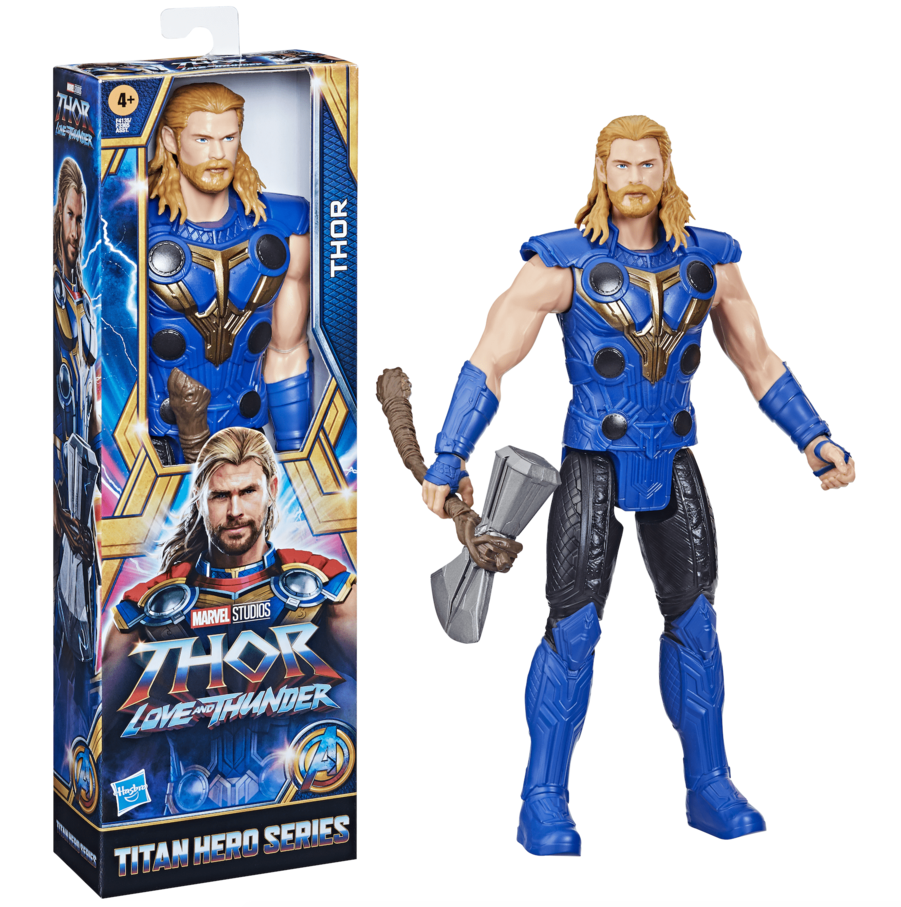 HasbroThese new Thor: Love and Thunder toys also reveal the beloved character Korg, played by Taika Waititi himself. Korg also wears blue in Love and Thunder and quite a resplendent belt. Is that a goat’s head we spy?

Speaking of goats, it looks like they’ll play a significant role in the movie. Because our first hint at Thor: Love and Thunder‘s action, courtesy of a new LEGO set, features goats. In fact, the new Thor LEGO set is called “The Goat Boat.” The Goat Boat features a giant boat and includes five minifigures: Thor, The Mighty Thor (Jane Foster), King Valkyrie, Korg, and Gorr. It also includes two legendary goats. These goats are called Toothgnasher and Toothgrinder, and they hail right from Norse mythology. We love them already and can’t wait to see them in action.

Gorr, of course, is none other than Gorr the Butcher. Christian Bale will play Gorr in the upcoming Thor film. In the LEGO set, we see the villainous character wield his god-killing weapon All-Black the Necrosword. Thor, Jane, and the real GOAT King Valkyrie had all better watch out.

Thor‘s  Goat Boat LEGO set will release on April 26. Which should tide us over until  Thor: Love and Thunder comes to theaters on July 8.