In the land of Tallil a monstrous snake known as Darkness has swallowed the sun whole and released sinister Shadows to wreak havoc on the world. Only the greatest Warriors of the Tribes of Man offer any hope of defeating the evil snake and recovering the sun from its gut. If the Warriors fail, and the sun is totally consumed, then Darkness will gain dominion over everything under the Moon and all will be lost to the cold black of eternal night.

Darkness Comes Rattling is a cooperative game of tribal horror for 2-6 players created by Kevin Wilson (Arkham Horror, Descent: Journeys in the Dark) and published by Wyrd Games. 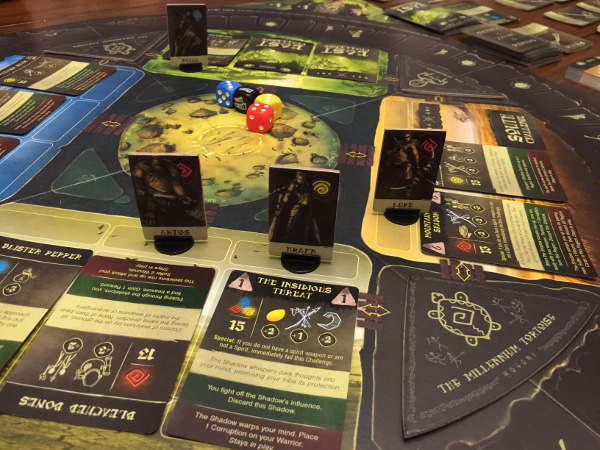 Players assume the role of Warriors attempting to save the sun from Darkness. This is done by taking turns clearing the board of corruption, scouting for and challenging Darkness’ minions, and collecting weapons and artifacts. As the players fight their battles, the giant snake slowly digests the sun and spreads corruption across the land.

Along the way, the Warriors can call upon the Four Winds and visit merchants for aid. However, the players must be cautious when doing so, because the encroaching evils of the world can corrupt the merchants, and turn the direction of the Wind in such a way that they impede the Warriors instead of providing help. Warriors also have unique special abilities that can help in the fight against Darkness. 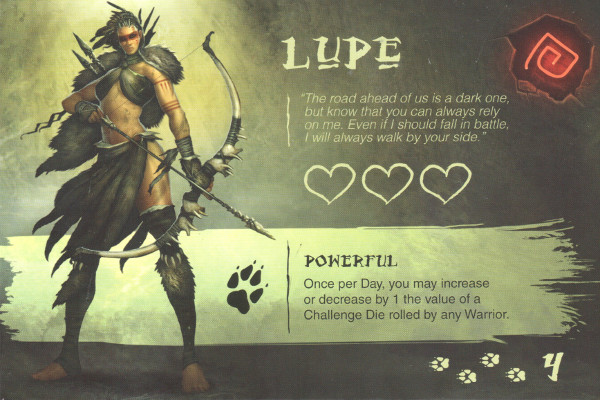 It is possible for a Warrior to be killed in battle. When this happens, the Warrior transcends their physical form and continues to fight as a Spirit. These Spirits are animals that roam the land, providing aid to the warriors while they attempt to transform back into their Warrior form. 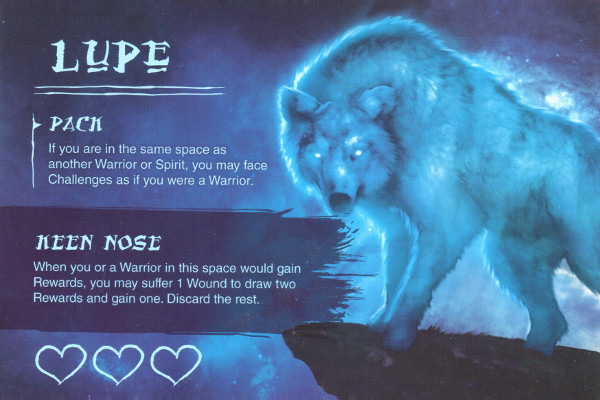 Eventually one player must enter the snake’s maw and attempt to reclaim the sun from its vile bowels. This champion Warrior will need weapons of great power and the continued support of his or her fellow Warriors in order to purge the sun from Darkness.

In many cooperative games, the players are trying to prevent something bad from happening while the game gradually gets more difficult. Usually this happens during some sort of “Progression of Evil” phase that happens between game rounds or player turns.

Darkness Comes Rattling is not one of those games. It starts with a very bad situation (a gargantuan snake just ate the sun!) and gets worse. Much worse. Quickly. And it doesn’t stop.

One of the reasons that this is a great horror game is because something terrible is always happening:

… Did you just put out some new cards? Have some corruption!

… You defeated a challenge? Cool story. Oh by the way, Darkness just choked the sun down some more.

… You flipped a card over? Maybe you should get stabbed in the face!

These bad things endlessly remind you of your uphill battle and the ticking clock. It makes for very tense gameplay. Call me a masochist, but I love this constant struggle!

When I discovered this game at Gen Con I thought the flavor text was spectacular. It was spooky and fit well with the tribal theme. Then I played the game at home and discovered that “spooky” can only be used to describe the least creepy parts of the game. Some of the cards are downright terrifying! 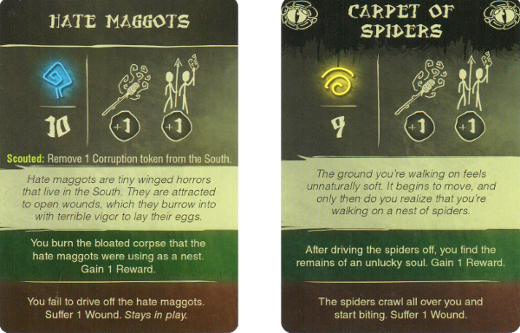 Your Warrior will have to face winged maggots that burrow into open wounds, masses of spiders, ghostly flowers possessed by the spirits of the dead, living smoke that attempts to steal your breath away, and much, much more. If you love reading horror then there’s a good chance you will love the lore established by this game and the scenarios that you will encounter.

Most of the components of this game can change in some way or another. Challenges can become corrupted or even turn into Shadow cards. The winds can change direction, providing either benefits or additional challenges to the players. Merchants can reveal their dark side and demand a greater price for their services. Warriors become spirit animals that continue the fight against Darkness in death. The rulebook itself even has a page full of variants such as a “no talking” rule while you are a spirit animal!

All of these possibilities mean there is a lot to keep track of in the game. This might be a little intimidating for novice gamers. This flux is great for a cooperative game, though. It means there is no perfect strategy that will guarantee success and it forces players to cooperate if they want a real chance at winning. Plans must be perpetually re-evaluated by everyone, making for very little downtime and nary a dull moment.

Darkness Comes Rattling is expected to be released in October 2015.