Sine the Super Mario Bros. film in 1993, adaptions of video games have pretty consistently failed me. Some of the most popular titles in video game history have been translated into film and animation, but somehow, somewhere, the hearts and souls of these games fall by the wayside in favor of big-budget special effects and paper-thin plots. With this cynicism muttering at the back of my thoughts last year, I anticipated the first season of Netflix’s Castlevania with some trepidation even though the previews looked awesome. Could they really pull it off? Would this finally rocket video game adaptions into a more favorable light? The evidence says: Hell yeah!

WARNING: SOME MINOR SPOILERS FOR SEASON 1 & 2 AHEAD 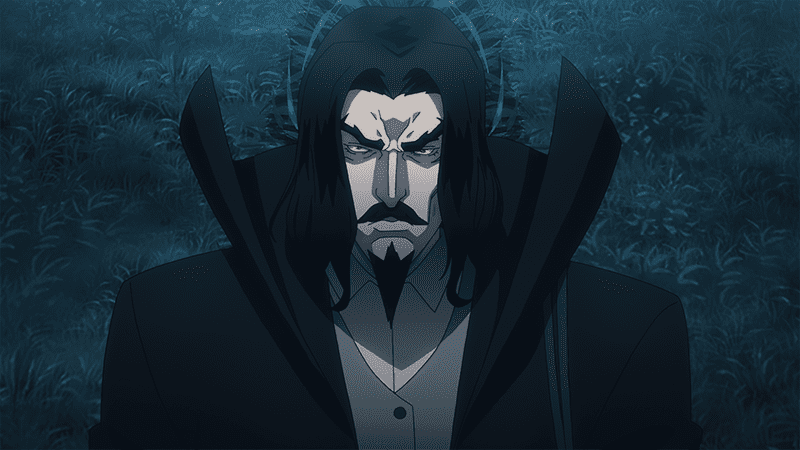 The first season of Castlevania only had 4 episodes, but it provided us with an introduction into the extremely dark, gothic horror of the games through spectacular visuals and a rich storyline. Written by Warren Ellis, the famed novelist behind comics and video games including Transmetropolitan and Dead Space, Castlevania focuses on characterization, giving us a deeply sympathetic Dracula that twists our loyalties even as we know we should be rooting for the heroes.

In this first season we learn how Dracula fell in love with a human woman; teaching her science and medicine and most likely would have left his monstrous ways behind for her if it hadn’t been for some narrow-minded men who decided to burn her at the stake for being a witch (it was penicillin, not necromancy you fools!). You can’t just kill Dracula’s wife and expect to get away with it though. Hearing that his wife was murdered, Dracula is so wounded by her loss that he decides humanity has run its course and it’s time to wipe man from the face of the earth. Dracula may be a monster, but here he is just a grieving man lashing out at the world in his despair. 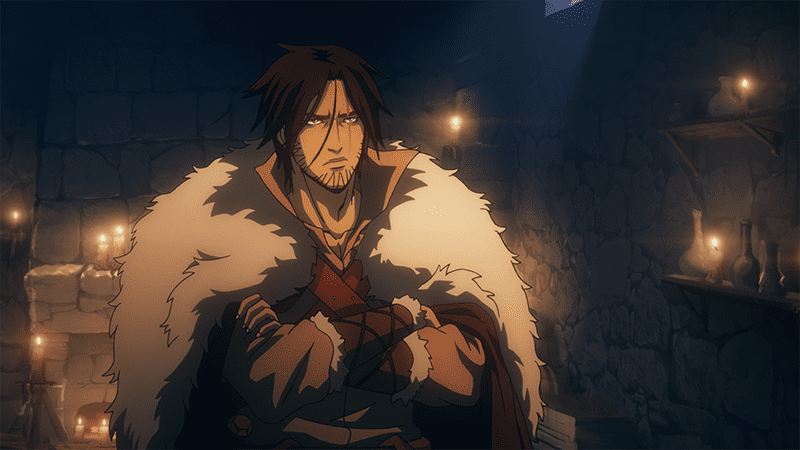 Our hero, a drunken, sarcastic Trevor Belmont, becomes embroiled in the chaos around Dracula’s awakened thirst for vengeance when visits the town of Gresit and runs into a group called the Speakers. The townspeople of Gresit have decided the Speakers are the reason Dracula is attacking them (conveniently forgetting the whole burning Drac’s wife thing) and to want to kill them. The speakers won’t run for their lives until they locate one of their own that went missing: Sypha Belnades. Trevor agrees to help them, rescues Sypha from a giant cyclops, and learns she is one badass magic-user. Trevor & Sypha fend off the town, help the speakers escape, and accidentally discover Alucard (Dracula’s son) sleeping in a tomb beneath the town. The three of them join forces and begin preparations to fight Dracula himself in an effort to save mankind. 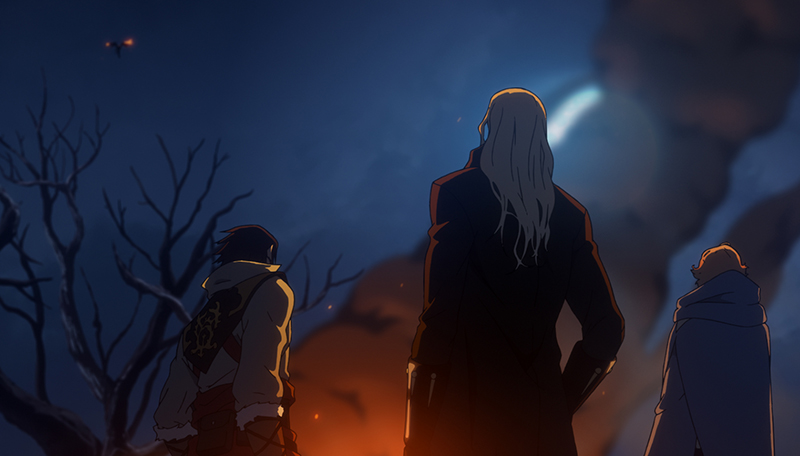 That was a lot to pack into four short episodes and somehow showrunner Adi Shankar managed it with a deft hand. Those episodes did a fantastic job of getting you into the lore and wanting more so I was thrilled when season two recently released with double the episodes and double the feels. Season two gives us even more Dracula as he assembles his armies while the trio of heroes searches for a way to track down his teleporting castle. 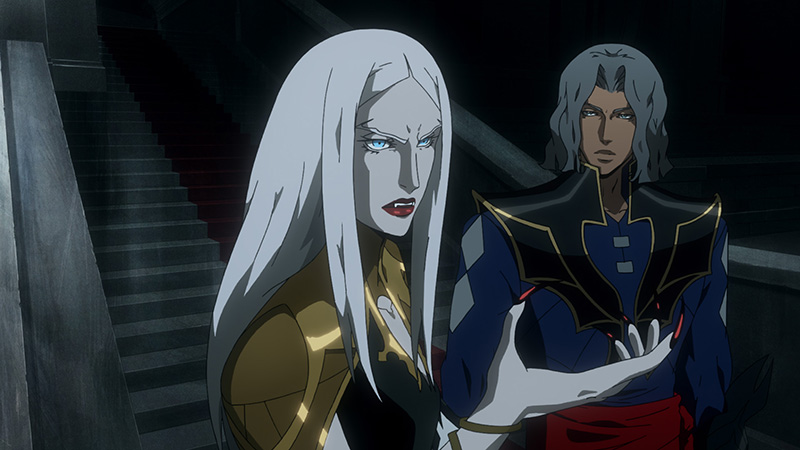 Many of the episodes show us the internal struggles between Dracula and his vampire subordinates including the extremely devious and alluring Carmilla. None of the vampires are quite cool with the fact that Dracula decides to leave the battle strategy in the hands of two human devil forgers. Considering his hatred to humans, Draculas choice of generals might seem confusing at first, but we get to see how he earned their loyalties and once again the show hands us a bucketful of conflicting emotions.

Sure ol’ Drac used to rip men to pieces with his bare hands with fervor and yeah he does want to annihilate the human population of the world, but when you see it from his perceptive it’s hard not to feel for the guy. On the other side, we get the comic relief from the boyish interactions between Alucard and Trevor, who argue more like brothers than newly-met compatriots. The show whips you back and forth between dread, laughter, and sorrow. Not to spoil anything but finally seeing Dracula in combat was astonishing and the emotional weight of the season and its ending were even more so.

I won’t spoil this past season anymore for you if you haven’t seen it, but in my opinion, Netflix’s Castlevania has really elevated the bar for future video game adaptions. Season three has already been confirmed and I cannot wait to see what they do with this franchise next.

What do you think season 3 holds in store for us? Let us know in the comments below and be sure to tune into Game Engine on Twitch and Alpha for more video game goodness every Tuesday starting at 4PM PT.