There is a growing epidemic that now plagues nearly two billion people worldwide. Its deleterious effects include elongated eyeballs and serious impairment of vision. But this epidemic is not due to a disease, and does not spread from person to person; instead, this is an epidemic of a disorder. Those researching it aren’t even certain of what’s causing it to increase in prevalence. The epidemic is myopia, and a reminder that the disorder is still spreading, especially amongst young people, was recently served up by science writer and novelist, Robert Roy Britt.

Mysteriously misshapen eyeballs are causing an epidemic of #myopia, ruining the vision of millions of young people. We won’t know how bad it’ll get until young generations age. I looked into likely culprits & it’s not just #smartphones. https://t.co/CpIisgS6WS

Britt, a former editor-in-chief at at Live Science and Space.com, published his update on the myopia epidemic on Elemental, and gave it the Twilight Zone-esque title, “Something Is Causing Our Eyeballs to Elongate.” The article does an excellent job of summarizing the extent of the strange phenomenon that now affects somewhere in the neighborhood of 40% of the population in the U.S., and roughly 1.9 billion people worldwide, but what is most fascinating, and disturbing, is the insight it gives into the way the disorder has increased in severity amongst young people.

In Britt’s article, Langis Michaud, a professor of optometry at the University of Montreal, says that “‘every week he sees children as young as seven whose myopia is as bad as the 18-year-olds [was] from 35 years back.” Without intervention, Michaud says those children “‘will become highly myope and will face pathological consequences.'” And, unfortunately, that anecdotal evidence is backed up by plenty of statistics. 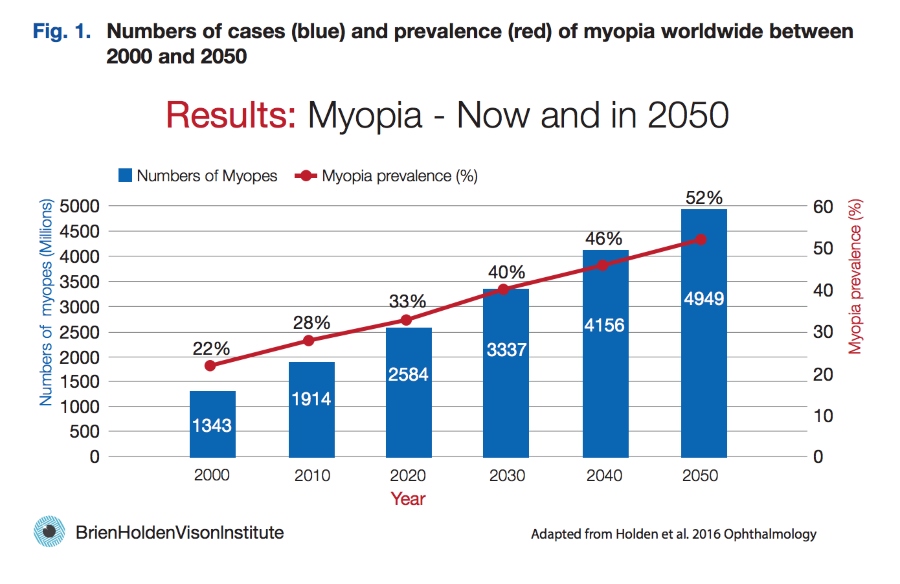 According to the American Optometric Association (AOA), for example, “More than 40 percent of Americans are myopic and that number is increasing at an alarming rate, especially among school-aged children.” The AOA also says that “one in four parents have a child with myopia… and about three quarters of children with myopia were diagnosed between the ages of 3 and 12….”

And while the myopia epidemic is clearly getting worse amongst children worldwide, it is especially bad amongst children in Asia. The Optometry Times says that the worldwide rise in myopia cases has been seen “most dramatically among younger people (college educated and high school graduates) in East and South Asia where the prevalence has reached almost 100 percent in some demographics….” The American Academy of Ophthalmology says that “In Asia, up to 90 percent of teenagers and adults are nearsighted [as of 2018].”

A video offering a simple explanation of myopia.

This rise in the number of children with myopia across the globe obviously has researchers scrambling to find the causes of the epidemic, but as of now, they’re still unable to say definitively what may be the culprit. Of course, there is the obvious answer of people constantly staring at electronic screens. However, that hypothesis isn’t as cut and dried as you might think.

For example, The American Academy of Ophthalmology says that there is “evidence that at least part of the worldwide increase in nearsightedness has to do with near work activities; not just screens but also traditional books,” but adds that “It remains unclear whether the rise in nearsightedness is due to focusing on phones all the time, or to light interacting with our circadian rhythms to influence eye growth, or none of the above.”

Adding to the confusion is research showing that there is a correlation between education levels and the likelihood of having myopia. There was a 2013 study undertaken by researchers at Mainz University Medical Center in Germany, for example, which found that, out of the 4,658 Germans examined, 24% of those suffering from nearsightedness had no high school education or other training, 35% had high school or vocational school degrees, and 53% had university degrees.

By 2020 50% of the world population will be short-sighted (myopic)!!! Myopic patients are more likely to develop health problems with their eyes, so research is under way to find ways of preventing short-sightedness. #myopia #shortsighted #glasses #eyesopenopticians #eyehealth pic.twitter.com/pQJwXOHqSE

Although the causes of the myopia epidemic are still unclear, there are some simple steps that not just children, but all of us, can take to mitigate the odds of developing the disorder. Britt’s article lays those steps out more thoroughly, but, in essence, people should spend less time in front of screens and more time outside—as sunlight can help to slow eye growth. People should also keep screens at arm’s length, zoom in on screens to make text larger, and utilize the “20-20-20” rule, which states that you should take a break from looking at your screen every 20 minutes to look at something 20 feet away for 20 seconds. And we’ll add to that rule the stipulation that it should take effect in schools everywhere in the year 2020.

What do you think about the growing, worldwide myopia epidemic? Do you have any ideas on how to stop the spread of this disorder? Give us a crystal clear look at your thoughts on nearsightedness in the comments!